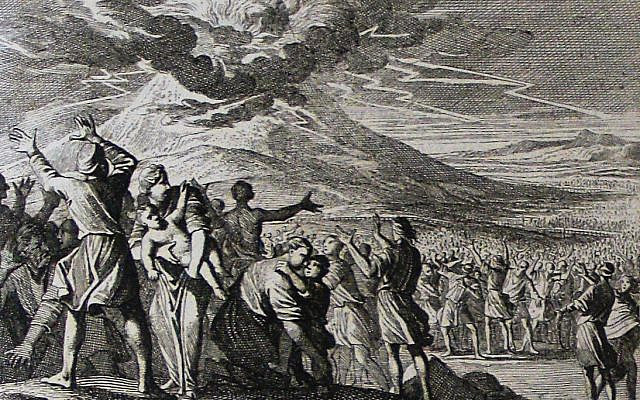 One of the last mitzvot in the Torah is that of Hakhel, the “gathering together.” On Sukkot following the Shemitah year–the year in which we find ourselves right now–the people would all come together so that, standing as one, they would be fully present as individuals and as a complete community to hear the Torah being read.

The purpose of this gathering is no doubt educational, “that they may hear, and that they may learn, and fear the Lord your God, and observe to do all the words of this law” (Deut. 31:13). The experience, however, was not just intellectual, but experiential as well. It was a very specific type of experience: a reenactment of the standing and receiving of the Torah at Mt. Sinai.

The verb that the Torah uses here to gather the people is hakhel, from the word kehal, or community. Significantly, in Devarim, and only in Devarim, the day of God’s giving of the Torah at Mt. Sinai is referred to as yom hakehal, the day of assembly (Deut. 9:10; 10:4; 18:16). What’s more, there is a direct parallel between the words used in the Torah’s commanding of the Hakhel and the words used in Devarim when God commands Moshe to gather the people at the foot of Mt. Sinai:

Experiencing Hakhel as a reenactment of the Giving of the Torah can have a deep visceral impact on the individuals participating in it and on the people as a whole.

For the individuals participating in it, it turns the learning of Torah–our central, daily mitzvah–into much more than an intellectual pursuit. It makes us realize–no, feel–that this Torah is directly from God, it is God’s direct communication with us, and by engaging in Torah, we foster a direct, lived connection with God. Learning Torah becomes a religious activity, a way of drawing close to God and bringing God into our lives.

For the community as a whole it underscores a central message of who is part of this relationship with God, who was present at the Giving of the Torah and who continues to be present when the Torah is given again and again, every seven years.

That phrase “kol kehalkhem”–your entire community–is used earlier in Devarim (5:19) to emphasize that it was the entire people who stood at Har Sinai. The need to underscore that the entire people were present becomes clear when we consider Judith Plaskow’s central insight in her book Standing Again at Sinai.

Plaskow points out that according to the simple reading of the text in Exodus, the Torah was given primarily to the men: “Be ready for the third day, do not draw close to a woman” (Ex. 19:15). In other words, the men, who were the ones to receive the Torah, needed to be pure and thus could not be intimate with their wives beforehand. The Rabbis, however, reverse this, putting women at the center. For them, the problem here was that the women would be impure, that they would be the ones who would risk being excluded. The Rabbis also famously read the verse: “So shall you say to the House of Jacob and declare to the Children of Israel” (Ex. 19:3) to include women, “the ‘House of Jacob,’ Beis Yaakov, refers to the women, and the ‘Children of Israel’ refers to the men” (Shemot Rabbah 28:2)–placing women front and present at Mt. Sinai.

The Rabbis, I believe, took their cue from how our parsha, and Devarim as a whole, go out of their way to explicitly state that women were present at this moment and that they are an equal part of the ongoing covenant with God. The beginning of last week’s parsha, Nitzavim, begins with Moshe declaring to the people that they were all standing there at that moment to enter into the covenant with God, all of them: “Your heads, your elders, your men, your children and your women and the sojourner in your midst” (Deut. 29:10). This theme is continued and reinforced in the mitzvah of Hakhel where the Torah commands that we are to gather “the people, the men, women and children and the sojourner in your midst” (31:2).

Our parsha goes further and, in a shocking way, implicitly declares women’s equal presence before God not only at the original receiving of the Torah and not only once every seven years during Hakhel, but each year, during every one of the three pilgrimage festivals. The Torah states that Hakhel is to take place on Sukkot when: “All of Israel comes to be seen by the face of God” (31:11). The experience of being seen “by the face of God,” refers to the mitzvah of re’iyah, of appearing in the Temple during these festivals, a mitzvah which the Torah previously, and repeatedly, underscored applied only to the males (Ex. 23:17, 34:23, Deut. 16:16). Here, the Torah is saying that while an aspect of that mitzvah might be limited to the men, it is all the people–men and women alike–who present themselves before God (see Yerushalmi, Hagigah 1:1).

The powerful message for us is that when it comes to the learning of Torah, men and women must be equal. Torah is, and must be, accessible to all. All must receive equal education and develop the same skills so that Torah, in all its forms, can be something within each person’s reach.

And it is more than access and learning. It is, as Hakhel was, the experience of receiving the Torah, of encountering Torah as God’s word, of learning Torah as a religious experience.

It is for this reason, I believe, that the Rabbis ruled that in principle women can receive an aliyah to the Torah (Megilah 23a). The practical application of this is, as we know, hotly debated, and yet in all this debate the key point is often lost: the Rabbis included women at a fundamental level in the ritual that connects us in a very physical and visceral way to the Torah.

This visceral experience is, for me, what is so powerful about the yeshiva culture, what it means to be surrounded by a community of people learning Torah, to be hearing from all sides the kol Torah, the sound of Torah, emerging from the discussions and debates of each havruta, two-person pair, jointly grappling with the meaning and relevance of the text. This experience, too, must be equal for everyone. All must have the opportunity to immerse themselves in the learning of Torah and to do so in a religiously intense culture of striving for understanding and mastery.

Let us undertake, this Shemitah year, to fulfill the mitzvah of Hakhel by making its ethos and its values our own and by translating them into the deep and systemic structures of our community, so that we all may have an equal place in the learning of Torah and in the striving to connect to the Giver of Torah.