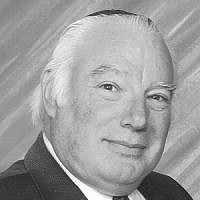 The Blogs
Harley Felstein
Apply for a Blog
Advertisement
Please note that the posts on The Blogs are contributed by third parties. The opinions, facts and any media content in them are presented solely by the authors, and neither The Times of Israel nor its partners assume any responsibility for them. Please contact us in case of abuse. In case of abuse,
Report this post.

Prior to World War II, Lithuania had a thriving Jewish community of some 240,000 men, women and childrenת but in the course of the Holocaust, that community was decimated, with more than 90 percent killed by the Nazis. Years of Soviet domination did not serve to heal the wounds, and today, Lithuania’s Jewish population has shrunk to a mere 4,000.

In recent years, though, many Lithuanians have sought to grapple honestly with the horrors of the past, to write a new narrativeת educating young people about Jewish culture, seeking the truth about the country’s history, and building new relationships. Just over a week ago, the Lithuanian government made forward progress in establishing a fund of more than $50 million to compensate Lithuanian Jews whose property was stolen from them during the Holocaust and the Soviet occupation. The money will be used to support Lithuanian Jewish heritage.

Lithuanians of goodwill continue to face an uphill battle, however. Not only does anti-Semitism still play a role in daily life there, but those in the “grandparent generation,” who retain a living memory of the horrors of the Nazi genocide, are reaching the end of their lives. It is crucial that we reconnect Lithuanian Jews and their Diaspora descendants to their Lithuanian roots while we still can. There is no better time to address these issues than in the lead-up to Holocaust Remembrance Day, to be commemorated this year on April 19.

This will be no small task. It will involve both looking closely at our history to assess and acknowledge the roots of often controversial issues, and making a conscious effort in moving forward to build stronger relationships between the Jewish people, wherever they may be, and the Lithuanian government and people as a whole.

No small task, indeed – but not only is progress possible, it’s already begun.

Nurture a shared sense of history

This past year, for instance, the Embassy of Lithuania sponsored a cantorial concert in Washington, D.C., to benefit Jewish cemetery restoration, and in the spirit of sharing traditions, Ambassador Pavilionis hosted the Embassy’s first joint Hanukkah and Christmas holiday party, which included a celebration of the traditional Christmas Eve dinner tradition of Kucios. These may seem like small gestures, but given Lithuania’s history, the initiatives should be seen as nothing short of revolutionary.

An even greater step forward, however, has been the ongoing cooperation between Lithuania’s government and the US Holocaust Museum, training Lithuanian high school instructors to teach accurately and completely the history of the Holocaust, and to use the tragedies of the past to address issues of human rights and mutual tolerance today. With feet firmly planted in the realities of our shared history, and eyes on the future, these educational efforts have the potential to fundamentally change how the Holocaust is understood by the Lithuanian people – and what the future holds as far as appreciation of Lithuania’s Jewish past and once-rich diversity.

But these efforts must have broad support if they are to bear fruit. Chicago is the heart of the American Lithuanian community – a quarter of a million of us live here, and our community is flourishing. The Balzekas Museum of Lithuanian Culture is the facility in America most dedicated to the preservation and perpetuation of Lithuanian heritage, and we are fortunate to have Draugas, a newspaper published in Chicago in Lithuanian. Chicago is not just where Lithuania’s past comes to life in the United States; it is simultaneously our chosen home, firmly rooted in our rich heritage.

If we want to write a new narrative, if we want to see a genuine transformation of the very nature of Lithuanian-Jewish relations, we will have to play our part. We must act to reduce tensions between the Lithuanian government and the world’s Jewish communities; to foster cultural exchanges between the Jewish and gentile youth in both countries, as well as with Israel; and to actively celebrate the rich Lithuanian Jewish heritage, bringing these communities together in a shared future.

The urgency to do historical justice in the name of Lithuania’s Jews has never been stronger than right now. As the older generation ages, and the distance from the Holocaust grows, we risk losing critical information and vital insight. The tens of thousands who perished in our ancestral homeland deserve so much better. And today’s young people deserve to know the truth about the past, not to be shielded from harsh realities or told incomplete truths in some ill attempt to protect them. As is often said, the truth will set us free.

If we choose to act, we can nurture a shared sense of history and respect, one that honors our dead, and gives their memory a role to play in our future. Rather than hide from the past and its horrors, we can work together to ensure that its lessons are learned, and the culture of an entire community is not lost.

And speaking frankly: What better rebuke to those who perpetrated these crimes? Not only did the Jewish people survive the slaughter – its members are today forming bonds with the descendants of those who once sought to destroy them.

Let us do all we can to deepen those bonds – in memory of those who will not return, and in the name of those yet to come.

About the Author
Harley Felstein is the founder of the Sunflower Project: A Jewish Lithuanian Heritage Project
Comments