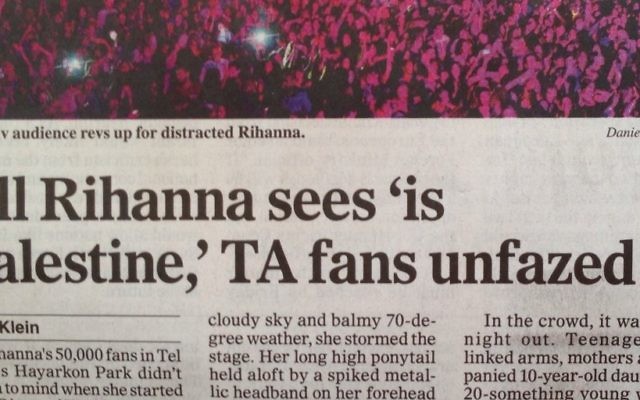 Israeli newspaper Ha’aretz published a false account in English of a concert by international superstar Rihanna in Tel Aviv this week. Hours later, and after featuring the mistake in a headline on the front page of their printed English paper, they withdrew their claim ($ pay wall).

Their report claimed the singer said the word “Palestine” in a song. Some of the world’s major news blogs which repeated the claim, like the Huffington Post, have now amended their coverage to reflect Ha’aretz’s retraction. The story swept across the Arab world and the majority of those sites have not withdrawn the false report.

Ha’aretz’s coverage of Rihanna’s concert in Tel Aviv contained two unique claims not presented in any other coverage of the concert:

Long before the print version of the story came out, Jerusalem Post’s reporter, Lahav Harkov, first questioned Ha’aretz’s online review in a tweet.

The first claim has been completely withdrawn with an apology. The second still stands in the article.

Thus far I present only facts. Time for opinion: this is MY opinion piece, I only mention this because we have a few people still unable to tell the difference between news and opinion. I am not in the employ of The Times of Israel, I’m one of their thousands of bloggers.

The second claim is the smoking gun. It’s the big, important one. It’s possible to mishear a rhyme: it happens all the time.

The second is the one I highlighted at Israellycool yesterday.

Let’s walk through what happens for these two tandem claims to make it into print and we’ll see epic journalistic failure coupled with a devotion to inserting Palestine into any story they can.

A freelancer makes two strange claims. The “misheard” quote was only misheard by the journalist or people she was immediately with: she gives no specific source. It’s a substitution of a well known lyric so perhaps asking some of the other 55,000 witness would have been journalistically sound.

What about a search on social media to see if anybody else caught the switch? Nobody did.

Other online news sources, like The Times of Israel, all failed to notice this very public switch.

Did any of those avenues for fact checking occur to any of the people from the journalist to the typesetters? Apparently not. The first time they managed to fact check this was hours later when blogs like Michael Dickson’s here and mine at Israellycool linked to a phone video.

This is the quality of fact checking we have today in the internationally important Ha’aretz English edition? Notice that Huffington Post and the entire Arab world did not repeat the stories from JPost, The Times of Israel or any other source. They went straight to Ha’aretz.

We’ve established this is unbelievably sloppy journalism leading to an internationally significant error with repercussions that do not end with an online retraction.

Which brings us to point 2. Had we just had a misquote we might believe this was a simple mistake, as at least one desperately defensive Ha’aretz blogger is trying to claim.

Even more egregious is the claim that by saying “Tel Aviv” in the concert, she was somehow not saying Israel (taken from a Lebanese version of Ha’aretz’s piece):

The singer made mention of Tel Aviv multiple times during the show, shouting out to the crowd, “You know I love my friends all over the world, but it’s been too long since I’ve been back here in Tel Aviv,” without mentioning Israel itself.

Rihanna obviously doesn’t recognise Turkey, either, as she started her concert there with the words: “Istanbul. What the fu*k is up!”.

I’ve been to a few gigs in my time and I’m racking my brain to remember when an artist greeted a whole country. Artists nearly always mention a city. Or even a specific venue. “Hello Hammersmith” or “Hello Wembley” I remember hearing frequently at concerts I went to in London (United Kingdom of Great Britain and Northern Ireland said no singer ever).

I’d also say the inference of her not saying Israel, from the fact she said only Tel Aviv is pretty far on the spectrum from news to opinion. Obviously a concert review is the opinion of the reviewer so we’re in blurred territory, but this piece is written by a journalist not a well known music reporter. It should be regarded as a news piece.

And when Sir Paul McCartney played this same venue in Tel Aviv in ’08 I remember him clearly saying “Shalom Tel Aviv”. He even nailed the “Shalom” pretty well. No biggie. We all know Tel Aviv is in Israel.

Why does a reporter with 15 years experience not know that artists in concerts don’t say the name of a country? Why does nobody in the same editorial chain which passed the quote know this simple piece of concert etiquette?

Were this the first attempt by Ha’aretz’s writers and editors to shoe horn Palestine into a story and some how politicise a totally apolitical event, some of us in “unhinged corners of the Internet” might buy this explanation ($ pay wall):

Reporters make mistakes. Editors fail to catch the mistakes of reporters, and can introduce new errors of their own.

However we don’t. We can remember when Ha’aretz came up with a false land grab story, retracted a story about a ban on Arabic at a hospital or moved Israel’s capital from Jerusalem to Tel Aviv. Or any of the other 570 results CAMERA has for Ha’aretz. We remember damaging and malicious mistranslations of Hebrew and their lies about forced birth control on immigrants.

We have two possible, reinforcing conclusions:

I have looked hard for a “mistake” in Ha’aretz which paints Bibi or Likud in an uncommonly favourable light. Surely pure “mistakes” would occur evenly across the political spectrum?

Neither conclusions look great for Ha’aretz and I’d say both are taking a firm toll on its reputation and circulation. Unfortunately it appears the vast number of errors made in their pursuit of journalistic ineptitude happened to align with their well known politically biased agenda.

And so, I assert, there exists within this otherwise stupid piece about a fairly poor concert, a state of “mens rea”. This drives many at Ha’aretz to take what may have been a mistake and use it to push its marginalised and discredited views on “Palestine”.

Ha’aretz has a collective groupthink which is guilty of defaming Israel repeatedly.

[Updated by author 27/10/2013 to add recognition and link to Lahav Harkov’s initial questioning tweet. For her full account: Reporter’s Notebook: The truth about Rihanna, not the ‘truthiness’]