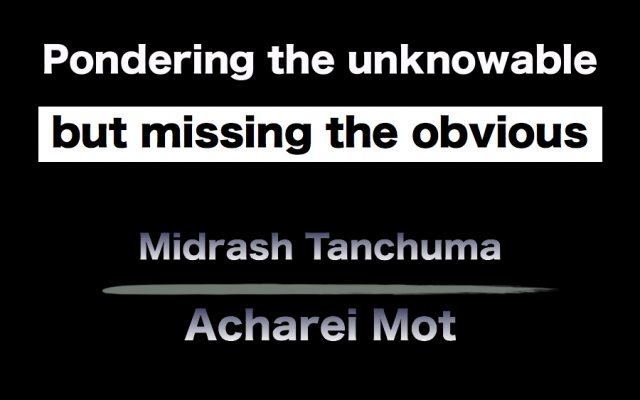 Midrash Tanchuma never shies away from exploring tough theological questions, and the death of Aaron’s sons is no exception. To help us feel the true magnitude of the incident, the Midrash focuses our attention on one person – the grieving mother,  Elisheva. She had so much to be proud of.  Her husband was the beloved High Priest, Aaron, and Moses was her brother in law. Elisheva’s  brother was the leader of the tribe of Judah, Nachshon. Now 2 of her sons were about to take an active role in the priesthood as well. In an instant all that pride and glory turned to tragedy.

What factors contributed to the death of Aaron’s sons

The Midrash explores the fact that Nadav and Avihu, were not exactly blameless. Even in the way the Torah describes the event you see that something had gone awry

“..and they offered before G-d an alien fire, which He had not commanded to.” (Leviticus 10:1)

By no coincidence, nine verses later we find the prohibition against performing the Temple Service while intoxicated:

“Drink no wine or other intoxicant, you or your sons, when you enter the Mishkan… “(Leviticus 10:9)

The Midrash mentions several more laws that were violated which likely contributed to this tragedy. Nevertheless King Solomon puts Nadav and Avihu in a category of righteous people  who suffered unfairly.

Is the fate of the wicked and righteous the same?

In the Book of Ecclesiastes, King Solomon points out injustices in the way punishments were meted out to the righteous and wicked throughout history:.

“Solomon scrutinized all (past and future) generations and saw what befell the wicked also befell the righteous and he said ‘All that happens under the sun is bad.”’(Ecclesiastes 9:3)

Here are some of the ironies that Solomon points out:

– Both Moses and the spies were prohibited from entering the Land of Israel.

Bringing us back to our original question, the Midrash adds 2 more conundrums to Solomon’s list:

– The righteous sons of Aaron perished by a fire from G-d. So did the Korach and his followers who rebelled against Moses.

– The Roman general Titus entered the Holy of Holies (which only the High Priest was allowed to enter on Yom Kippur) and emerged unscathed. While the sons of Aaron approached the altar and lost their lives.

These ironies prompted Solomon to proclaim in Ecclesiastes:

“The same fate awaits the righteous and the wicked, the good and pure and the impure, the one who sacrifices (to G-d) and the one who does not sacrifice.” (Ecclesiastes 9:2)

Solomon felt that he too was punished unjustly

According to the Midrash, Solomon records in Ecclesiastes that at one point in his monarchy he was dethroned by a look-alike angel. Solomon was forced to go begging at the synagogues and study halls. He would proclaim “I am Kohelet who was king of Israel in Jerusalem” (Ecclesiastes 1:12). However, people treated him like a deranged imposter.

The Midrash explores King Solomon’s injustice.  It seems that he himself violated every precept of the Torah that was meant exclusively for a king of Israel. Precepts that are clear and unambiguous.

Regarding a Jewish King the Torah says: “Don’t own a multitude of horses” (Deuteronomy 17:16). Yet, according to the Book of Kings he had “Forty thousand horse stables” (Kings I: 5:6).

A king is further prohibited in the Torah from having  too many wives “He should not have an abundance of wives”  Yet the Book of Kings states that he had hundreds:  “And (King Solomon) had seven hundred wives” (Kings I: 11:3).

He was also prohibited from amassing gold and silver  “And he should not have an abundance of gold and silver.” (Deuteronomy 17:17). Kings I says that he amassed so much silver that it became worthless. There was so much gold that even the weights in the marketplace were made of gold.

Striking similarities between King Solomon and Nadav and Avihu.

To the outside observer armed with all the facts, Solomon’s punishment  may not seem so difficult to understand. After all, the Torah even spells out the reason for these laws that applied only to a king: “..so his heart won’t go astray..” (Deuteronomy 17;17).

Ironically, at the outset we focussed on the pain of the bereaved mother, Elisheva, who had so many relatives among the leadership of Israel.  It seems that Nadav and Avihu where also aware of their family connections and it contributed to the fact that they were still single:

“They (Nadav and Avihu) said, ‘Our uncle (Moses) is king, Our father is  High Priest. Our uncle is the leader of a tribe and we are assistant Priests. Which women would be good enough for us.’”

“When will these elders pass on (Moses and Aaron) so we can take their place?”

By sharing the story of his temporary downfall, perhaps King Solomon’s is admitting  that his exalted stature made him insensitive to the laws of the Torah that he was commanded to uphold. Which, as the Midrash implies, is exactly what happened to Nadav and Avihu as well.

Furthermore, many commentaries have pointed out that king Solomon may never have proclaimed that the way G-d runs the world is unfair?  Rather he was sending a fundamental message to the reader. At times life seems unfair because we don’t have the full picture in front of us. The fact that G-d’s ways seem mysterious and incomprehensible merely reflects the limitations of human perception.

Like King Solomon, perhaps we too ponder the unknowable but miss the obvious.