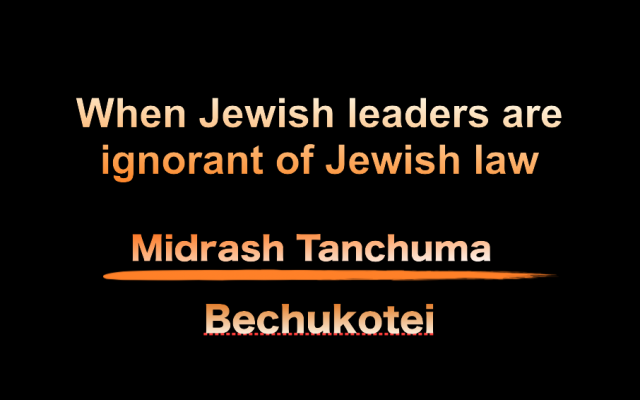 Parshat Bechukotai is one of the two places in the Torah where a “Tochacha” – a rebuke – is presented. The Jewish People are told in very stark terms that if they keep the Torah they will live securely in the land of Israel. If they don’t,  they will experience untold hardships including exile, starvation, disease and death. Unfortunately, the later reads like the  abridged story of Jewish history.

The Midrash spends lots of time on one tragedy that seems unrelated. A Jewish leader and general named Yiftach makes a tragic mistake because of his ignorance of Jewish Law. The story appears in the Book of Judges but, as is characteristic of the Midrash,  we are provided far more details. If we can answer the question of what this story is doing here, we can unravel the central message of the Midrash for this Parsha. But first, the Midrash sets the tone for the Parsha.

Hidden themes in the word “Bechukotai”

The root of Bechukotai is “Chok.” It’s often used to describe a law for which the Torah gives no explanation or rationale. For example, the laws of Kashrut. Many people speculate about its health benefits but essentially, we don’t know the reason. We adhere to the laws of Kashrut simply because this is what the Torah asks of us.

A “Chok” can also refer to an immutable law of nature like gravity or the rotation of the planets. The Midrash expands the definition in a creative way by proposing that wisdom be considered a “Chok” as well. After all, one would think that wisdom would be universally respected and sought after – almost like a law of nature. Of course the Midrash finds that just the opposite is true. It was only because wisdom was trampled on that we have tragic events in the Bible like the flood and the Tower of Babel. King Solomon was the wisest man yet his many wives took his heart away from the Torah. Before you know it, you had a Jewish king, Menashe, putting idols in the Temple. Throughout Jewish History we turned our back on G-d despite all the warnings. This was clearly a suspension of wisdom.

All of this begs the question, why did G-d entrust the Torah to mere mortals in the first place. This is exactly what the angels asked:

The angels could not fathom the utility of Mankind

According to the Midrash, the angels appealed to G-d to reconsider creating mankind because they will surely break the laws of the Torah. G-d asked them who then will keep the laws. The angels  gleefully answered “We will fulfill your Torah.”  G-d challenged them by citing laws of the Torah they can’t possibly fulfill.

This is reminiscent of another incident in which G-d asked Moses to stand up to the angels and defend G-d’s decision to give the Torah to the Jewish People.  (Talmud Shabbat 88b) Moses asked G-d to name some of the laws in the Torah.  As G-d mentioned each of the 10 commandments Moses challenged the angels:

“I am the Lord your G-d who took you out of the land of Egypt.”

Moses asked the angels if they were ever slaves in Egypt. Do they need a prohibition against idol worship, working on the Sabbath, swearing falsely, stealing, murder, adultery, etc.

In our Midrash G-d challenges the angels in a similar manner. G-d mentions laws pertaining to death, childbirth, and animals that are not Kosher to eat.

Angels don’t seem to comprehend the complex, ennobling interplay between Man and G-d. Oftentimes we have to fall in order to grow. This, in turn, has the potential to bring us closer to G-d. An angel’s diminished ability to sin is a dramatic limitation which inhibits its potential for spiritual growth.

G-d also reminded the angels that the Jews have set up a functioning Tabernacle which enables G-d’s presence to be among the people. Finally, G-d showcases a practice which shows the love that the Jews have for G-d. As mentioned in our Parsha, someone can vow to donate a sum of money to the Temple which represents the person’s own worth. It’s a predetermined amount but it conveys someone’s heartfelt gratitude to G-d. It reflects someone’s desire to give his entire being to    G-d. Add that to the list of things the angels can’t do.

The dire consequences of a Jewish leader’s ignorance

Yiftach was the military and political leader of Israel. Before going to war he made an ill-conceived vow to G-d. If G-d would grant him victory he would sacrifice whatever came out of his door to greet him upon his victorious return. The Midrash lets us know G-d’s reaction to the vow:

“If what emerged from his home was a dog or a  pig or a camel, would he sacrifice those to Me? Therefore G-d arranged for his daughter [to greet him]”.

Yiftach was distraught to see his daughter come to greet him.  His ignorance in making the vow was compounded by the fact that he didn’t know that the vow could easily have been annulled. He thought about approaching the High Priest for assistance but decided that it was below his dignity to do so. The High Priest was punished for not taking the initiative and approaching Yiftach.

The person who seemed to have the most knowledge of the Torah was Yiftach’s daughter.  According to Midrash Tanchuma she intuitively challenged the validity of his vow with a series of logical arguments from the Torah. The Torah specifies that sacrifices are only from animals.  When Jacob vowed to tithe from everything that G-d blessed him with, that did not include the 12 sons that were born to him. Chana (mother of the prophet Samuel) vowed that if she had a son she would give him to G-d. That meant that he would study with the high priest Eli.

Yiftach’s ignorance won the day as seen by his reaction to his daughter’s arguments:

According to the Book of Judges, Yiftach’s daughter lived out her life in isolation and her fate was mourned as a national tragedy:

“The daughters of Israel would go every year, for four days in the year, and chant dirges for the daughter of Jephthah the Gileadite.”(Judges 11:40)

Yiftach was not the first Jewish king to violate the Torah. We see this pattern from the very beginning of Jewish kingship. However the text often shares with us the reason a king went astray. For example, we are told that King Saul spared the life of Agag, king of Amaleik, because the people took pity on Agag.  King Solomon’s heart was swayed by hundreds of his wives who were idol worshipers.

However, the Midrash makes an unequivocal statement which seems to differentiate Yiftach from other Jewish leaders:

“This is what you find with  Yiftach from Gilaad, because he wasn’t learned in the Torah, he lost his daughter. [his daughter lost out on living a normal life]”

What’s the real “Chok” in Bechukotai

Perhaps the incomprehensible, immutable, law of Bechukotai is this.  Despite the dire warning in the Parsha, many among the Jewish People are destined not to uphold the Torah. Therefore the angels’ protests were quite logical.

However, the story of Yiftach is perhaps a warning about our collective safety net. What prevents our total assimilation is our core of Jewish scholarship. However, what makes us most vulnerable is when Jewish leadership is ignorant of the Torah. As the Midrash says:

“If a person was righteous but is not involved in ([studying and living by] the Torah then he possesses nothing at all. “

Bottom line, the message of the Midrash might simply be: Jewish literacy should be a prerequisite for Jewish leadership.