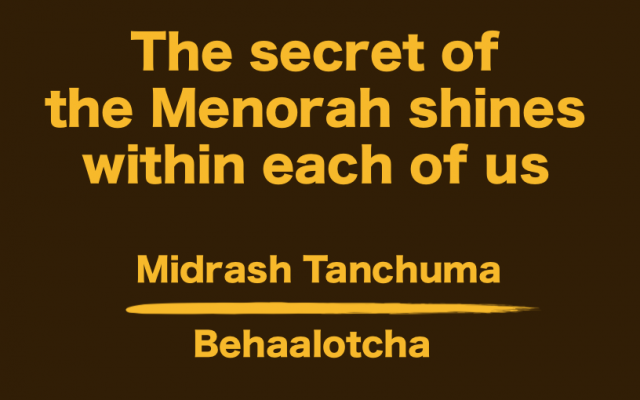 Midrash Tanchuma questions the central motif of our Parsha – the Menorah. We take for granted that it was an integral part of the Mishkan and the Temple of Jerusalem. However the Midrash seems to find this notion to be illogical:

“Would the Holy One Blessed Be He who is all light, need light from you?”

Our limited perception of light and darkness

The Midrash brings a mysterious analogy to strengthen the question:

“R. Hanina said: Part of your eyeball is dark and [the center] part is white. You cannot see out of the white part, only the dark part. So why would the Holy One Blessed Be He, who is all light, need light from you?”

The Midrash seems to portray an inherent limitation of human beings which makes our light insignificant compared to God’s light. We cannot even perceive light without darkness. Perhaps the fact that we can only see out of the darker portion of our eyes signifies why our vision is inferior. We can only appreciate God’s goodness (light) when we are living in [dark], difficult times. Therefore God, who is the source of light, certainly doesn’t need our finite light.

Nevertheless, God desires the light of the Menorah

The Midrash answers the question with another parable: A king tells his friend, who is a commoner, that the king plans to dine at the commoner’s home. The king’s advance team brought golden candelabras to set up at his friend’s house. The commoner is so ashamed by the contrast between the golden candelabras and his modest (Ikea) furnishings that he hides everything that he has prepared. When the King arrives he asks his friend why nothing is ready, to which his friend replies:

“My lord king, when I saw all this splendor that came with you, I felt ashamed and concealed everything that I had prepared for you, as it consisted of commoner’s utensils.”

“By your life, I am rejecting all my utensils which I have brought with me, and out of love for you I only wish to use yours. … as it says ‘And you shall make a Menorah of pure gold. (Exodus 25:ֵ8). When they had done so [completed the Menorah], the Divine Presence immediately arrived.”

The Menorah that we make therefore represents the fact that God feels at home with the modest furnishings in (the Mishkan) our house. The Midrash ends with God actually taking up dwelling in the Mishkan. Although when Moshe first arrives at the Mishkan he is so blinded by the light (of the Shechina) that he cannot enter. However when God invites him in,  Moshe is able to enter because it was only the light of the Menorah inside.

The Menorah represents our light, yet it too was made by God

According to Midrash Tanchuma God made the Menorah because Moshe could not figure out how to fashion it from one solid block of gold. Perhaps the message is that God is willing to make us ambassadors to spread light in this world. However, we should never lose sight of the fact that it’s God’s light we are spreading, not ours. Furthermore, we need God’s assistance to fulfill our mission. All of which is represented by the God telling Moshe to throw the raw gold in the fire and out came the finished Menorah.

When God dwells in the Mishkan, those who serve there must be upright

The very next topic in the Parsha after the Menorah is the elevated status of the Levites who were to work in the Mishkan. What emerges from the God-Man partnership in fashioning the Menorah is that in the house that God dwells in there can be no hypocrisy or falsehood. Perhaps that’s why the Levites were chosen to serve there. The Levites kept the faith in Egypt despite the rapid assimilation of the rest of the nation. According to Midrash Tanchuma the other tribes even stopped circumcising their children.

The first born were originally designated to serve in the Mishkan. However, once they worshiped the Golden Calf, it was the Levites who were then given that role. When Moshe needed help in destroying the Golden calf, and punishing those who engaged in idol worship, it was only the Levite tribe that heeded his call:

Being tested is a prerequisite for Jewish leadership

The Levites exhibited extreme loyalty to God and self sacrifice under trying conditions, According to the Midrash this is part of a process necessary for all Jewish leaders:

“God does not elevate anyone to leadership until that person is first  tested and examined.”

The first council of Elders was made up of those who took a beating from the Egyptian taskmasters meant for their fellow slaves. (In contrast to certain Jewish “Kapos” who beat the Jews in accordance with their nazi taskmasters ). All Jewish leaders were tested starting with Abraham. Isaac was tested and Jacob lived through many difficulties including the many years in the house of Laban, his confrontation with his brother Eisav, the sale of Joseph, the tragedy of Dina etc. Joseph too was tested with Potiphar and achieving reconciling with his brothers.

Boaz and David passed their tests by invoking an oath

The Midrash focusses on 2 particular tests which were critical for Jewish destiny. Tests in which it was hard to tell right from wrong. Both were fundamentally intertwined with the Messianic lineage. The first one was Boaz, the redeemer of Ruth and the great grandfather of King David. The Book of Ruth relates that Boaz was awoken in the middle of the night by a young, beautiful woman (Ruth) lying at his feet. The Midrash fills in the arguments of the (Yetzer Harah) the voice within Boaz that wanted to have relations with her at that moment. Since Boaz was the leading spiritual leader of his day, the voice spoke in an authoritative tone rooted in Jewish law:

“You are available [Boaz was a widower] and she is available. This is a perfect opportunity to have relations with her.”

To fortify his resolve, Boaz made a vow in God’s name not to touch her that night.

The great grandson of Boaz, King David, also grappled with a moral dilemma.  Although he was anointed king by the prophet Samuel, Saul was still king. Saul was relentlessly trying to kill David. When the opportunity arose that David could kill Saul he was conflicted. Once again the voice within Daveed was couched in Jewish Law:

“If you fell in his hands he would not pity you, he would kill you, Furthermore, according to Jewish Law, if someone is pursuing you to kill you, (Rodef) you are allowed to kill him first in self defense.”

David, like his great grandfather, took an oath with God’s name to fortify his resolve not to harm King Saul.

Even the Temple gates could not tolerate falsehood

As a further proof that the light that emanated from the Menorah had to be in a place free of falsehood, the Midrash tells the story of King Shlomo’s inauguration of the Temple of Jerusalem:

It seems that when he wanted to bring the tabernacle into the Temple the gates did not open for him. King Shlomo appealed to the gates with this verse from Psalms:

“Be lifted up you everlasting doors, so that the King of glory may enter.” (Psalms 24:7)

The gates realized that Shlomo was referring to God all along so they opened for him. God rewarded the gates. During the destruction of the Temple they sunk into the ground so they could not be carried off as spoils. (By the way, the Golden Menorah that God fashioned was also never looted. It, along with the ark, was hidden away. The Temple’s Menorah engraved on the famous Titus Arch in Rome was a different Menorah. One that may not have even been made from gold).

The Midrash tells us that the windows in the Temple of Jerusalem were narrow in the inside and wider on the outside. Because, unlike most windows that are trying to bring in light, these windows were designed to spread light out to the whole world. However, where does that leave us today. Midrash Tanchuma reveals where the Menorah resides:

“The Holy One, Blessed Be He, said to the Jewish People “If you light [the lamps] before Me, I will preserve your souls from everything evil.” Thus their souls are likened to a lamp, as stated, “A person’s soul is the lamp of the Lord.” (Proverbs 20:27)

Where is the Menorah today? It’s in each and every one of us. We can continue to spread God’s light by living in accordance with the Torah – with no shortage of role models in the Levites, the Elders, our Forefathers, Joseph, Boaz and King David.