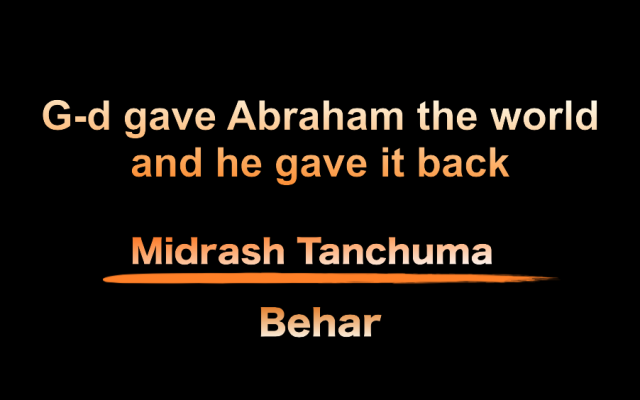 One of the major themes in Midrash Tanchuma is the prohibition against working the land during the (Shmita) Sabbatical year. The Midrash identifies the character flaws that would lead someone to this transgression by taking us back to the dawn of time.

Who were the first crooks in the world?

Sounds like a trivia question. According to Midrash Tanchuma there are 2 people in the book of Genesis who “ran after wealth” as the verse states in Proverbs:

An evil-eyed  person runs after wealth; He does not realize that loss will overtake it. (Proverbs 28:22)

The first was Cain. He wasn’t satisfied with inheriting half the world. He moved quickly to kill his brother so he could have it all. However, he ended up with nothing because he was punished with a nomadic existence.* He could never stay in one place long enough to enjoy his ill-gotten gains.

When reading the account in Genesis the aspect of greed is barely detectable, Cain kills Abel (Hevel) in a jealous rage because Cain’s sacrifice was rejected while Abel’s was accepted. Perhaps the Midrash is letting us know that there was a back story. Maybe the first murder in the world wasn’t simply a crime of passion.

Overpaying for the cave of the Patriarchs

The Midrash also puts Ephron the Hittite in the category of “running after wealth.” When Sarah died Abraham approached the Hittites to purchase an appropriate burial place. Abraham was first told that accepting money from such an important person was out of the question. It would be an honor to have Sarah buried on their land. When Abraham insisted  on purchasing the area, Ephron changed his tune and charged Abraham an exorbitant amount.

“My lord, do hear me! A piece of land worth four hundred shekels of silver—what is that between you and me? Go and bury your dead.” (Genesis 23:150)

Lack of faith. An abundance of greed

If we analyze these 2 incidents perhaps we can identify the character flaws that lead to the transgression of working the land on the Sabbatical year.

Cain lacked faith that G-d would provide for his sustenance, so he had to amass for himself a real estate portfolio covering the entire world. Although he was only one generation from creation he forgot that the world belongs to G-d. The Jewish People made that mistake as well. They forgot that the Land of Israel belongs to G-d and our sustenance is in the hands of G-d. When you live in an agrarian society, letting the land lie fallow is a real test of faith.

This is reminiscent of the moral dilemmas that faced new immigrants to America in the early 1900’s. Many were told “if you don’t come in to work on Saturday, don’t come on Monday.” It required a tremendous test of faith as to where your sustenance comes from.

Taking advantage of the vulnerable and the poor

After the death of his wife Sarah, Abraham chose a dignified place to bury her. Ephron’s greed led him to take advantage of Abraham’s emotional vulnerability. Ephron knew that he would pay anything to get it.

Greed was also the driving force behind those who violated the transgression of working their land and sold their produce on the Sabbatical year. What’s worse, they are stealing from the poor for whom the Torah gave the right to collect produce at no cost.

Midrash Tanchuma discusses G-d’s swift punishment for greed including this most unusual assertion:

“When you sell property to your neighbor, or buy from your neighbor, do not deceive.” (Leviticus 25:14)… The Holy One, Blessed Be He, said, “For I also sold the whole world to Abraham and did not deceive him. He then went back and sold it to Me,”

To understand this statement we must go back to Genesis which describes a world war between the  4 kings and the 5 kings. If you recall, the victors of that war captured, among other lands, the city of Sodom (of Sodom and Gomorrah infamy). Sodom is where Avraham’s nephew, Lot, settled and raised his family. When word got back to Abraham that his nephew and family were captured in the war, Abraham engaged in a successful military campaign and freed his nephew. In addition all the nations that lost the war were freed as well. Now you can understand why Abraham, as the ultimate victor, was considered the king of the world.

Abraham’s new status, according to the commentators, earned him more than just a title of king.

It seems that there was a recognition among world leaders that every nation has a guardian angel. Therefore any victory on earth reflected a victory against the losing nations’ guardian angels in heaven. Therefore, Abraham was also proclaimed the ruling god of the world.

According to Midrash Rabba, the people began building a stage from which to coronate Abraham.  He immediately put a stop to this by announcing that the world already has a king and a G-d. He introduced the radical idea to the ancient world that there was only one god who is both G-d and the King.

Now we can better understand the cryptic statement of the Midrash Tanchuma above. By allowing Abraham to be  coronated god and king of the world, G-d “sold the whole world to Abraham”  However, when Abraham refused this role (because everything he did was to promote the primacy of G-d) then Abraham, in effect, went back and sold it to Me (G-d),”

When did G-d have a chance to cheat Abraham, but didn’t

This particular phrase in the Midrash is more intriguing. One approach is based on the following concept in Jewish law:

Let’s say for example, a young Jewish woman keeps Kosher because she is living at home with her parents who are Kosher and her friends keep kosher.  On the other hand, a young man who is in the process of converting to Judaism goes to great lengths to keep Kosher. He lives in a small town and drives 40 miles to reach the nearest Kosher supermarket.

While the efforts of the young man show tremendous sincerity, the young woman gets a greater reward for keeping Kosher because she is  commanded to do so.

Let’s apply that principle to our forefather Abraham. According to the Midrash, Abraham observed Jewish practices. G-d never commanded him to, rather, he came upon then based on his highly developed, spiritual intuition. G-d could have assigned Abraham less merit for keeping precepts that he was never asked to do. However, for G-d, that would be ‘cheating’ this most amazing individual who single handedly challenged the status quo in a totally pagan world. Abraham gave meaning to the whole destiny and purpose of the world. Perhaps that is what the Midrash means when it said that G-d could have cheated Abraham but did not.

Going back to the fundamentals

The Midrash concludes with an inspiring interpretation of a verse from our Parsha. We are instructed to bail out our fellow Jew when dire circumstances force them to sell their property:

“When your brother is in dire straits and has to sell part of his ancestral land, his nearest relative, his redeemer shall come and redeem what his brother had to sell.” (Leviticus 25:25)

The Midrash has a completely different take on the verse. Who is the mysterious one to redeem the entire Jewish People from our darkest hour?

“Another interpretation of ‘then his nearest redeemer shall come’ This is the Holy One, Blessed Be He”

After all, the punishment for violating the Sabbatical year was exile. This is spelled out in our Parsha (Leviticus 26:34). G-d had the upper hand to punish as long as He wished, Instead, the Babylonian exile lasted only 70 years. In fact, the famous commentator, Rashi, provides an exact accounting of how the 70 year Babylonian exile corresponded to 70 Sabbatical years that we neglected. (Leviticus 26:35).

Perhaps, of all the iniquities committed during the First Temple Period, G-d wanted to focus our attention on the Sabbatical year. It represents two fundamental ideas- an expression of faith that G-d is truly the one who sustains us, and our obligation to sustain those who are less fortunate.

These are the Ideals that Cain, Ephram, and the Jews of the First Temple trampled on but G-d’s beloved Abraham, lived by.