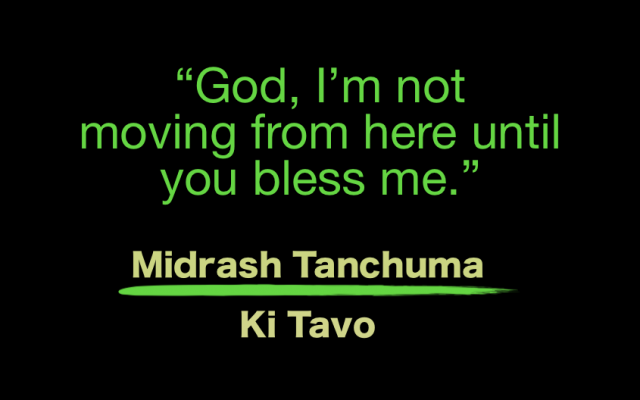 Pop quiz – Which religious ceremony allows you to insist that God grants you a prosperous new year? Which offers the instant gratification of a heavenly voice acknowledging, on the spot, that your demands have been met? This is exactly what happened when the Jewish farmer took his “Bikurim,” First Fruits, to the Temple. Midrash Tanchuma provides the surprising language used to address God:

“And not only that, but he would say,’I am not moving from here until You grant my needs today”’

In any case, he raises a theological issue with the farmer’s guaranteed positive outcome:  It looks like the farmer only brought his “First Fruits” in order to receive a blessing for the following year. This contradicts a spiritual tenet of Judaism that one should not worship God in order to get a reward

“Antigonus, a man of Socho, received [the oral tradition] from Shimon the Righteous. He used to say: ‘do not be like servants who serve the master in the expectation of receiving a reward,”’..(Pirkei Avot – Ethics of our Fathers  Chapter one, Statement 3)

Rav Itamari provides 3 answers to his question. First, Bikuirm – the First Fruits have an aspect of charity and one is allowed to test God in matters of charity. (See Midrash Tanchuma, Re’eh)  Furthermore, this instant response from God serves as a powerful manifestation of God’s presence in the world. His final answer reveals an insight into the way God runs the world. It seems that the only reason this Jewish farmer had a bountiful harvest to bring to Jerusalem in the first place, was because he was deserving of it. God knows that such a righteous individual is pre-qualified for a blessing of success for the coming year. In other words, although it seems like a guaranteed blessing for the upcoming year –  it is not.  God is beyond time. God knows what you did last year and what you are going to do next year.

Is there a modern day equivalent to a guaranteed blessing

Perhaps the closest scenario we have today is described by Rabbeinu Behaye (Bahya ben Joseph ibn Paquda, c. 1050–1120) in his classic work חובות הלבבות; Duties of the Hearts. Rabbeinu Behaye was a Rabbi and Jewish philosopher who is believed to have lived in Zaragoza, Spain.

He discusses what someone should make of the fact that he has been blessed with wealth. How does he know if it is a favorable sign from God. There is no heavenly voice to let you know.

Rabbeinu Behaye provides the following 3 clues to know that your wealth is a blessing from God and not a temporary test, or worse yet, a punishment in disguise:

1) “If you are more involved with fulfilling your duties to the Creator than you are occupied with your wealth. 2) If your wealth causes you to increase your service of God. 3) If you do not get emotionally attached to your blessing of abundant assets and you do not place your faith and trust in it. Rather, you spend your wealth in the fulfillment of your obligations to your Creator.” (Duties of the Heart, Sixth Treatise – on Submission)

Perhaps Rabbeinu Behaye is not only describing a righteous, wealthy Jew in the 21st century but also a Jew of the Temple period.  Someone so focused on using his wealth in the service of God that he can rightfully expect a purchase order signed by God for the coming year.