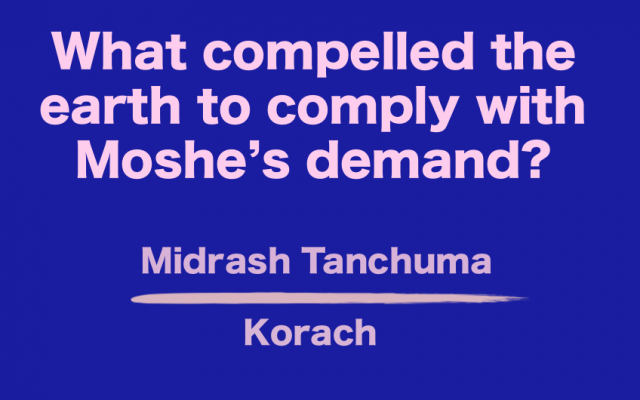 At the height of the showdown with Korach, Datan and Aviram, Moshe declares that if he is right then those rebelling will suffer a most unusual death which defies nature:

“…and the ground opens its mouth and swallows them up with all that belongs to them,..” (Numbers 16:30)

It seems that Moshe chose this dramatic punishment at a specific time and God was duty-bound to carry it out. Granted, Moshe knew that God would destroy them because God told Moshe to move everyone away from the rebels. However, what gave Moshe the confidence to declare the exact nature of his enemies’ demise without knowing if God will deliver?

How could Moshe be so sure that God was going to uphold Moshe’s honor when, at times, God does not seem to uphold His own honor.

What are God’s rules of engagement?

Although it seems unrelated to our Parsha, the Midrash brings the story of Titus – the notorious Roman general who destroyed the Second Temple. Few in the history of the world provoked God like Titus.  He had relations with a prostitute in the Holy of Holies – a part of the Temple that the High Priest could only enter once a year on Yom Kippur. Despite this audacious and public challenge to God’s authority, God did not defend His own honor. Which begs the question of how Moshe could be so confident that God was going to defend Moshe’s honor?

A commentary on Midrash Tanchuma (Be’er Hamamorim) makes a fascinating observation based on the following Midrash:

“Rebbe Huna and Rebbe Yirmiya in the name of Rebbe Shmuel the son of Rebbe Yitzchak said: We have found that God will overlook idolatry, adultery, and murder but not the abuse of Torah.” (Eichah Rabbah, Petichta 2 and Pesikta D’Rav Kahana 15)

It seems that there was more at stake regarding Korach’s confrontation with Moshe than with Titus’ confrontation with God. The despicable act of Titus could be put in the category of idolatry (although he engaged in sexual immorality and murder was soon to follow). He made himself seem more powerful than God.  Yet God did not see fit to strike Titus dead on the spot. When returning home Titus challenged God again. This time God chose to humiliate Titus by taking down the most powerful man in the world with one of the world’s smallest and most insignificant creatures – the gnat.  It flew into Titus’s nostrils, drove him crazy and grew large enough to eventually kill him.

Did the rebellion of Korach have more at stake?

Moshe was a scribe who added nothing of his own. The entire transmission of  the Torah is based on this fundamental truth.  Otherwise the Torah is man-made, not divine.

Korach was questioning whether Moshe was indeed a true prophet who faithfully transmitted God’s law. According to the Midrash,  Korach asked Moshe whether a talit that is all blue (made entirely of tekhelet) needs a blue string, or whether a room full of Torah scrolls needs a mezuzah. When Moshe answered in the affirmative, Korah accused Moshe of making up laws that  make no sense.  (Hear Rabbi Soloveitchik’s famous lecture: “The common sense rebellion against Judaism“)

“Moses received the Torah at Sinai and transmitted it to Joshua, Joshua to the Elders, and the Elders to the Prophets, and the Prophets to the Men of the Great Assembly……” (Pirkei Avot 1:1)

Moshe knew that God would follow Moshe’s instructions because Korach’s rebellion challenged the authenticity of the Torah – the blueprint of the world. According to the Midrash, when God created the world he looked into the Torah. So when someone challenged the Torah’s veracity, it should come as no surprise that the earth quaked.