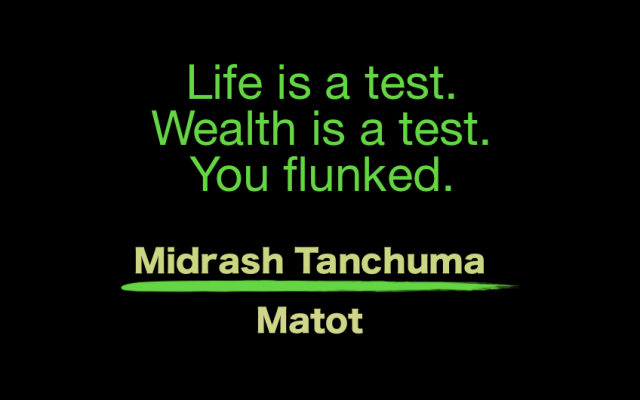 I would argue that the investment advice offered by Midrash Tanchuma is far more important than what  you might hear from a financial planner. Although principles like risk tolerance and a balanced portfolio have validity, it completely ignores the prime influence on wealth preservation.

In our Parsha, two and half tribes ask Moshe the unthinkable question –  I know this entire journey of over 40 years was to reach the Promised Land. I realize that major lapses in our faith is the reason we didn’t march straight into Israel and why the generation that left Egypt had to die out over 40 years in the desert. However, we just got rich from the war with Midyan, and now we have lots of livestock. This is really good land for grazing. Would you mind terribly if we settled right here instead of crossing over to the Promised Land?

How did the tribes of Reuven, Gad and half of Menashe amass such great wealth? The victorious war with Midyan? Wrong. When your portfolio is in livestock, how do you preserve and grow your principle? Choose lush pastures for grazing. Wrong again.

The Midrash spells it out in no uncertain terms.

The fundamental principle of wealth preservation

God made the 2.5 tribes rich to see what they would do. In their question to Moshe they outlined their plan to settle the area to the East of the Jordan River.  “We will build pens for our flocks and towns for our children.” (Numbers 32:16)

Notice how the livestock are listed first.

Moshe corrected their sense of priorities. First they must join the rest of the nation in the fight for the conquest of the Land of Israel. Then they can return and build homes for their children and lastly, pens for their cattle.

I worked with someone at a New York Advertising agency whose priorities seemed equally askew. He told me with great pride that when he arrived at his apartment building after work  he would first go to the garage  to check on his new car. Only afterwards did he go home and greet his wife and child.

In any case, let’s focus on the bottom line. The secret of wealth preservation is very difficult, yet very simple.

Know that it all comes from G-d.