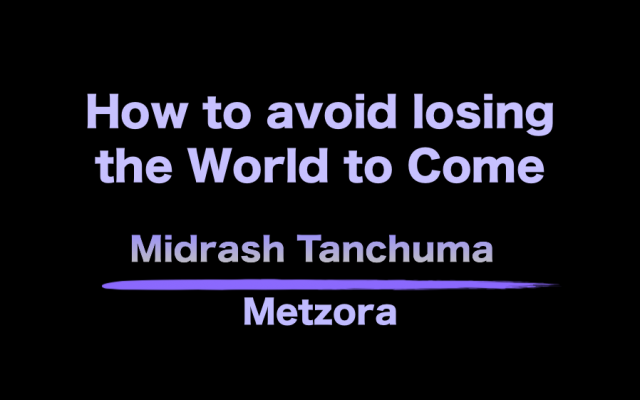 Midrash Tanchuma links (Tsoraas) the spiritual leprosy to a severe malady which still plagues us today – gossip and slander. Furthermore, the first line of Midrash Tanchuma spells out just how serious the consequences were for certain individuals who engaged in malicious speech:

“These are the laws of (Metzora) the person with spiritual leprosy,’ (Leviticus 14:2) our Rabbis (linked it to a discussion of) who lost their share in the world to come.”

Among them were 3 Jewish Kings; Jeroboam, Ahab, and Manasseh and 4 who were not kings Balaam, Doeg, Achitofel and Geichazi (Sanhedrin Mishna10 – 2) The Midrash says what they all had in common:

“On account of the words they spoke they descended to Gehenom (the Jewish conception of hell).”

What did these 4 ordinary men do to deserve this

We can understand why Kings could lose their share in the world to come. After all, their actions influence myriads of people. What about these 4 laymen?

Balaam is easy. We have a whole Parsha in the Torah in which G-d miraculously turned his curses against the Jewish People into blessings.

Doeg, an advisor to King Saul is also fairly straight forward. When King Saul was pursuing David, it was Doeg who told king Saul that David was given refuge in a Jewish city of priestly families. As a result, King Saul gave orders to slaughter every man, woman and child in that town. This is the same King Saul who took pity on King of Amalek – the sworn enemy of the Jewish People. As a result, the Midrash offers a chilling insight. The very same leaders who display misguided compassion, are capable of brutalizing the innocent.

“Rabbi Eliezer said he who shows compassion to the ruthless will end up acting ruthlessly to the compassionate.“

Desecrating the name of G-d

The next on the Talmud’s list of those who lost their share in the World to Come is Geichazi, the personal attendant to the prophet Elisha. Kings II tells the story of Naaman, the King of Aram, who was desperately trying to cure his leprosy. He was finally directed to the Prophet Elisha who instructed him to bathe in the Jordan River. The fact that healing could only come from a Jewish prophet and only in Israel, left a deep spiritual impact on the King. Especially because the prophet declined any form of compensation. Unfortunately, with one act of extreme greed,  Geichazi undermined the impact of the encounter between the king of Aram and the Prophet of Israel. As the king was on his way back to Aram, Geichazi caught up to him. He falsely claimed that the Prophet changed his mind and now wanted all the gifts that the king had initially offered. For his grievous deception Geichazi was himself cursed with leprosy, demonstrating  the connection the Midrash made between leprosy and malicious speech.

The deceitful advisor to King David

Last on the list is Achithofel. Neither the Midrash nor the Talmud clearly spelled out his crime. Midrash Tanchuma only mentions how he met his end:

“And Achitofel saw that his advice was not taken so he put his affairs in order and hung himself.” (Samuel II 17:23)

The simple answer for why Achitofel lost his place in the world to come is that he was a turncoat. He betrayed King David and joined the rebellion of  the king’s son, Avshalom, who attempted to depose his father. When King David fled the palace with his inner circle, Achitofel offered Avshalom deadly, accurate advice. Pursue King David immediately before he has a chance to regroup. Perhaps this is the crime of malevolent speech which sealed Achitofel’s fate.

Needless to say,  G-d had other plans and when Achitofel’s advice was ignored, he knew that the rebellion would be crushed and he would be put to death for treason. So he took his own life.

Talmud Makkot relates another incident involving Achitofel. However, this time it wasn’t what he said. It was what he withheld from saying.

“When David dug the drain pipes in preparation for building the Temple, the waters of the depths rose and sought to inundate the world. David said: ‘What is the Halakha (Jewish law)? Is it permitted to write G-d’s name on an earthenware shard and throw it into the depths, so that the water will subside and stand in its place?’” (Talmud Makot 11a)

King David knew that throwing a chard with G-d’s name on it would stop the rising water. However, there is a Biblical injunction against erasing G-d’s name which would inevitably happen when the chard of earthenware was cast in the water. King David asked his advisors for an immediate ruling based on Jewish law, but no one answered. King David then declared that anyone who knows the answer but does not speak up should be strangled.

After hearing the curse, Achitofel, who was well versed in Jewish Law, offered proof that it would be permissible to throw the chard in the water.  His advice worked. But his withholding of information as the future of the world hung in the balance, may have also caused Achitofel to lose his place in the World to Come.

The original poster child for malicious speech – the snake

We all know that the snake convinced Eve to eat from the Tree of Knowledge. Did this involve malicious speech or was the snake just a good (snake oil) salesperson?

Midrash Tanchuma reveals the depth of the snake’s iniquity and blasphemy:

“Every craftsman hates the competition. And when G-d sought to create His world, he ate from this tree (of Knowledge) in order to create (the world).”

We mentioned in last week’s Midrash that leprosy can be found on the walls of a house, spread to clothing and finally appear on the skin. Malicious speech was one of the sins that the Talmud lists as the reason for the destruction of the Temple – which is G-d’s house.

It would be reasonable to assume that the opposite is true as well. If we are careful with our speech, we can hasten the redemption and the rebuilding of G-d’s House.