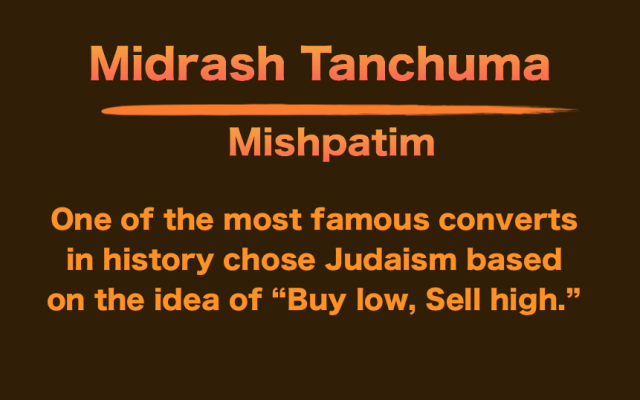 Midrash Tanchuma provides a glimpse into the huge spiritual divide between Roman culture and Jewish values as reflected in our illustrious “Mishpatim” – laws and statutes. The clash of values is illustrated by way of a conversation between  the Roman Emperor Hadrian and his nephew – our great sage, Onkelos.  It was Hadrian who suppressed the Bar Kokhba revolt in Judea. According to historians, many thousands of Jews died in that war and many more died of hunger and disease or were sold into slavery: The Midrash refers to Onkelos by his original name, Aquilas:

“Aquilas the convert, Hadrian’s nephew, desired to convert to Judaism, but he feared his uncle’s wrath. He told his uncle: “I want to engage in business.” … Hadrian responded: “Look for merchandise that is low in price because it is ignored and deal in it, for it will ultimately rise in price and you will profit from it.” Then Aquilas went to Israel and studied the Torah.”

Ultimately, Hadrian found out about his nephew’s conversion and confronted him. According to Midrash Tanchuma, Onkelos replied:

“You told me, ‘Whatever merchandise you buy that is low in value, and lying on the ground because it is ignored, do business in it, for it will ultimately rise in value.’ I have traveled among the nations and have found nothing so low and so cast down as Israel, and it is destined to rise.”

Onkelos, of course, went on to author the famous “Targum Onkelos,” – the  authoritative and universally accepted translation of the Torah into Aramaic. In fact, it is not just a translation, but a commentary as well.

The brutal Roman Empire saw little value in the enlightened ideas of the Torah. Although, in the writings of Rabbi Joseph Soloveitchik Z”TL, he points out that the Talmud records many conversations between the elite of Roman society and the Rabbis.  Rav Soloveitchik believed that if Judaism had been a religion that believed in proselytizing,  perhaps the Roman empire would have adopted Judaism. Which, in effect, would have meant that Europe would have become primarily Jewish.