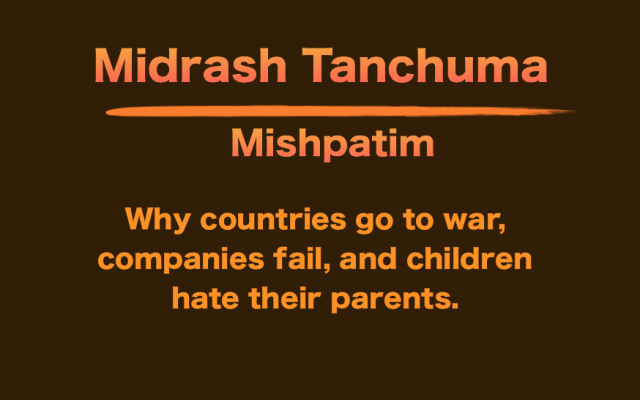 The laws and statutes in Mishpatim help a society govern itself with justice and morality. However, in the realm of human relations, the Midrash identifies one character trait that has the power to bring serenity, goodness and blessing to the world. It is something that everyone would agree on (but takes tremendous self control to put into practice) regardless of whether you believe in G-d or not.

I would venture to say that the scarcity of this character trait is why tyrannies can flourish and corporations fail.  Because, as we all know, it is rare for someone to tell a dictator, or even their boss, that their ideas are flawed. Midrash Tanchuma defines it this way:

“…As long as rebuke is accepted in the world, ease, goodness, and blessing will prevail as well, and evil will vanish from the world…”

The Midrash challenged us to reach a level of higher consciousness. Suspend our egos. Put our natural defenses aside.  Maintain an open mind and accept criticism and rebuke.

Ironically, the one social sphere where people do feel comfortable giving rebuke is in the home. However, if it is conveyed in a harsh manner to children, it can damage the parent-child relationship. Equally ironic is that in the one social sphere where giving and accepting criticism would be critical, it is never done. I am referring to the political arena where statesmanship forbids the truth from emerging.

Rabbi Berel Wein (noted author and lecturer) often remarks that with a little humility many of the world’s wars could have been avoided. If only every head of state had a wife that could tell him to “take out the garbage” this could have tempered run-away egos and forestalled ill-conceived decisions of kings, dictators, presidents and prime ministers.