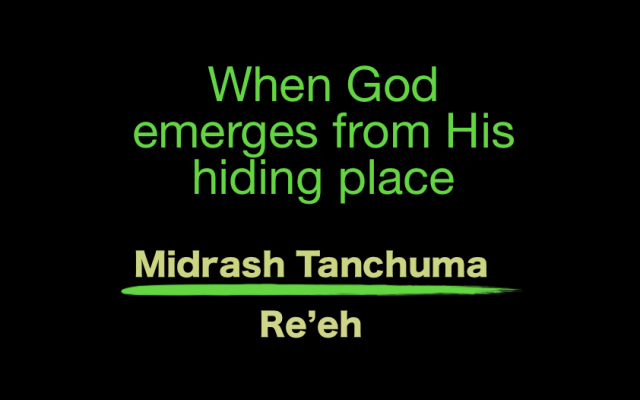 One of the themes of our parsha is the obligation to עַשֵּׂר תְעַשֵּׁר – give tithes from your produce. Midrash Tanchuma explores the unusual powers vested in this charitable act.

As it customary in Midrash Tanchuma, another verse is brought to bring more clarity: “Honor God from your wealth” (Proverbs 3:9)

Tithe from your talents

This verse provides for a creative extension to the notion of tithing from the produce that God blessed you with. The Midrash says that if God gifted you with a beautiful voice then show your gratitude by volunteering to lead the prayer services. If God gifted you with great looks, resist the immoral expectations and vanity that society may try to impose upon you.

The Midrash then warns: “Honor God with your wealth or else you will end up  honoring Him without your wealth.” The Midrash brings two stories to explain this idea.

One of the most enduring and endearing themes of Midrash Tanchuma is that God is pulling the strings in your life and in the destiny of the Jewish People. However, God constantly obscures His presence. In fact, one of the great tests in life is to find ‘God’s hiding places’. Having said that, we must explore why, in the next 2 stories, God made Himself so suspiciously easy to find.

The first story is about a man who amassed wealth in the form of a great many barrels of wine and oil, but failed to tithe. God planted the idea in his mind to smash his barrels one by one. When someone from his household tried to stop him, the man smashed that person over the head. The person (in an act of revenge) told the man to give him the stick and he would help. Indeed, with every blow he broke 2 barrels at a time instead of just one. The man who refused to tithe lost his wealth, seemingly, by his own doing.

This is followed by a parallel story of someone who tithed with great enthusiasm. God provided him with a counterintuitive idea which enabled him to thrive in a severe economic downturn. Instead of planting his entire field he decided to turn half of his field into a cistern for water. Sure enough there was a devastating drought and he was able to prosper because he sold his water for far more than he ever sold his crops.

It seems that tithing from your produce is a fundamental element in the relationship between God and Mankind. God is willing to go to great lengths to drive home the idea that our sustenance is only a tool to honor God. Thus God openly manipulated the circumstances of one man attaining wealth and another losing his wealth.

The closest you get in Judaism to guaranteed returns

And Rabbi Yoḥanan said: What is the meaning of that which is written: “A tithe shall you tithe [te’aser]” (Deuteronomy 14:22) This phrase can be interpreted homiletically: Tithe [asser] so that you will become wealthy [titasher], (Talmud Taanit 9a).  The Talmud relates that Rabbi Yohanan told this to the son of his study partner, Reish Lakish. When  the boy challenged the veracity of the teaching, Rabbi Yohanan told him that he can test it out. The boy asked if it was permissible to test God.  Rabbi Yohanan answered in the name of Rabbi Hoshaya that this is the only instance where you can test God.

You may be wondering if there is an equivalent way to  test God today and expect financial gains?

In the classic Code of Jewish Law – Shulchan Aruch (Yorah Deah: 247:4) it states that Charity prevents harsh edicts from Heaven, and in times of famine, charity  can save one from death. The “Rama” (an acronym of Rabbi Moshe Isserles) who offers the Ashkenazi rulings, says that giving charity makes you rich. Although one can usually not test God, you can when it comes to charity. Although he acknowledges that there are opinions which say that this only works with tithing from produce.

What’s so special about tithing and charity

As I mentioned at the outset, God is usually discreet about most tests in life,  otherwise they wouldn’t be a test. However, for some reason, the test of tithing from your produce is a wealth accumulation tool open to all. In our day, that translates into giving charity.

Of course, it’s not as easy as it sounds. It means that you have to overcome that very strong desire to think as successful people often do:

“And will you say to yourself, “It is based on my own power and the might of my own hand I have gained this wealth.” (Deuteronomy 8:17)

The Torah predicted that people will assume that their successful harvest or profitable venture is a sure sign of their business prowess and has nothing to do with God. This flies in the face of the notion that the Midrash introduced earlier:  “Honor God from your wealth”.  It seems the Torah goes all out to convey this fundamental message about life. None of your gifts are yours to keep for yourself. Not your looks, your brains, and certainly not your wealth.