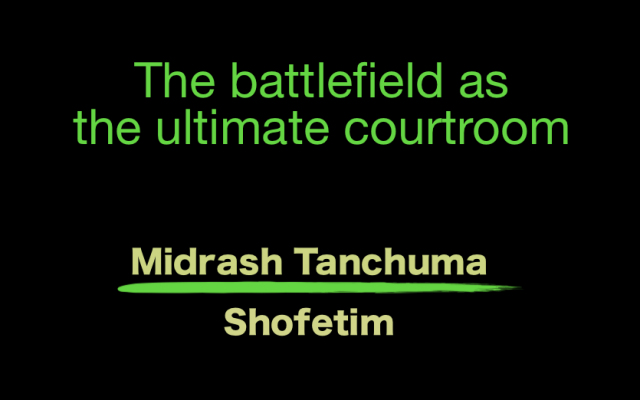 Midrash Tanchuma makes a short but startling statement about the difference between Jewish law and those of other nations:  “The descendants of Noah, apply the death penalty with [just] one witness, with [a court consisting of just] one judge and without being warned [of the consequences before the crime was committed].”

For those with a Jewish education, there seems to be nothing out of the ordinary about this statement. (In fact, many Jewish concepts you learn as a kid cannot  be appreciated unless one is somehow able to reexamine them through an adult consciousness and sensitivities). Yet if you compare Jewish law to  jurisprudence systems of today or of previous centuries, it seems quite radical. In cases where capital punishment is applicable, the Torah requires 2 witnesses, a warning, and the case is heard by a court of 23 judges. The Midrash also mentions an extensive cross examination of the witnesses. They are asked many basic questions as well as minute details to establish that they were actually at the scene of the crime.

The Code of Hammurabi

I don’t pretend to be an expert in the laws of ancient civilizations. However, to  give you a flavor of how different laws from ancient cultures are from Torah law, I present 2 laws from the famous Code of Hammurabi. (Yale Law School library site https://avalon.law.yale.edu/ancient/hamframe.asp)

“If any one is committing a robbery and is caught, then he shall be put to death.”

There is no mention of the number of witnesses, judges or the requirement of a warning. More importantly, in Judaism, robbery is not a capital offense.  The Code of Hammurabi also mentions something that sounds familiar. “If a man put out the eye of another man, his eye shall be put out.” Ironically, although almost identical words are found in the Torah, it was never taken literally. That’s because Jewish Law is made up of an oral tradition that was given along with the written law. In fact the Talmud provides a complex formula for how someone in this situation is compensated for their loss.

In fact, due to all the hurdles to implementing capital punishment, you may consider the Torah’s laws to be too lenient. However, as long as Rabbinic courts were functioning in ancient Israel, the Rabbis had the authority to incarcerate someone who “got away with murder” on a technicality but were deemed to be a danger to society. There are also stories in the Talmud which describe how God makes sure that justice is served.

The Midrash focuses on, what we may call the occult, to point out another contrast between the legal systems of Jews and non Jews. The Torah outlaws the practice of sorcery, necromancy, divination and even placing your face in  astrology.  A story is brought about Rabbi Yannai and Rabbi Yochanan who were sitting at the entrance of Tiberius. They heard an astrologer declare that 2 people who left town would not return alive because they would be bitten by a poisonous snake. The Rabbis waited to see what would happen. When the men returned alive the Rabbis confronted the astrologer. The Rabbis then asked the men what they did that day. They answered that there was nothing different about their routine. They read the “Shema” and prayed like everyday.  When the astrologer heard this he declared:

“The words of astrologers have no effect on you, because you are Jews.”

This story mirrors the episode in Genesis where Avraham questioned whether he and his wife would have a child. According to the Midrash, Avraham saw through astrology that they were not “destined” to have a child. However God took him above the heavens so he would understand that they are not subject to any “destiny” as defined by astrology

“God took him outside and said, ‘Look toward heaven and count the stars, if you are able to count them.’ And He added, ‘So shall your offspring be [great in multitude].” (Genesis 15:5)

The ultimate test of the unique Jewish fate –  the battlefield

If our destiny is controlled by God then we should not have to concern ourselves with events that usually shape mankind’s destiny – namely wars. In fact, God confirmed that our battles would be of a different nature at the Red Sea. The Egyptian army was fast closing in on us and God conveyed to us the following military plan:

So as a natural conclusion of what the Midrash says, a  Jew should have no fear in time of war. Then how do we explain why the Torah itself mandated that a special announcement was made to address the fears of the troops about to go into battle”

“If there is anyone afraid and disheartened, let them go home?” (Deuteronomy 20:8)

And how do we explain what happened in the days of the great prophetess Devora. She assured the general, Barak, that, in the name of God, they will win the war. Yet his response was that of fear:

Where the laws of heaven and earth merge

The Midrash provides the answer. There is divine unity to fighting for justice in the courtroom and winning on the battlefield:

“When you go out to war” (Deuteronomy 20:1): What is written [in the Torah] right before that? “And the judges shall make a thorough investigation” (Deuteronomy 19:18). [The juxtaposition of these words signify that] when the judges execute judgement, you [can] go out to war and you will be victorious.”

If we defeat graft, bribery and corruption in the courtroom, God will defeat our enemies on the battlefield. We are still left with the question: What do individuals have to fear about going to war?

Rabbi Akiva says that some people are simply terrified at the sight of a drawn sword.  However, Rabbi Yosei HaGelili says it’s a fear due to one’s moral failings:

[“When theTorah says] ’Those who are fearful and fainthearted’ [should leave the battlefield, it refers to]; those who are afraid because of the sins they committed” (Talmud Sotah 44A)

It seems that the battlefield is the ultimate courtroom.  As a community, it’s where God scrutinizes the morality of our judges. As individuals, it’s where we are scrutinized for our moral judgement.