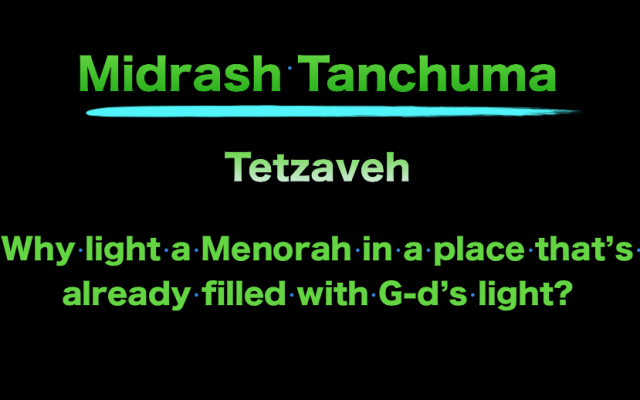 As usual, Midrash Tanchuma has no compunction asking questions that will make some people uncomfortable:

“You are a light unto the whole world, yet You asked us to light a fire that burns continuously! It is only by Your light that we are able to perceive any light at all. And yet You tell us to light a lamp?

What does lighting the Menorah in the Mishkan accomplish?

For many women, lighting Shabbat candles brings a sense of serenity and spirituality into their home. The Mishkan is G-d’s home.

When we light Chanukah candles we help dispel the darkness, recall and proclaim G-d’s miracles. The Mishkan was filled with G-d’s light, and was a place of miracles.

Why then would we light a Menorah in the Mishkan or the Bet Hamikdash – the very place where G-d’s light is emanating outward to the world. Where G-d’s presence is abundantly clear?

Can the Mitzvah of  circumcision shed light on this question

Although Parshat Tetzaveh covers topics related to the Mishkan, like the Menorah and the Priestly garments, the Midrash starts with a discussion of something totally unrelated – circumcision. Perhaps because the Midrash is presenting an example of something that is equally counterintuitive – to put it mildly:

“Rabbi Simeon the son of Yohai said: Observe that although nothing is more precious to a man than his own son, yet he circumcises him…Rabbi Hanina declared: And what’s more, he spends his money to celebrate the occasion…Not only that, but a man even borrows money and goes into debt (if need be) to celebrate on that day.”

What is the reason we exuberantly embrace the circumcision of our sons?  Midrash Tanchuma provides the answer.

“Rav Nachman the son of Shmuel said, it’s to fulfill the will of his creator.”

Rav Nachman does not specify who’s creator he is referring to. The child’s or the parents’. Perhaps parents have the sense that G-d was a partner in the miracle of childbirth so it’s only right that we fulfill G-d’s will. (As the Talmud says:“The Sages taught: There are three partners in the creation of a person: G-d, the mother, and the father.” Tractate Niddah: 31A)

In any case, by analyzing circumcision we have the first of several answers to our question about the Menorah. We light the Menorah because it is G-d’s will.

Do for Me what I did for you

The Midrash then suggests that we light the Menorah for G-d because G-d lit the way for us in the desert, as it says in Parshat Beshalach:

“And G-d went before them in a pillar of cloud by day, to guide them along the way, and in a pillar of fire by night, to give them light, that they might travel day and night.” (Exodus 13:21)

Of course, this just begs the question – it’s true that we needed G-d’s light in the desert, but G-d didn’t “need” our light in the Mishkan? Perhaps what the Midrash means is that G-d asked us to light a Menorah in order to give us a chance to feel like we are doing something for G-d.  To show our appreciation. Even though the act we are doing provides nothing that G-d actually needs.

In fact, the Midrash proves the point.

It’s an expression of G-d’s love for us

Apparently G-d is concerned for our feelings that we – as human beings – are always on the receiving end and never giving back. Furthermore, following G-d’s laws and precepts is something that G-d wants, so by lighting the Menorah we have indeed fulfilled G-d’s will.

We light for the sake of Aaron

The Midrash suggests that another reason for preparing pure olive oil and lighting the Menorah is because Aaron was saddened that his tribe did not take part in the inaugural sacrifices for the Mishkan. G-d was so happy to lift Aron’s spirits that G-d declared the light of the Menorah superior to the light of the sun and the moon:

“Rabbi Meir said: that G-d loves the candles that Aaron lights more than the (great) lights that G-d fixed in the heavens.”

Midrash Tanchuma offers yet another answer.

The whole premise of our question is incorrect

This answer comes in the form of a parable of a blind man led through the fog by a sighted man. When it got dark the sighted man asked the blind man to light a candle. The blind man asks “what’s the point of this?” The sighted man answers that, as we said before, “it will give you (the blind man) a feeling of giving back instead of constantly being on the receiving end.”

The obvious problem with the parable is, if the Jewish People are  represented in the parable by a blind man, so we can’t even see the light of the Menorah?

The commentaries propose an answer. They say that the light of G-d in the Mishkan was hidden away and forbidden for human beings to partake of. (This light will only be revealed in the World to Come). So our original question goes away. The reason we need a Menorah in the Mishkan is because there is no other accessible light.

Therefore the analogy of a blind man refers to the fact that human beings can’t see G-d’s light in this world. G-d did us a favor – out of G-d’s love for us – to allow us to produce pure olive oil and light the Menorah in the Mishkan. Now all the critical functions of the Mishkan  can be carried out.  G-d can communicate to the Jewish People through Moses. The Kohanim and Levites can perform their vital roles as G-d has requested.

Perhaps this was the role of the People all along

Perhaps this signifies that G-d’s plan was never for us to sit back and let G-d take care of revealing His light in the world. Rather, it was always the role of the Jewish People. Which is why the only light emanating from the Mishkan and the Temple in Jerusalem is from a man-made Menorah.

What and olive branch really signifies

Midrash Tanchuma takes the theme of lighting the Menorah with olive oil full circle. The Midrash recalls that Noah sent out the dove (an allusion to the Jewish People) to see if the flood waters had subsided and life can resume. The dove returned with an olive branch – symbolizing the pure olive oil that Jews would use to light the Menorah.

“Just like the dove brought light to the world, you (the Jewish people) are compared to a dove. So bring olive oil to light the candle (Menorah) before Me as it says: ‘and you are commanded to bring oil for yourselves (to fulfill your role)”

Meaning, to fulfill the unique mission of the Jewish People to bring light unto the world.

We brought darkness upon ourselves

The Midrash brings several stories to show the abundance of blessing that came to the Jewish People at the time when the Temple in Jerusalem was standing. However, living with all that light prevented us from imagining that there could ever be a darker period of Jewish history. As the midrash says:

We abandoned G-d’s precepts and no longer followed the path of justice and righteousness. We brought upon ourselves the destruction of the Temple.

The light of the Menorah was removed from the world.

According to the Midrash, G-d’s love for the Jewish people is expressed in the Song of Songs – so much so that Rabbi Akiva exclaimed that the Song of Songs is like the Holy of Holies. (The section of the Mishkan and the Bet Hamikdash where the High Priest only entered once a year on Yom Kippur).

One phrase in particular, describes our relationship in good times and bad:

“Behold you are so beautiful, my (soul) mate, how beautiful are your dove-like eyes.”(Song of Songs 1:15)

The Midrash sees“dove-like eyes” as an allusion to the times when the Jewish People adhered to the highest ruling judicial body in Israel (the Sanhedrin). Or, it refers to the nature of the dove to remain loyal to its mate as we were loyal to G-d. Another interpretation is that this phrase refers to a rather unusual characteristic of the dove. Unlike most animals, the dove willingly stretches out its neck when being slaughtered. So too, in our darkest hours, many Jews gave up their lives (rather than being forced to accept idolatry, Christianity or Islam – depending on the historical context).

We must rekindle the light

When we live our lives by the dignity and morality of the Torah then G-d dwells within us – providing a ready source of light to share with the world.