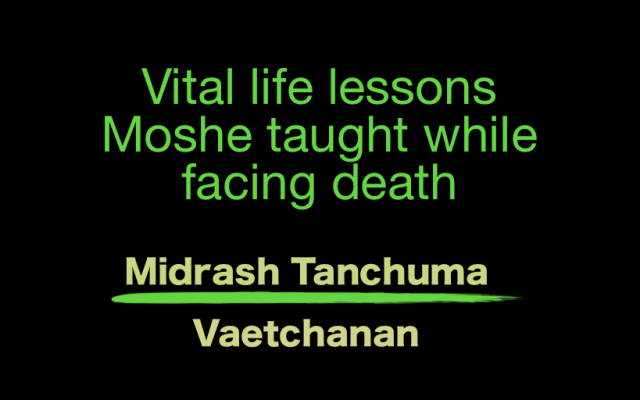 Imagine for a moment a conversation between God and a great world leader who was just informed that it was time to depart this world. Perhaps the leader would plead that their nation can’t function without them. They are loved by the masses who will be distraught and directionless without them. Or, they have so much more to accomplish and no one else can fill their shoes.

Moshe said none of this. In fact he pleaded with God to appoint a new leader.

However, Moshe did very much want to enter the land of Israel – or at least be buried there. After all, it was the goal of his travels and travails for the last 40 years. To that end, Moshe tried many different arguments. His first plea as presented by Midrash Tanchuma is certainly the hardest to fathom.

Moshe recounts the fate of great people who seemingly suffered the same end as notoriously wicked people. With the final example being the ten spies who died for maligning the Land of Israel. While Moshe, who praised the land, shares the same fate of the spies.  He too will die and never enter the land.

Moshe seems to level a terrible accusation at God – born from the pain of Job.

Considering that a fundamental of Judaism is reward and punishment for our deeds in this world and the next, this argument is simply incomprehensible. Yet God’s reaction to this severe accusation was simply:

Moshe’s next argument was that he was not someone whose downfall came from haughtiness and arrogance as noted in the beautiful words of King Solomon in Ecclesiastes:

“I have further observed under the sun that the race is not won by the swift, nor the battle by the valiant; Nor sustenance by the wise, Nor wealth by the intelligent, Nor winning favor by the learned. For everyone has their downfall.” Ecclesiastes (9:11)

According to Midrash Tanchuma, Moshe now takes a creative approach to beseech God.  He constructs his case based on Biblical verses. Moshe notes that God affectionately referred to him as His servant which means, of course, that God is his Master.

The Torah clearly states that a servant can choose to remain with his master forever and not go free:

“But if the servant declares, “I love my master, and my wife and children: I do not wish to go free. His master shall take him before the Judge. He shall be brought to the door or the doorpost, and his master shall pierce his ear with an awl; and he shall then remain his servant for life.” (Exodus 21:5-6)

Thus Moshe argues, I hereby declare that I love You (God), Your Torah and your children so I don’t wish to leave this world.

To counter Moshe’s claim Midrash Tanchuma picks up on Moshe’s slave analogy in the context of the finality of death:

Seeking to end the discussion, God reminds Moshe that once Adam sinned he brought death (mortality) to all of Mankind, including Abraham, Isaac and Jacob. When Moshe’s appeals were unsuccessful he attempted to solicit the intervention of Heaven and Earth, stars and planets, mountains and hills, the Great Sea, even an angel.  All to no avail.

In his final plea to God, Moshe asks if he could give up his leadership role and simply be one of Joshua’s students. God agrees. Since Moshe had already transferred his divine spirit, the Midrash shares a dramatic sequence in which Moshe attends a lecture by Yehoshua:  ,

“… Moshe did not know what Joshua was expounding. Afterwards the Jews… said to Moshe, “(Explain) the Torah we have just heard.” He said to them, “I do not know what to answer you.” … It was at that time that Moshe said, ‘Master of the universe, up to now I requested life, but now here is my soul given over to You.”’

God got Moshe to realize on his own that his primary role as a teacher was completed and he had little left to offer his people.

The tables are turned

Midrash Tanchuma provides the final conversation between Moshe and the Jewish People.  Perhaps it’s so moving because it sounds like the parting words every parent hopes to have the courage to say to their children before they leave this world. And the compassionate response every parent would want to receive in return:

“(Moshe was informed) the hour has arrived  to depart from the world.” He said to the nation of Israel, ‘ have caused you much grief over the Torah and over the commandments, but now forgive me.’ They said to him, ‘Our lord master, you are forgiven.’ Israel also arose before him and said to him, ‘Oh Moses our master, we have angered you a lot and increased the burden upon you. Forgive us.’ He said to them, ‘You are forgiven.’ (Moshe was informed) the moment has arrived to depart from the world. He said, ‘Blessed be the name of the One who lives and abides forever.’ He said to Israel, ‘If you please, when you enter the land, remember me and my bones, and you shall say, ‘Woe to the son of Amram, who ran before us like a horse but whose bones have fallen in the wilderness.’ (Moshe was informed) “the half moment has arrived. He took his two arms and placed them on his heart. Then he said to Israel, ‘See the final end of flesh and blood.’ They answered and said, ‘The hands which received the Torah from the mouth of the Almighty shall fall to the grave.’ At that moment his soul departed with a kiss (from the Holy One, Blessed Be He) …Now (the ones who) took care of his burial were neither Israel nor the angels but the Holy One, Blessed Be He, [Himself]…”

Perhaps this is story of what every human should be praying for. That God guides us in the course of life to finally come to an understanding of what really matters. What our mission was, what we achieved and how to reconcile with death.

It seems to me there’s another message to this story as well. Midrash Tanchuma is presenting the final scene of the extraordinarily close relationship between a man and God. It’s true that Moshe had the highest degree of prophecy that will ever be achieved. However, can we at least strive for a relationship with God in which our prayers are as deep, emotional, and real. Can we feel close enough to God that our prayers express our innermost hopes and dreams. And yes, our downfalls and defeats.