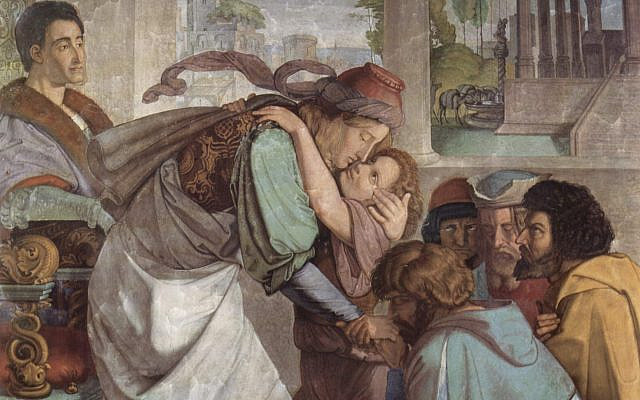 The Parsha opens with an epic confrontation between Judah and Joseph. It is portrayed in the Midrash far differently than the simple reading of the Parsha. Either way, the backstory is the same. Judah made an oath to his father that he personally guaranteed Benjamin’s safe return. Joseph knows full well the anguish that his father must be going through in allowing Benjamin to go down to Egypt. However, Joseph continues to test his brothers. He insists that since his royal goblet was found in Benjamin’s bag, Benjamin is the only one that should be enslaved. In a statement dripping with irony Joseph declares that the rest of the brothers can return “in peace to your father” (Genesis 44:17)

The lines are drawn in the sand.

Judah is the powerful leader of the brothers and Benjamin’s guarantor. Joseph is the Viceroy of Egypt who can dictate the fate of Benjamin.

Guarantors of our faith

While on the subject of guarantors, Midrash Tanchuma says that before the Torah was given, G-d asked the Jewish People for guarantors that they would keep the Torah. The Jewish People suggested our Forefathers. G-d declined. The Jews suggested their young children be the guarantors,  G-d accepted. What are the consequences of this deal  worked out over 3500 years ago? As the Midrash states:

“Therefore, whenever Israel neglects the Torah, the Holy One, Blessed Be He, exacts punishment from the guarantors, as is says: “You have forgotten the Torah; I will also forget your children.” (Hosea 4:6). What is meant by “I will also forget your children?” The Holy One, Blessed Be He, said: I will also suffer because of them, for I shall cause those (children) to be lost even though they declare in their daily prayer: “Blessed be the Lord, who is to be blessed forever and ever.”’

The Midrash seems to be describing the guarantors as pious children, similar to the children who became  guarantors when the entire nation stood on Mount Sinai to receive the Torah.  (A Midrash elsewhere describes how all the children at Mount Sinai, even those in utero, were asked if they accept the role of guarantors and they agreed wholeheartedly). For the continuity of Judaism, G-d wants all Jews throughout the ages to stay true to the Jewish faith. In the event that Jews forsake the Torah, G-d expresses regret for any spiritual or physical harm that will come to the children who are the guarantors.

What do the guarantors of the Torah have to do with Judah – the guarantor for Benjamin? We can certainly understand the extreme vigilance a parent would have if their actions could bring harm to their own children.  Perhaps the Midrash brings the  parent-child paradigm because it best captures the intensity Judah felt about his role as guarantor.  It also conveys just how far Judah will go to safeguard Benjamin.

Now we can better appreciate the extraordinary nature of the Judah-Joseph confrontation that Midrash Tanchuma is about to share.

The war of words starts with a threat from Judah and a biting retort from Joseph:

“I shall go out,” said Judah, “and dye the marketplaces of Egypt in blood. All your life,” replied Joseph,“ you have long been dying things in blood, like when you dyed your brother’s coat of many colors in blood and then told your father: Joseph is without doubt torn to pieces .”’ (Genesis 37:33)

If you think this exchange is intense, according to the Midrash, it gets even more personal. In the Torah it states that Judah started his appeal to Joseph with this flattering phrase:  כִּי כָמוֹךָ כְּפַרְעֹה  “You are the equal of Pharaoh” (Genesis 44:18). However, Midrash Tanchuma takes it to a very different place:

“You are the equal of Pharaoh” (Genesis 44:18). Your master, Pharaoh, loved women and wanted to possess them, and so you longed to have Benjamin as your servant, when you saw how handsome he was.”

Joseph hides behind a Mask

By pretending to use his magic goblet to “see” into Judah’s past, Joseph found a way to say anything he wanted without revealing his identity. Including his agenda of highlighting Judah’s hypocrisy of caring so much for Benjamin’s welfare while selling his own brother into slavery:

“I have discovered through this cup that you have older brothers,.. Judah replied: “What you see is correct, but I am compelled to speak because I am the guarantor for my brother. (Joseph responded) Why were you not a guarantor for the brother you sold to the Midyanites for twenty pieces of silver, and why did you cause anguish to your father by telling him Joseph was ‘torn to pieces?’ (Genesis 37;33) Joseph did nothing wrong, but this one (Benjamin) sinned in stealing the goblet…’”’

Unlike the way the Torah portrays Joseph as being unable to hold back his tears any longer, Midrash Tanchuma has the brothers trying to kill Joseph after he reveals his true identity. Joseph has to be saved by angels. He realizes that his brothers will tear Egypt apart.

But more importantly, Joseph realizes that he successfully dredged up their past and forced them to confront it.  He tested his brothers until the breaking point. Now Joseph is ready to move on. He genuinely wants to find a way to reconcile with his brothers.

A cry to bear your soul

What turned it all around and defused a confrontation that was about to turn violent? According to the Midrash harmony was achieved when Joseph cried from the depths of his soul.

“And he embraced Benjamin’s neck and wept, and Benjamin wept on his neck. And he kissed all his brothers and wept upon them; only then were his brothers able to talk to him.” (Genesis 45:14-15)

The heartfelt tears of Joseph communicated, like no words could, that all is forgiven. Joseph was not interested in being right. He realized, according to Midrash Tanchuma, that their shame was driving their emotions. So he must completely remove the shame. His tears were actually tears of joy. The confrontation is over. He bears no grudge. It’s time for a fresh start.

A scene to be repeated at the end of days

According to the Midrash, the stark emotions of this dramatic scene will play out again when G-d reveals himself to Mankind. G-d will cry for having put the Jewish People through such torment in Exile. Even though we brought it upon ourselves through our misdeeds. Just as the brothers brought their misery upon themselves.

Once again, the immense power of crying will alleviate our shame and bring about total reconciliation and love between G-d and the Jewish People.