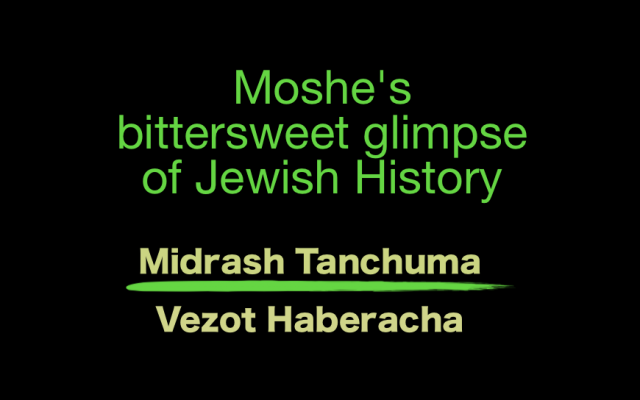 Midrash Tanchuma relates a cryptic reference to an event that would seem to be laced with extraordinary emotion. Shortly before his death, God showed Moshe all of Jewish history, from the beginning to the end of time.

What was it like to witness the glory and tragedy of Jewish history?

Midrash Tanchuma does not share any of Moshe’s emotions, it simply states:

Shimshon and Barak. Degrees of disappointment.

Why did the Midrash single out these 2 leaders by name? Perhaps it was particularly disappointing for Moshe to watch the downfall of Shimshon.  Someone who received a divine gift of superhuman strength to defend the Jewish People.  After all, Moshe was a former prince in Egypt who gave up a life of luxury and safety to heroically save a Jewish slave from the brutality of his Egyptian taskmaster. He single-handedly took on the Shepherds of Midyan who harassed the daughters of Yitro. Moshe is the great defender of the Jewish People who dared to tell God that if He does not forgive the Jewish people then “Erase me from your Book.” (Exodus 32:32)

What would Moshe have done with such a gift of strength? Would he have single handedly freed the Jews from bondage without the need for 10 plagues or the splitting of the sea. Perhaps Moshe was  partially consoled by the final act of bravery that Shimshon displayed before his death.

What did Moshe think of general Barak, commander of the Jewish Army. Moshe was honored with the title from God  – “My servant Moshe” (Numbers 12:7) He carried out God’s instructions with full faith and without hesitation. Moshe must have found Barak’s behavior to be disconcerting.  Even after a clear prophesy of victory over the powerful General Sisera and the Canaanite army, Barak refused to go to war unless the Prophetess Devora accompanied him.  Perhaps Moshe was uplifted by the bravery of Yael who killed Sisera in her tent at a great personal sacrifice.

The  Sifrei (Midrash Halacha on Devarim) mentions more events that Moshe was shown, such as the glorious first and second Temples and their subsequent destruction  Of course, the  Midrash could not have mentioned our long exile, the Purim and Hanukkah stories and the horrific and miraculous events of the 20th century.

But Moshe saw it al.

Moshe testified about whether God kept his promise

For what purpose did Moshe have to witness all this? The Midrash does seem to tell us that much.  Midrash Tanchuma mentions that Moshe could now testify to Avraham, Yitzchak and Yaakov that God kept his promise to them.

Meaning, God kept his promise to redeem us despite the fact that we broke our promise to keep the Torah – countless times.  Although we were not always faithful to God, God never revoked His marriage contract with us.

Let’s not forget that although it must have been emotionally draining to see our long, torturous exile, at least Moshe knew that there was a happy ending:

Yet another reason Moshe was shown all of Jewish history

Midrash Tanchuma says that Moshe was shown “every generation with its leaders.” Perhaps the Midrash is implying that God edited the movie of Jewish history so that Moshe could see the relationship between a generation and its leaders. It’s certainly easy to see in the Book of Kings how the Jewish faith completely deteriorated under the influence of a parade of kings described as “wicked in the eyes of God.” Of course, Moshe witnessed in his own lifetime how easily the people strayed from God, threatened insurrection and harbored a delusional memory of the wonderful life they left behind in Egypt.

Perhaps witnessing all of Jewish History was the ultimate consolation for Moshe.

Besides being the leader who implored, scolded and blessed his beloved people until his dying breath, he remains Moshe Rabbeinu – the  teacher of the Jewish People. The one who transmitted all the values that have kept us connected to God throughout the millennium.