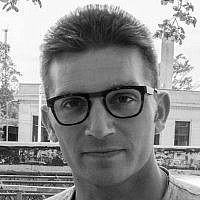 The Blogs
Philip Kafka
Apply for a Blog
Please note that the posts on The Blogs are contributed by third parties. The opinions, facts and any media content in them are presented solely by the authors, and neither The Times of Israel nor its partners assume any responsibility for them. Please contact us in case of abuse. In case of abuse,
Report this post.

I am an American raised Jew and recent Oleh. Many of my American friends have been asking my opinion regarding what happened in Israel during the past month. I am mostly uneducated in these matters, specifically, but based on what I know, here is my response. Life moves fast, so this topic via the lens of the recent happenings between Israel and Hamas might be irrelevant to the World, at large, but this theme, in general, about equating Might with being right or wrong is certainly timeless, and perpetually relevant. From the heart, gut, and head:

Israel is 73 years young, Jews are about 4,000 years old. Israel is the only Jewish country in the World. The Jewish people, over their entire tenure on this Earth, have faced and overcome oppression, expulsions, and most recently — in the 1940s — an attempted extermination that murdered 6,000,000 Jews – 63% of the, at that time, European Jewish population.

A good majority of the people who helped build Israel were survivors of the Holocaust.

Israel is the story that activists claim to fight in favor of: a perpetually oppressed minority group that will not give up, thrives, achieves, and builds in spite of oppression; and yet, the World doesn’t want to let the Jews be what they’ve fought so hard to become.

Throughout history, Jews have rarely (if ever) been cited as aggressors, conquerors, or warmongers; in fact, we’ve been the opposite — obediently leaving a country when we were asked to, obediently wearing stars to denote our belief system, obediently sequestering ourselves to the few trades European (and Early American) society would allow for us to work in, and even obediently getting onto trains that transported us to our death.

Today is different. We are no longer willing to be the weak and apologetic Jew that the world so badly wants us to be.

Thanks to Israel, Jews are actualized. We are strong and confident. We are the Jews we’ve always wanted to be. We are the Jews that the rest of the world claimed they wanted us to be when we were down and out, working to build a nation and to rebuild our confidence and population.

Our story of experiencing and working to overcome oppression, on one hand, is unique, on the other, it is not. Arabs across the Middle East, not just in Gaza, often find themselves oppressed by militant, totalitarian rule that prioritizes destruction over construction. Arab diaspora around the World isn’t the result of Israel’s existence or the Jews coming home to the Middle East, it’s because power-hungry totalitarian regimes, like Hamas, perpetually trade the prosperity and freedom of their people for absolute, militant rule. Israel is their convenient scapegoat.

Minority groups in America and all over the world have found, and still find, themselves oppressed.

And to all oppressed people, please be warned: when you finally overcome oppression, balance the scale of Justice, become strong, actualized, and the version of yourself you want to be, the world will hate you for it.

If you stand against Israel, you’re standing against the Palestinian people, and all oppressed people fighting for Justice and Liberation with ethics, steadfast perseverance, and strength.

If you stand against Israel you’re standing against what all Liberal people want — individuals, tribes, and nations galvanizing and earning freedom from any form of oppression.

Strength does not automatically equal oppression. ​Overcoming oppression does not equal being an oppressor. Any humanistic and ethical group of people who actualize their potential and rise above their circumstance should be celebrated.

If you stand against Israel, beware of the future, you’ll also be standing against Palestinians when they finally relieve themselves of oppressive militaristic rulers, Hamas, and build the nation they’ve always dreamed of.

If you stand against Israel, beware of the future, you’ll be standing against African Americans and other oppressed minority groups when they finally receive the justice they’ve been fighting for.

Whatever you are, stand by it, cherish it, and fight anyone, like hell, who tries to tell you that you can’t be the strongest, proudest version of the person your ancestors would have wanted you to be.

Do not equate Israel’s strength with the oppression of the Palestinian people. Might does not make right, but it also does not make wrong. Seek to indict who is wrong, instead of who might seem strong. Justice can only come after working to discover truth.

The Jews of Israel entered their country as demoralized refugees, have fought to build a vibrant, free, and thriving democracy in the Middle East.

When you support Israel, you actually support the Palestinian people and all people who are fighting for freedom every day; celebrate Israel, because it represents what we should want for any oppressed group of people.

Please stop kicking sand on a tiny little flame that burns bright in the Middle East, and think harder about how to actually liberate the innocent and good people of Palestine, victims of Hamas. Jews have always been the excuse, rise above that easy narrative and THINK.

I support Israel as an American Jew who is also now an Israeli citizen. I support the Palestinian people who want to live normal lives free from militaristic rulers who, like Hitler, blame their circumstance on the Jews. I support all people who are committed to fighting true oppression, and certainly celebrate those who have overcome it!

I mourn the loss of life in Gaza and Israel, and the stressful conditions people on both sides of the wall must endure.

Being Pro Israel is not being Anti Palestine, in fact, it’s exactly the opposite. Being Pro Israel means you root for the oppressed, and then celebrate and support their victory when — against all odds — it is claimed.