Right before Shabbos, I heard some very disturbing news.

At least two local synagogues sent letters out to its members regarding an article that appeared in a local news outlet.

Here is the actual documentation of one of the letters and the cover story: 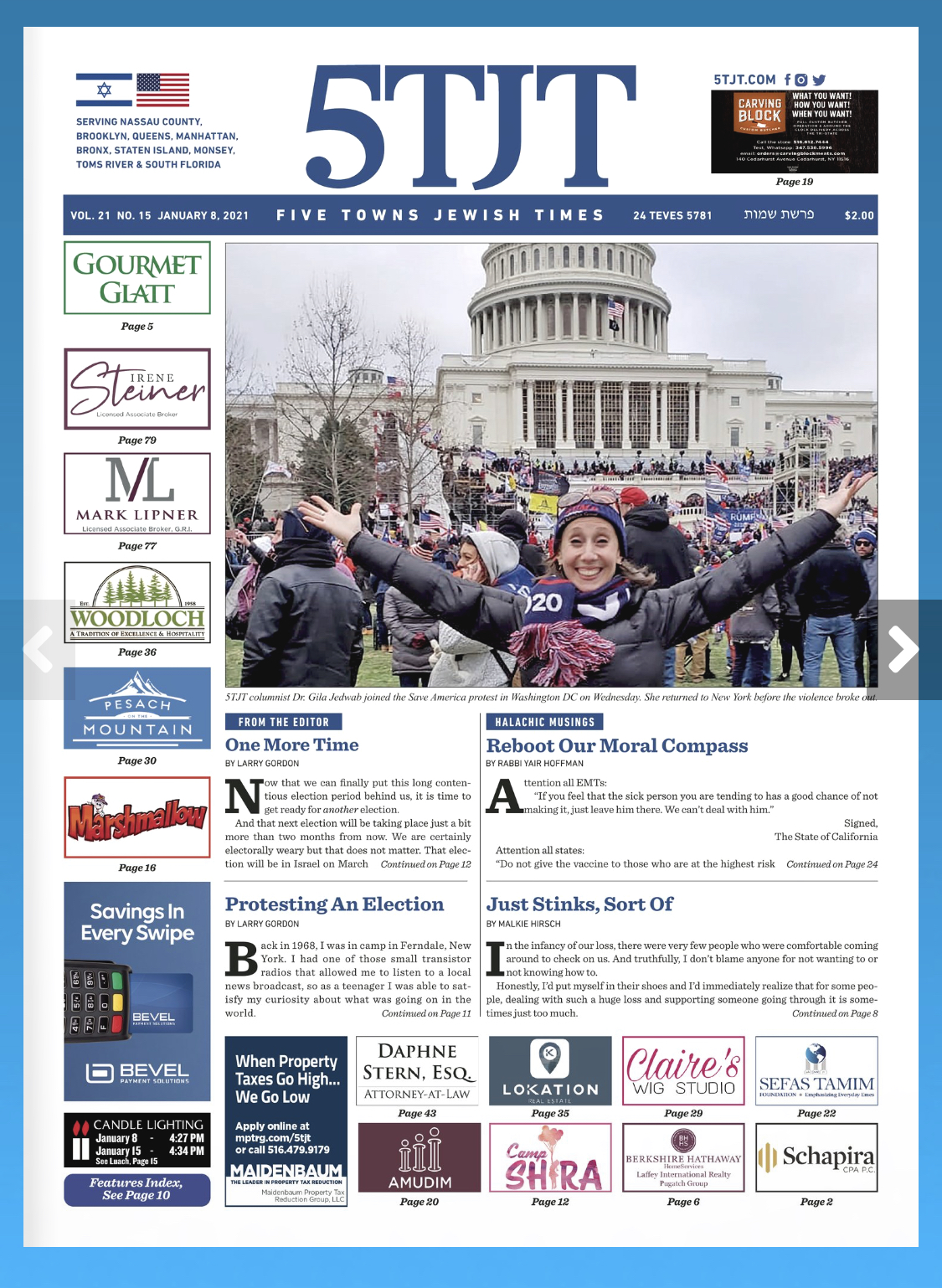 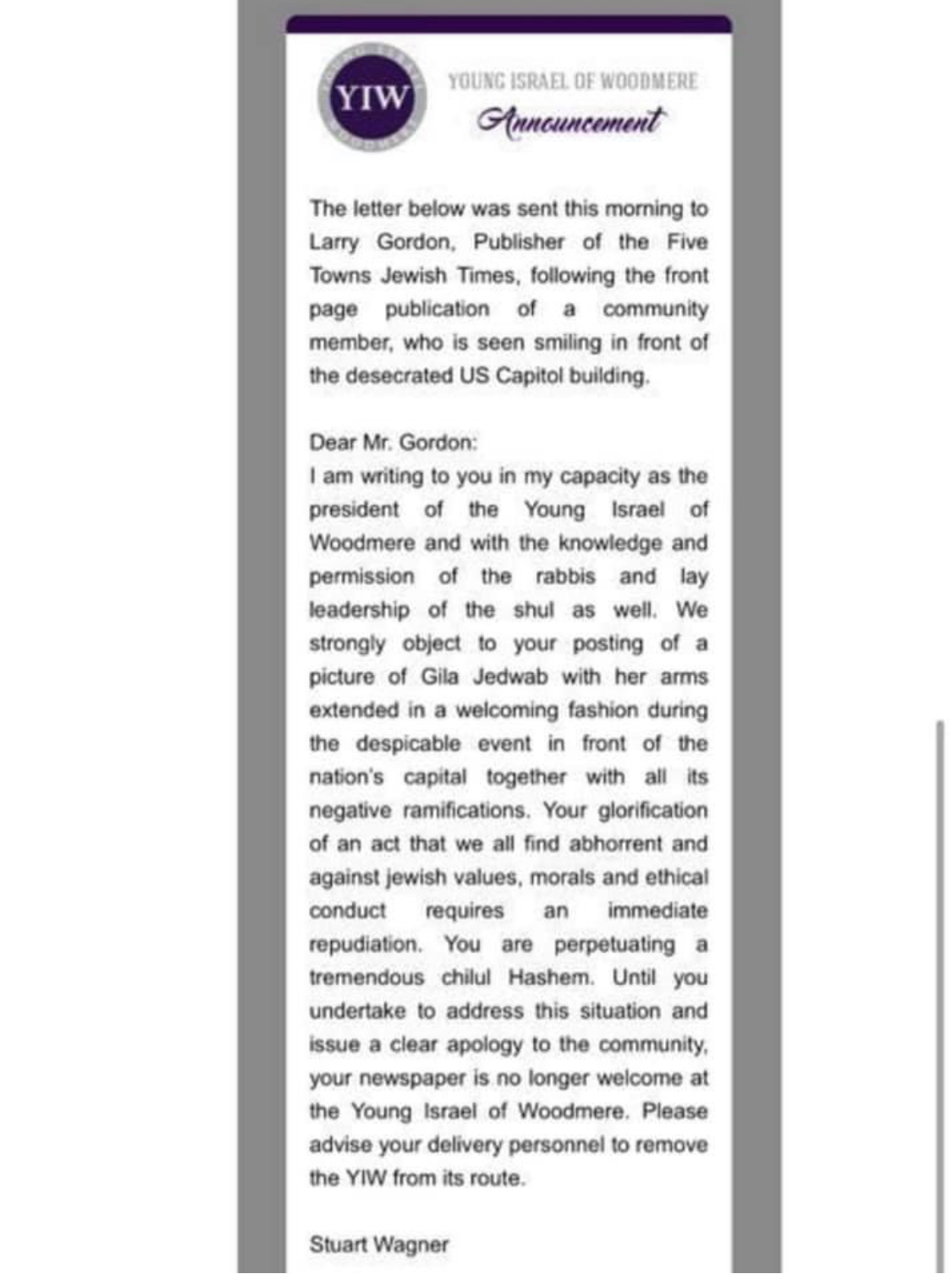 This controversy will never end well for any Jew, religious or not, politically active or not, located in New York, Florida or California.

A “Pandora’s Box” has been cranking open— and now it won’t close.

According to the woman at the center of the controversy, Dr. Gila Jebwab,

“We finally got inside and made our way onto the lawn. I asked heaven to help us get up close to Trump. I love seeing people on stage, almost close enough to touch.

Heaven came through. There was an open area of metal barrier at the far corner of the stage. We walked right up to it and held onto our piece. Later that night, when I saw aerial footage of the landmass of people behind us, I felt blessed.

At 9:00 AM, the program started. We heard from the cast of all-stars. Mo Brooks, Vernon Jones, Eric and Don Jr., Lara Trump, Kimberly Guilfoyle, Madison Cawthorne, Rudy Giuliani and others. They all spoke in the open air, no protection.

When the early speeches ended, rally music blasted over the speakers for what felt like eternity. We were anxious to see Trump, he was already a half hour late. We danced in place to keep warm. The cold wind made us brace and huddle. The muck beneath our feet seeped into the edges of our shoes. We were cold and returned to our hotel room.”

She did not know of the violence until she watched the news later, away from the Capitol.

Jebwab is someone I don’t always agree with. However, on the subject of peaceful protesting, she joins me in Jewish pride for speaking out and being heard.

It’s in the Jewish DNA. Name the issue— Soviet Jewry, fighting The Iran Nuclear Deal, standing up for Jonathan Pollard, the rights for safe working conditions and unions after the Triangle Fire Factory, standing together with the Civil Rights Leaders and even the Women’s March of January 2017, where Israel and BDS was called out by speakers, Jews were there in numbers.

If Jews try to silence Gila, or so many of my good friends who went to the rally on organized bus trips and were nowhere near the inside and destruction of the Capitol, will they try to silence our voices of joy during the Salute to Israel parade? Will Jews violate the laws of Loshon Hora, or worse, physical violence against one another?

Unfortunately, it has already been going on, just not publicized.

In 2017, I received the Aishes Chayil award from the National Council of Young Israel. Afterwards, I warned several rabbis and leaders that they were associating with people and organizations calling themselves “Trump Republicans” that had social media posts filled with anti-Israel, anti-Semitic attacks. None of them have any real ties to President Trump. They were coming from the Alt-right. They refused to listen, and blackmailed and threatened me. I have all the proof. They chose to stand with supporters of neo-Nazis, the Lyndon LaRouche PAC and radical Proud Boys supporters. On January 6th, I was not in Washington DC, but I was vindicated.

I can be a proud President Trump supporter for all his great accomplishments in the Middle East without standing with the Alt-Right. Instead of attacking innocent Jews, rabbis should distance themselves from any extreme group and share documentation instead of opinions from any side.

However, many Rabbis can not say they use the best judgement. How does it look when the Young Israel of Woodmere’s rabbis stand with anti-Semitic people associated with Black Lives Matter? How can rabbis distinguish between the swastika seen at the Women’s March of 2017 and the events of January 6th? Both are equally repulsive!

Imagine Jonathan Pollard not in Israel. Imagine Israel without Ethiopian Jews. Imagine America without unions in the workforce. Imagine the words “We Shall Overcome” without Jews walking hand-in-hand.

That is the strength of peaceful protesting.

If we silence one another, then Hitler won. I’m sorry to say this as a family member of living survivors.