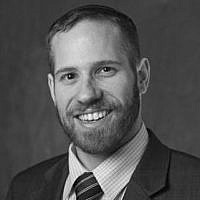 The Blogs
Moshe Krakowski
Apply for a Blog
Advertisement
Please note that the posts on The Blogs are contributed by third parties. The opinions, facts and any media content in them are presented solely by the authors, and neither The Times of Israel nor its partners assume any responsibility for them. Please contact us in case of abuse. In case of abuse,
Report this post.

By nearly any measure, American modern Orthodoxy is facing an identity crisis.

The recent Pew data indicate that fewer and fewer Jews who consider themselves Orthodox label themselves as modern Orthodox. Recent scholarship has suggested what most modern Orthodox leaders and educators already know firsthand: students in modern Orthodox schools are, at best, apathetic to their religious studies, and in many cases outwardly hostile to them. Though there is no systematic data that directly confirms this phenomenon, a robust body of anecdotal data suggests that modern Orthodox youth frequently choose to adopt either ultra-Orthodox or non-Orthodox identities, rather than synthesize the world of modernity with a world of religious service.

I have spent many years studying how culture, worldview, and identity affect education. It is no exaggeration to say that the most important aspects of schooling emerge not from analyses of competencies in math or science, Talmud or Jewish law, but in what has been termed “the hidden curriculum”—the aspects of school that implicitly shape basic communal norms and attitudes. The choices that schools—and in particular religious schools—make about the modes of study, the structure of the day, or the type of content taught, implicitly encode socio-religious norms and expectations within the school day. These norms reflect—and help create—specific patterns of engagement in society.

For better or worse, recent scholarship shows that modern Orthodox students come to school carrying with them foundational 21st century American assumptions about autonomy and individual choice. These assumptions make a religious curriculum that is premised on an appeal to authority seem distant, arbitrary, and most importantly, irritatingly burdensome. Students do not identify with the hero of modern Orthodox life, the brilliant religious scholar who synthesizes the best of high culture into a sophisticated Weltanschauung, nor do they identify with a less exalted synthesis of simple, yet meticulous, religious observance coupled with engagement in popular culture and society. For the most part, students reject the possibility of an externally imposed orienting framework, whether religious or secular; students wish to choose for themselves how to make meaning in the world.

This is a big problem for modern Orthodox religious life, and in my view, one that has no simple comprehensive solutions. Modern Orthodoxy’s identity crisis is truly a crisis of existential identity, which cuts across every aspect of life, and cannot be localized only in schools. However, my research (in both ultra-Orthodox and modern Orthodox schools) has shown that schools can and do have the capacity to shape students’ identities, and can substantially impact students’ relationships to religious study and practice.

The question is how.

In a recent academic article, I looked at the effect of one pedagogical and curricular approach that has been shown to impact identity in secular subjects, such as science and math: problem- or project-based learning.

PBL (as both are called) is a practical application of the theory of constructivism. This learning theory draws on abundant evidence demonstrating that all learning is active; not that people must be active in order to learn, but that as people learn, their minds actively connect new knowledge to pre-existing knowledge and build complex knowledge structures. PBL builds on this insight by embedding learning in real world contexts that present opportunities for numerous mental connections, so that knowledge doesn’t stay disconnected, but is deeply embedded in a context that gives it meaning. In these curricula, students are asked to solve problems or create projects prior to having learned anything relevant to the subject, and figuring out what they need to know in order to complete the task is itself a major part of the learning process. All the learning that takes place comes only to serve the task at hand.

This approach to learning has many other cognitive benefits, as well. Because students have taken ownership of the learning process, they are substantially invested in the outcome, and genuinely want to figure things out. This is important because a central feature of human nature is curiosity; if you can show someone a genuine problem to be solved, solving that problem produces a feeling of pleasure and accomplishment regardless of whether the material was interesting to him previously. Moreover, allowing students to struggle and fail before arriving at the right answers has been shown to produce deeper, longer lasting learning (think of the classic arrangement of learning with a study partner for a few hours before attending a text-based lecture, rather than after).

But from a modern Orthodox perspective even these substantial cognitive benefits may be outweighed by the socio-religious benefits of PBL. PBL curricula engage students in religious study in ways that build connections between religious texts and practices and students’ own interests and perspectives.

Religious study then becomes a part of students’ identities, as they autonomously engage in a range of secular and religious activities to pursue meaning in the world. As they engage in projects (such as one central example in the recent article, writing guidelines for their community on what is kosher at Starbucks), students reason in deeply personal, individual, and idiosyncratic ways, while remaining firmly rooted in the cultures of both modernity and religion. Their autonomy is never threatened, but their identity is nonetheless directed at the incorporation of religious study into everyday life—a traditional modern Orthodox goal.

For years, the modern Orthodox synthesis has been difficult for schools to implement in any practical way. Instead of religious obligation, students internalized a model of personal meaning making. PBL in Judaic subjects acknowledges this reality, but instead of fighting it, co-opts it; PBL gives students a way to incorporate a religious reality into a 21st century identity. When religious practices no longer feel oppressive and externally imposed, they have the ability to speak for themselves, and their intrinsic meaning becomes a part of students’ individual and personal meaning.

I do not mean to suggest that this is in any way a panacea, and the model has yet to be adopted and tested broadly, but it has potential. Considering the dearth of other solutions, and the pervasiveness of the problem, it might be time for schools to consider giving PBL a shot.

Dr. Moshe Krakowski is an Associate Professor and the Director of the Master’s Program at Yeshiva University’s Azrieli Graduate School of Jewish Education and Administration.

About the Author
Dr. Moshe Krakowski is an Associate Professor and the Director of the Master’s Program at Yeshiva University’s Azrieli Graduate School of Jewish Education and Administration.
Related Topics
Related Posts
Moshe Krakowski
Comments