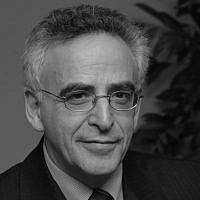 The Blogs
Michael Leigh
Apply for a Blog
Advertisement
Please note that the posts on The Blogs are contributed by third parties. The opinions, facts and any media content in them are presented solely by the authors, and neither The Times of Israel nor its partners assume any responsibility for them. Please contact us in case of abuse. In case of abuse,
Report this post.

Israel’s formidable offshore gas discoveries should be mobilizing the country’s best and brightest to find optimal ways to develop this new bounty. Instead, energy policy is polarizing politics and society, fueling conspiracy theories and leaving the public suspicious and bemused. Companies which have invested billions of dollars in exploration and production are wondering whether political, regulatory and commercial conditions will permit them to bring the large Leviathan gas field on stream.

To be sure, discussion, debate, and irreverent journalism make Israel a thriving democracy. Opposition parties are there to question and indeed to oppose, when they deem this in the public interest. But the current national conversation about fairness and competition in the energy business is being conducted in a fog of half knowledge and distrust. Changes in the regulatory regime have not been explained clearly to the Knesset, the press and public opinion, fostering distrust.

The latest deal between the government and the companies was due to be brought to the Knesset this week. This has now been postponed until after the summer recess, to allow fine tuning and to gather the necessary political support. The deal is designed to ensure fair competition and can be defended as a reasonable compromise. But instead of presenting it on its own merits, the authorities are evoking “geopolitical urgency”, with the implication that national security is at stake.

This comes down to the risk of “cheap” Iranian exports flooding gas markets, after the recent nuclear deal, and to arguments about regional stability. Yet Iranian gas is needed for consumption by Iranians themselves. Seven to ten years of development are required before significant additional quantities of Iranian gas could be exported. Until now, Iranian gas exports to Turkey, recently subject to terrorist attack, have been anything but cheap.

“Geopolitical urgency” is also cited to push for Israeli gas exports to Egypt and Jordan, strengthening political ties and regional stability. Yet multi-billion dollar investments are needed before large additional volumes of gas could be pumped from deep below the seabed and transported to Egypt. Domestic gas will increasingly provide for Egypt’s own requirements, removing the need for imports, and the future of the country’s two idle Liquefied Natural Gas plants, which could be used for re-exports, is uncertain. They may be sold off and the intentions of their future owners remain to be seen. Piping gas to Jordan is simpler and less costly. But the Tamar field needs to be expanded, pushing first gas to Jordan several years into the future.

Israeli opposition parties, the press, and the wider public are, understandably, skeptical of geopolitical arguments. “Geopolitical urgency” could more easily be understood if it meant developing a second field for domestic consumption, building “redundancy” into the system. This would end Israel’s dependence on a single pipeline from Tamar to bring onshore gas that now generates more than half the country’s electricity. Despite stringent security measures, the vulnerability of this single source is obvious.

The authorities could put a stop to unfounded suspicions of cosy deals with the companies by more straight talk. Ministers should explain that natural gas provides Israel with a stable and relatively clean source of energy at reasonable prices. The postponed “framework” agreement reinforces competition to the extent possible in a small country which is shunned by oil and gas majors. There are unlikely to be new entrants to the market that possess the necessary capital, experience and deep-water know-how.

Bankability rather than geopolitics will convince energy companies and lenders to finance field development and pipelines. Large-scale projects have payback periods of ten, fifteen or twenty years and will only be financed if they are commercially viable. Above all a stable and predictable regulatory environment is needed to establish the confidence necessary for investments on this scale.

Cyprus may at last be close to reaching a comprehensive settlement of the division of the island. This would open up additional prospects for energy cooperation, possibly one day including Turkey. With this in mind, Israel and Cyprus should end years of wrangling over Israel’s tiny ownership share in Cyprus’s Aphrodite field. They could easily split the difference. If the Prime Minister had returned from Nicosia this week with the long delayed “unitization” agreement in his pocket, the industry would have breathed a small sigh of relief.

Instead of real if modest progress on issues such as this, ministers continue to talk up highly improbable projects, such as a 1,200 kilometer pipeline from the Eastern Mediterranean to Europe, via Cyprus and Crete. This may briefly create an aura of statesmanlike vision but will further feed public skepticism when revealed to be lacking in technical, financial and economic viability. Here too the case for straight talk about complex energy issues is overwhelming.

About the Author
Sir Michael Leigh, senior fellow at the German Marshall Fund of the United States, has just concluded a visit to Israel and Cyprus.
Related Topics
Related Posts
Comments