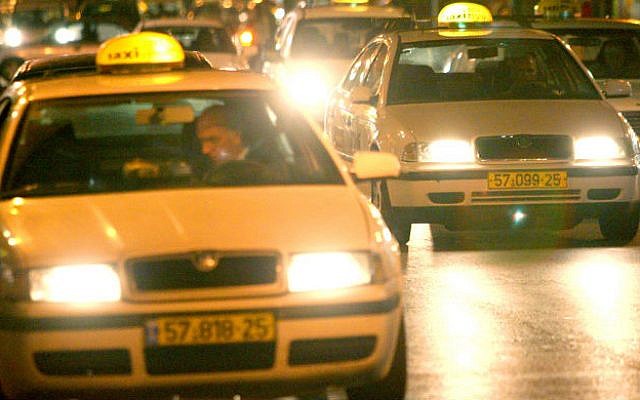 Illustrative photo of taxis in Jerusalem. (Photo by Moshe Shai/Flash90)

Much has been written about the way in which physicians used to conduct their practices, whether hospital or community-based. Until a short time ago, patients didn’t even dare challenge a physician’s opinion, based on material that the patients may have independently read. Over time, the quality of information available for non-physicians, on the Internet, has improved significantly. Websites like “PatientsLikeMe” offer a marvelous sharing environment where critical information about diseases and treatments is discussed openly and freely, and may include data that physicians are totally unaware of. It seems that the time has come for doctors to start adapting to the new reality of not being the sole owners of medical information.

I recently dealt with the healthcare needs of two friends. Despite my being a physician, and my two friends being well-versed in the medical field, we all found ourselves lacking a means of finding a top level specialist for each’s specific needs. When I say “top level”, I am referring both to the technical skill and the personality of the physician. Ideally, somewhere, there should be a website/app for scoring quality of care by individual physicians. And it would be the patients who would be doing the scoring.

Doctors have resisted such a scoring system since the idea was first raised. Unlike scoring systems by clients in almost every other area of life, doctors felt that patients were not “qualified” to measure the success and value of a physician. The logic is conveniently circular. Doctors still insist that medicine is too ethereal to be quantitatively measured and compared between physician and physician, and hospital to hospital. Despite the dramatic daily growth in evidence-based medicine, and the definite ability to score individual and institutional adherence to established protocols, physicians still feel that medicine is an art beyond numerical constraints. According to this thought process, one cannot legitimately compare medical care between providers, and thus data about quality of care cannot be collected. And without data, you can’t score.

Ownership of medical information is no longer the sole domain of physicians. And patients, via the Internet/Twitter/Facebook/etc. have a free hand to discuss anything and anyone they wish. Of late, the alternative-to-taxi service called Uber, has led to a mind shift in the public’s attitude towards all types of services. The Uberization of client services has led to a shift in social norms such that the average person now feels that firstly, they should be scoring the services they receive and secondly, these scores should be readily shared.

Some physicians and healthcare institutions have recognized the opportunity in an Uber style medical service. Patients in a given geographical location can put out a request for medical care and quickly receive a response from a group of physicians who are available at various times. So, if a physician happens to be available at 10 o’clock at night and is also close enough to the patient, there is an opportunity here for the patients to receive care and for the physician to be remunerated for that care. Patients who use such a service provide comments and a scoring at the end of the encounter. With a sufficient frequency of visits, certain physicians will very quickly be recognized as being pleasant, professional and worth the cost of their care. At the moment, this is still a relatively limited phenomenon. But anyone who underestimates the eventual effect of this process, lacks vision.

Doctors would be far better represented  if they embraced such systems  and even created scoring tools that followed standardized templates. Such templates would include standard questions such as “was the doctor attentive”, “did the doctor fully explain the treatment in an understandable way” and “do you feel that you got your money’s worth”. If doctors lead the way to quantification of the care they provide, the data collected will be far more useful. Random comments by patients are far harder to analyze than the check marks on a standardized questionnaire.

I personally truly have no doubt that the occasional unjustified negative reviews will be statistically washed away, if in fact the physician merits a positive score. I would suggest that many physicians are in fact concerned that negative reviews will not be rare. The beauty of Uber Is that if the rating system was totally inaccurate, the business would ultimately fail. If a physician version of Uber ends up flagging the better doctors as being poor, and the weaker doctors as being the lead specialists, market forces [i.e. the patients] would quickly abandon the entire system. So, once again, an Uber-like approach to scoring all quality of care will work.

We can not move forward with improving healthcare if we do not have a quantifiable score for performance, for physicians individually and hospitals as a whole. Of course, within healthcare institutions, each department could receive its own score. It could be that the imaging department of one hospital is rated very highly whereas the outpatient orthopedic clinic of the same hospital is rated poorly. I find it hard to believe that the CEO of such a hospital would not welcome such feedback, which could be quickly translated into positive action, and more importantly for the CEO, increase patient flow and income.

Doctors will have to accept this very simple fact – that in this new reality, they are effectively taxi drivers. Doctors are service providers no different than the people who bring your sushi to your office. It’ll soon be standard to rate physician quality in hard numbers. Comparisons between physicians and medical services will be very public, and patient flow will respond accordingly. I suspect also that with such a scoring system in place, there will suddenly be a dramatic cross-world rise in quality of care.

Every year, hundreds of thousands of people, just in the US, suffer or even die from preventable errors in hospitals. I strongly suspect that these numbers would plummet if patients could compare error rates from one hospital to another. Invariably, when a person or service is scored, and that scoring determines success, positive change happens. And whether it is “fair” or not to the doctors, this will become the new reality.