First published in the South African Jewish Report on November 11, 2021, as “Lessons we can learn from our Kurdish brethren”

Approximately 90% of South African Jews are of Lithuanian heritage.

I have just returned from an educational tour of Northern Iraq (Kurdistan) where I studied the parallels of genocides and persecution.

As Jews, we are familiar with genocide. Most of us South Africans were raised in small families, our extended families slaughtered in Lithuania. Our grandparents generally shielded us from the horrors of their youth. Today, we visit Lithuania on “murdered Jew tourism” to visit the blood soaked lands and sterile monuments in the land of our annihilation. We Jews have suffered repeated efforts to genocide us, physically and culturally.

In Northern Iraq, the land is similarly soaked in blood. Kurds and Yazidis have been wantonly slaughtered, repeatedly, consistently and virtually without external assistance. The parallels in human rights crimes are shocking.

Kurds are a distinct ethnicity in Iraq with their own autonomous region. Their historic land, collectively “Kurdistan”, exists in northern Iraq, southern Turkey, eastern Iran, and western Syria. However, only the region in northern Iraq is autonomous. They have been the subject of endless genocide attempts and forced Arabization. The most recent genocide effort against the Kurdish people was by Saddam Hussain’s Baathist regime in 1991. Kurds are Muslim, possibly of Jewish heritage. Ties between Kurds and Jews run deep and profound. There is no place in the world that I have felt such love and respect for Jews and for Israel as among Iraqi Kurds. There is nowhere in the world I have felt as safe and protected. 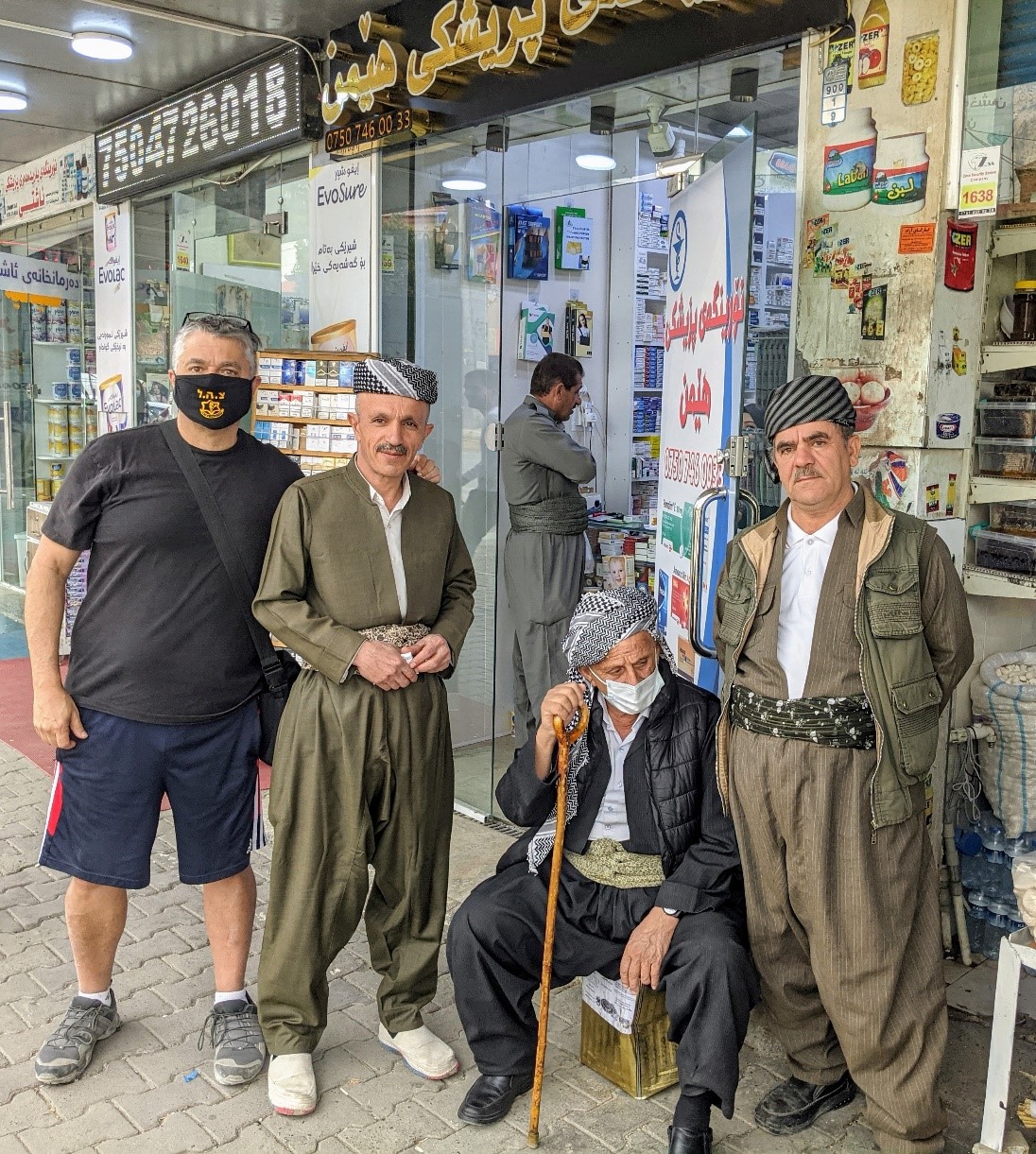 Wearing the best Covid facemask in the whole of Iraq (Tzahal)

Kurds are the world’s largest minority without a homeland of their own. Palestinian leader Abbas vigorously opposes Kurdish independence, openly confirming that this is in order to avoid Israel having another firm ally in the Middle East. The Palestinian cause sucks so much attention in the world, it appears there is little capacity remaining for the world to see or hear the needs of the Kurdish people. Meeting Kurds in person and understanding their unique culture and needs was certainly informative and life altering.

Also living in this region are the Yazidi people. Theirs is not a religion I was able to comprehend, yet their experiences are intimately familiar. There have been seventy three distinct efforts to genocide the Yazidi people. Only 400,000 Yazidis survive.

The most profoundly moving experience of my trip was meeting Lisa Miara, an Israeli Jew living in Iraq, rescuing Yazidi children from ISIS, and trying to heal their physical and psychological wounds. Yazidi men between the ages of 8-80 were murdered. Yazidi women and girls were abducted, sold into sexual slavery, physical slavery; brainwashed into becoming Islamist terrorists to be turned against their own people, and used for organ harvesting. ISIS sells Yazidi organs on the international black market. In each of the children’s tortured faces, I could see the suffering of our own European Jews. Lisa, a giant among humanity, is doing all she can to help these tortured surviving children, while international NGOs are absent.

Unlike us Jews, surviving Kurds have long memories and until full truth has been told and sincere apologies made, they will not allow Baathists to manipulate their tragedy to reform their own image. To prevent the propagandization of their slaughter, they will not even allow Baathists into their hallowed burial grounds. Jews should learn this lesson. 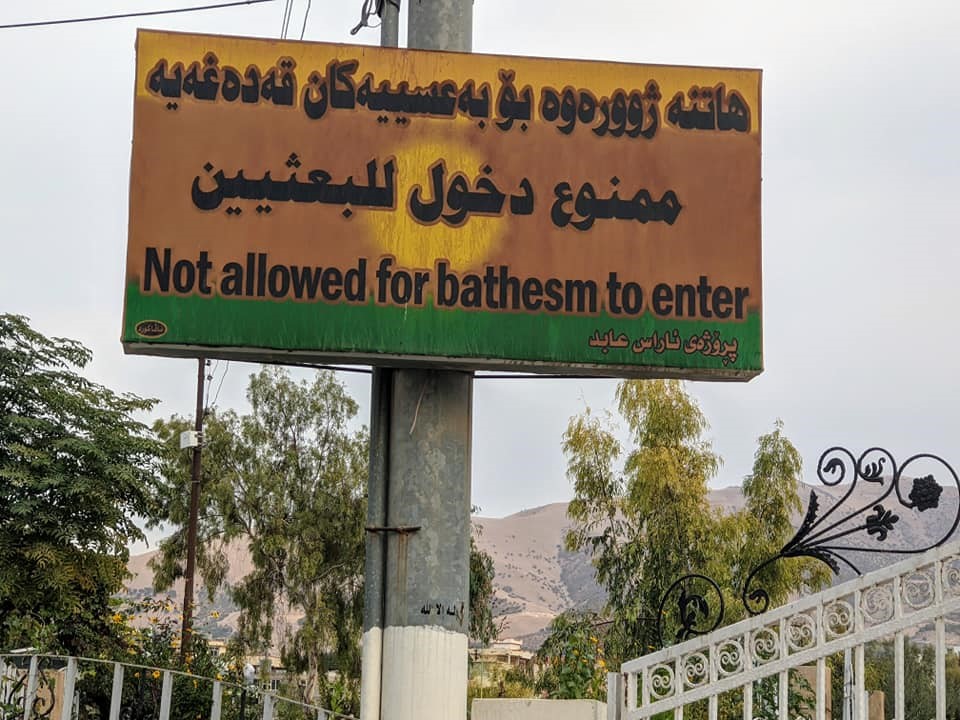 At the entry to the Genocide Cemetery in Halabja, Iraq

Starting 1941, persecution of Jews in Iraq was rampant with pogroms and mass murder. Jews were then ethnically cleansed from Iraq by early 1950’s. Baathists made multiple efforts to expel and intimidate Christians who were members of the Syriac Orthodox Church, Chaldean Christians, and Assyrians. As in Lithuania, history has been rewritten to give the perpetrators a veneer of respectability.

Genocide has been a state of being for humans since the beginning of time. Inverting truth is the 10th stage of genocide, which means the genocide of our own Jewish Lithuanian families is currently ongoing in the form of genocide of truth. While countries such as Iraq and Lithuania blatantly continue to engage in this stage of genocide in front of an enlightened world, it means that ongoing genocides such as Tigray, Uighurs, Rohingya, and others are facilitated without consequence.

My tour of Iraq included visiting sacred places, seeking opportunities to assist victims of genocide, and establishing truth. Our Jewish dedication to “Never Again” requires that we demand truth from perpetrators, and that reconciliation be based on truth first. Allowing Holocaust and genocide denial from governments perpetuates and enables the status quo. We Jews can take lessons from our Kurdish brothers: Truth is a prerequisite to reconciliation.

Visiting Iraq was entirely different to our Lithuanian “murdered Jew tourism”. I saw how Kurds and Yazidis are building modern and vibrant societies in the places they were slaughtered. Iraqi Kurdistan is a “must visit” destination for the resurrection and resiliency of humanity. It is a vibrant, modern, colorful society in its glory. For us, visiting Lithuania is visiting death, while visiting Kurdistan is visiting life. Not only might Kurds be our Jewish cousins, their life experiences parallel our own.