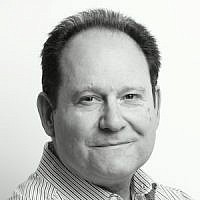 The Blogs
Aaron Wapner
Apply for a Blog
Advertisement
Please note that the posts on The Blogs are contributed by third parties. The opinions, facts and any media content in them are presented solely by the authors, and neither The Times of Israel nor its partners assume any responsibility for them. Please contact us in case of abuse. In case of abuse,
Report this post.

Chanukah is approaching. It celebrates the successful Hasmonean uprising that re-established Jewish sovereignty over the Land of Israel. Yet despite this commemoration and overwhelming historical and archaeological evidence chronicling Jewish life in Israel for thousands of  years, a campaign denying any Jewish presence in Eretz Yisrael continues to grow.

In an April, 2014 Adnan Al-Damiri, spokesman for the PA Security Forces referred to an attempt by Israel to create “a history of Israel and the Jews in Jerusalem which is nonexistent.” Likewise in June of this year, Hanna Issa, Secretary-General of the Islamic-Christian Council for Jerusalem, commented that “in the past, the Near East knew ancient civilizations of various kinds that succeeded each other, but it never saw or knew any Jewish civilization.” These examples are emblematic of an official Palestinian policy that denies any historic connection between the Land of Israel and the Jewish people. It is a new “Big Lie”.

It is difficult to know how much effect this campaign is having.  But, increasingly, even long time friends rarely mention what was taken for granted in generations passed – that Israel is the homeland of the Jewish people. In June, 2009 for example, President Obama delivered a major address at Cairo University. In this message, the President urged the audience to condemn Holocaust denial, reject anti-Semitic stereo types and accept Israel’s right to exist.

While no supporter of the Jewish state could object to the President’s plea, there was one telling omission amongst his remarks.  Mr. Obama commented that the “aspiration for a Jewish Homeland is rooted in a tragic history that cannot be denied.” In this depiction, the President chose to describe the impetus for the Jewish state as a response to anti-Semitism without also acknowledging the Jewish people’s basic desire to return home.

To his credit, the Mr. Obama addressed this oversight during his March, 2013 visit to Israel stating that”the dream of true freedom finally found its full expression in the Zionist idea — to be a free people in your homeland“. Nonetheless, the President’s speech in Cairo was a missed “teachable moment” to state clearly and unambiguously to the entire Arab world that Israel is the rightful home of the Jewish people.  This issue, the legitimacy of the Jewish claim to the land of Israel and especially Jerusalem has become the nexus of the Arab-Israeli conflict. More than questions of territory, security or population, its resolution will determine if true peace can be established between Israel and the Palestinians.

Even amongst Arabs ready to accept Israel, the recognition of a specific Jewish right to the land is an almost universal taboo. And amongst those who reject any compromise, opposition to this fundamental principle has become the focus of their propaganda effort. A recent example of this struggle concerns a historical exhibition co-sponsored by UNESCO and the Simon Wiesenthal Centre.  According to Robert Wistrich, a professor of History at Hebrew University and the author of the exhibition, this project was designed to illustrate “the uninterrupted presence of Jews in the land of Israel for over three millennia.”  Groundbreaking for both its content and sponsorship, it was the first exhibition backed by a UN agency which acknowledged the Jewish people’s ties to the land of Israel.

The successful Arab campaign to erase “Israel” from the exhibit underscores the persistent efforts being waged   to “de-Judaize” Eretz Yisrael.  This process is relentless and pursued at the highest levels. At Camp David for example, Yasser Arafat shamelessly told President Bill Clinton, that no Jewish Temple ever existed where Al Aqsa Mosque now stands.  Mr. Clinton rejected this claim and reaffirmed that the Temple was the first house of worship on the site.

What can be done to address this persistent denial? Prime Minister Netanyahu has moved the issue front and center by insisting that Israel be recognized as a Jewish state. But beyond policy, how can de-Judaization be confronted and the Jewish character of the land be emphasized?  Perhaps part of the answer lies in Professor Wistrich’s work. His exhibition is the logical starting point for a much larger project – a world class museum and educational institute highlighting Jewish life in Israel throughout the ages.  Since this institution would serve as a living symbol of Am Yisrael, B’Aretz Yisrael – the People of Israel in the Land of Israel, Museum Artzeinu, The Museum of Our Land is offered as a prospective name for this organization.

Two fundamental principles would guide the creation and operation of Museum Artzeinu: impeccable scholarship and state of the art presentation.  Professor Wistrich has already provided a model for the former by ensuring that the content of his exhibition adhered to the most stringent academic standards. This same commitment would be made within Museum Artzeinu.

But while content is critical, an exceptional presentation would ensure that the message is conveyed and retained. To this end, Museum Artzeinu would utilize the most innovative techniques and technologies including 3D and hologram video presentations, immersive walkthroughs, dioramas, and live theatrical performances

Since archaeological activity and historical research never cease in Israel, Museum Artzeinu would be continuously enhanced with content reflecting new discoveries impacting Jewish history. The December 2013 unearthing of the first Hasmonean ruins in Jerusalem is a recent example of an archaeological find that could be represented in a new exhibition.

Museum Artzeinu would also be chartered as an educational institution. It would create programs and traveling exhibits like Professor Wistrich’s that would reach audiences throughout the world. More importantly, it would provide educational opportunities for Jewish youth within Israel and the Diaspora. Like Birthright, programs would be designed for Jews of every national and religious orientation but all flavors would focus on the Jewish people’s experience in Land of Israel.

The creation of Museum Artzeinu addresses a number of concerns but it also calls attention to the reticence of some Jews both in Israel and the Diaspora to confidently assert that Israel belongs to the Jewish people.  If a Palestinian is asked “Who is the rightful owner of the land on either side of the Green line”, his response is unequivocal and to the point: “This is Arab land and Jews have no right to be here.”  Ask a Jew the same question and it is not unusual to hear some hesitation to similarly claim the land without reservation. Why this is so is the topic of another discussion but this reluctance exists and it is troubling. While the establishment of Museum Artzeinu would not resolve this national self-doubt on its own, it could serve as a base for combating de-Judaization and as a bricks and mortar symbol of Jewish nation’s determination to unapologetially declare that Israel is home.

About the Author
Aaron Wapner is a software consultant in Toronto, Canada. Aaron writes about Israel and Jewish life in the Diaspora.
Related Topics
Related Posts
Comments