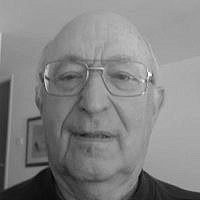 The Blogs
Yitzhak Irving Kalet
Apply for a Blog
Please note that the posts on The Blogs are contributed by third parties. The opinions, facts and any media content in them are presented solely by the authors, and neither The Times of Israel nor its partners assume any responsibility for them. Please contact us in case of abuse. In case of abuse,
Report this post.

She did not. Sometime in the spring of 1942, she was killed in Poland. She and the rest of my mother’s family and the rest of my father’s family, as well, were murdered in the forests outside of a small town in Poland called Slonim. The Jews in Slonim were killed by Germany’s Sonnerkommando units in the mass murders of thousands of Jews on a few different days during the spring of 1942. This, about the same time as the beginning of the operation of the mass murder factories of the Treblinka and Sobibor.

Esther was born in 1926, which meant that she was about sixteen years old at the time of her murder. About the same age of Anna Frank and tens of thousands of other young Jewish girls in Europe, who were slaughtered during the Holocaust. In fact, only in the last few years have I begun to refer to Esther as my Aunt. She has always been my mother’s sister. Just as her mother and my mother’s other four brothers and sisters, have always been called my mother’s mother and my mother’s brothers and sisters, and not my grandmother and not my aunts and uncles. And just as my father’s sister, and her husband and her small son were not called my aunt and uncle, and my cousin.

I never knew Esther nor any of the other members of my parents’ families who stayed behind in Poland. I was born in January of 1941. I am not even sure that Esther knew that I had been born. I am not sure that she knew that her sister, Sonia, in America, had given birth to a second boy. Esther has always been that nine-year-old girl next to my mother, in the last picture which was taken of my mother’s family in 1935, before she came to America to live with her husband, my father. It was the last picture of all of them alive and smiling. For some reason only after the birth of my youngest grandson, almost ten years ago, did I start to think about whether my grandmother and all the other relatives in Poland even knew that I had been born in January of 1941, a few months before the German armies invaded Poland and started the slaughter of the Jews, first by bullets and then by gas. Only in the past few years have I been able to think about how they all met their death in that forest outside Slonim.

My aunt, my grandmother and the other older sisters and brothers, going naked together to those big holes in the ground, which other Jews had been forced to dig, to be slaughtered as animals, by the Germans and the Ukrainians and the Lithuanians and the Poles and who knows who else. This is the truth! This was the Shoah. This was the Holocaust! Neither a special day of remembrance, nor a ceremony, nor a museum, nor academic research will ever change what happened to my Aunt Esther and all the others! She and they were the Holocaust!!!

Yes, we must remember, and we must investigate and do research but the pain, the horror and the suffering of all those like my Aunt Esther, is the Holocaust. I have the feeling that somehow their suffering is being lost in all the ceremonies, including Yom HaShoa here in Israel and the International Holocaust Remembrance Day in the rest of the world. We must remember the individuals and we must listen to the stories of those who survived, as long as they are alive!

About the Author
Yitzhak has been living in Israel since 1970. He teaches electrical engineering at Ariel University and at Columbia University (by zoom!)
Related Topics
Related Posts
Comments