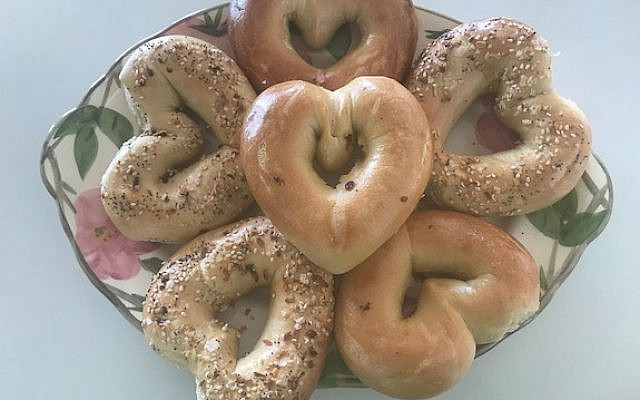 Sitting out the pandemic, I’ve developed a serious addiction.

Experts say addictions run in families. They’re in the genes. And even if the addiction is not genetic, it’s certainly been breeding in my natural habitat, nurtured weekly over Sunday brunch.

My addiction? Bagels. I have to have them. Often twice a day.

And I’m not just hooked on any bagels. I’m addicted to $3-a-piece bagels!

It started innocently enough. I received a dozen as a birthday gift. I never would have spent so much on my own. So expensive! Such indulgence! But once gifted, I was hooked. They really are the tastiest bagels I’ve eaten this side of the Mississippi. This side of the Hudson River, in fact!

Yet, what would my grandmother say if she knew I’m shelling out $3 for a bagel — and not just for plain bagels, but for bagels with “everything.” Or worse yet, cinnamon-raisin bagels. If she was alive, Grandma would call a doctor. Then, her rabbi, bemoaning she had a bagel heretic in the family.

My bagel profligacy would spark a family crisis. Grandma would chide — no, she would upbraid — my mother for her faulty childrearing ways. In turn, my mother would blame my grandmother, pointing out she was the one who bought my first lollipop, thus cultivating my taste for sweets and this unnatural desire for the unbagel-ly cinnamon-raisin bagel.

I try to cut back. Each day I try to eat only half a bagel at breakfast and save the second half for lunch. But if the bagel has a topping, as is the case with an “everything,” how to decide which half to eat first — the top or the bottom? Cutting a bagel horizontally first, then vertically seems complicated and also, just wrong. And, honestly, I lack the control to eat half. Bagels are like potato chips. You cannot stop. Or, at least, I cannot.

Supermarket bagels are less expensive but don’t cut it — even if they are pre-cut. They’re too sweet. Or too soft or too meh.

Sometimes I buy bagels at another bagel shop that sells them for a “mere” $2.00 each, but they don’t compare. So, I’m stuck with my costly faves.

I try limiting myself to a once-a-month online purchase of two dozen-ish. But the order rarely lasts that long. I fight the urge to re-order, but, of course, fail.

But please don’t think I am completely out of control. Not so.

I am absolutely strategic when ordering with an eye to a proper selection balance. How many “everythings?” How many cinnamon-raisin? And how many “salt” bagels for my husband? Ditto plain, sesame seed, poppy seed, and pumpernickel.

It’s a complex epicurean and math equation — so complex it would have taxed even the bellies and minds of Einstein and Hawkins (if Hawkins had been Jewish and liked bagels and lox).

Lox! That’s when I realize I’ve forgotten the lox and cream cheese!

Error corrected, exhausted, I finally hit the “pay” button, trying not to look at the total price for my shameful addiction. I don’t need to. I know it’s a lot of money. And, as the granddaughter of immigrants, I know I am a poor reflection of their frugality and hard work. But in my defense, I ask: is it my fault that they raised me to love good bagels?

So, even with my order placed, I worry some more. Not just about the crazy cost, but also about the calories. Where will this profligacy and gluttony lead? Will I soon be jonesing for belly- and budget-busting bialys and babkas?

But then, I pause. I take solace.

Bagels, bialys, babkas, and guilt. They’re all part of my Jewish heritage. They worked for Grandma. She managed a budget and cared for her family through times of plenty and times of worry. Today those traits and those foods are working for me too!

Time to set aside the worry. In fact, I need to hurry and set the table for Sunday brunch. My bagel delivery — and the family, still socially distanced — are arriving soon.

About the Author
Karen Galatz is the author of Muddling through Middle Age, which provides women (and men) of a certain age a light-hearted look at the perils and pleasures of growing older. An award-winning journalist, her national news credits include The MacNeil/Lehrer NewsHour and the Nightly Business Report. Her fiction and non-fiction writing has been published across the U.S. More of Karen's writing can be read here: muddling.me A native of New York City and Las Vegas, Karen now lives in Berkeley, CA with her husband, two children, and one neurotic dog named Olga, rescued from Florida’s Hurricane Erma. It all makes for a lot of geography and a lot of humor.
Related Topics
Related Posts
Comments

Counting Our Days Is an Antidote to ‘Languishing’
Shuly Rubin Schwartz