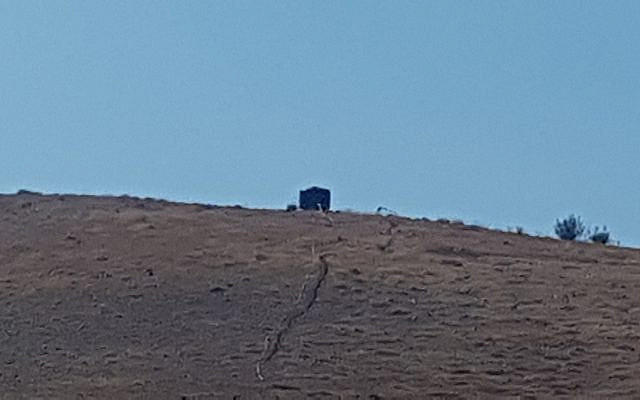 New Outpost Set Up This Week Above Givat Salit

Parashat Ekev raises many important theological and spiritual questions.  As I recently discussed briefly, are God’s threats in our Torah portion still in place? Now that we have returned to our land, could God expel us again?  Must we accept all of God’s gifts? If God says that we will possess everything from the Euphrates River to the Mediterranean Sea, are we sinning if we say, as did Esau, “We don’t need all of that territory. We have enough.”?  Is it wrong to leave other nations in our territory when God promises to drive them out?  Does what God said about the nations of the time apply to the nations of today?  For those humanists and universalists for whom the Torah is just a non-authoritative book, these questions are something between irrelevant and offensive.  Why work so hard to redeem a book that is so far from universal values? To those who consciously or unconsciously seek a religious justification/obligation to drive out non-Jews from “our” country, the answer is clear. To those of us for whom God is a Commanding Presence in our lives, but for whom the oppression and dispossession of non-Jews runs contrary to everything we believe about God, these verses are a challenge.

On Wednesday I was planning to visit the area near the Maskiot settlement in the northern Jordan valley, where we have been following the construction of a settler fence preventing the Bedouin from accessing grazing areas for their cattle.  We heard that one night a week ago settlers also set upon one of the Bedouin who was sleeping in the fields, and scattered his cows.  We also received a report that the settler behind the building of the fence had now created a shelter in order to allow his cattle to stay in the fields he wished to take over.

However, we were first diverted because of the reports that a new outpost was being set up above the Givat Salit outpost, close to the Meholot settlement.  When we arrived two “traktoronim” – all terrain vehicles came tearing down towards us, and we were prepared for the worse.  However, two young men asked that we turn off the cameras, so that we could talk heart to heart.   One of them had a kippah and tzitzit, the other was bareheaded, and apparently a soldier on leave It was a surreal experience, but I am almost always willing to talk with whom I have huge moral differences, if they truly want to talk.  The man did most of the talking. He explained that they were setting up the outpost as an alternative for the youth who were sitting at home with their smartphones.  We at least agreed that spending all day with one’s smartphone was a problem.  We assured him that we hadn’t come to physically tear down the outpost, but he wasn’t very happy when I explained that we had already reported to the army.

He didn’t have much interest in talking to my fellow activist, who Is secular. He was very curious to understand why I, as a religious Jew, protect Palestinians.  His basic outlook could have been taken straight from this week’s Torah portion.  The Land is ours, and we should care more about our fellow Jews more than non-Jews. Rabbi Akiva taught that if we are in the dessert and have a bottle of water, we don’t share it in order to save ourselves. Yes, all human beings are created in God’s Image. But the fact that the Talmud teaches to violate the Sabbath to save a Jew, but not to save a non-Jew, shows that the fact that we are all created in God’s Image doesn’t mean that we are to treat every human being equally.  Yes, there are more recent texts and authorities mandating that we would of course save a non-Jew, but they aren’t so important….

My response was twofold. Firstly, of all, there is debate on these issue from Talmudic times until our own day.  The God I believe in demands that we care for all human life, including on the Sabbath.  Our tradition is not as simplistic and straightforward as you want to make it out to be. Secondly, I tried to ask this young man whether there was no place in his heart for the Bedouin shepherds living near him, who are being prevented by settlers and/or the army from accessing grazing lands, who receive threatening nighttime visits after they are seen with us, etc.

There is also more than one way to read our Torah portion.  We are told to destroy all the people that God delivers to us (Deuteronomy 7:16), but also taught these nations are punished for their sins, and God will do the same to us, if we behave unjustly (Deuteronomy 8:19-20, 9:4-5). To those who say that the prophets said that once we return, we will never be exiled again, I remind them that the prophets prophesied before the first exile. We returned, and there was a second exile. And, Rabbi Yehoshua Ben Hananya won the argument that the specific nations we were commanded no longer exist (Mishna Yadayim 4:4).

We are also taught that God does not give us the Land because of any virtue of ours (9:6), and that we must feel gratitude for all of the blessings that we have been granted (8:7-10)

Ultimately, along with promises of the Land, and its blessings, we are told not only must we not harm or oppress the weak and oppressed living among us, but we must pro-actively act ensure justice and care for the orphan, widow and non-Jew living among us.  (And yes, there are differences of opinion as to whether the ger is any non-Jew, the non-Jew who has rejected idolatry and adopted basic ethical values, or only the non-Jew who has converted to Judaism).

Many of the commentators note that it is no accident that this command occurs in Deuteronomy 10:18-19, just after the words we use at the opening of the Amidah prayer, that God is great, mighty and awesome (10:17). God’s might and greatness is expressed in through God’s concern for those who are “lowly” in the eyes of many.  Rashi and others even say that this is an expression of God’s Humility.

Today we revel in the fact that, after thousands of years of being the weak and oppressed, we are great, mighty and awesome.  Perhaps we are not worshiping idols or graven images or trees, but some are worshiping ourselves and the Land. I told these young men that this is true idolatry.

Could our greatness be expressed through our humbleness? Through concern for the weak and oppressed, both Jewish and non-Jewish?  Could a young man living in a settlement supported by the might of the Jewish State find God within him when he sees God in the shepherds his fellow settlers are oppressing? In the words of our haftarah, could he understand that seeing God and pursuing justice for the “lowly” non-Jewish shepherd are synonymous (Isaiah 51:1)?