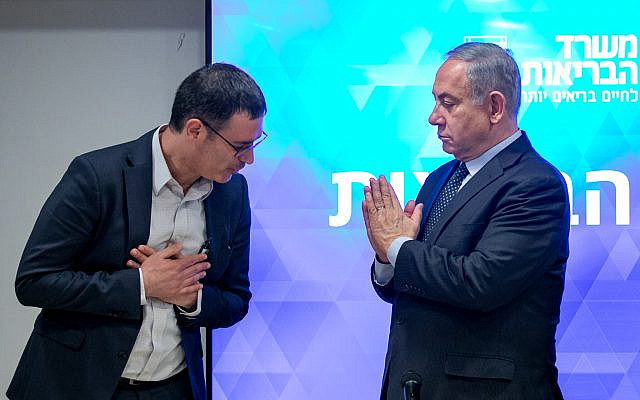 I’ll start at the end. While no policy can be infallible given all the unknowns in dealing with COVID-19, and knowing that we have yet to deal with the economic and social fallout of our chosen policies, I believe that Prime Minister Benjamin Netanyahu is doing an impressive job in dealing with this pandemic.

There. I said it. And I’m saying it independently of Bibi’s own self-promotional posts on the matter. And now that I’ve sufficiently alienated my half of the electorate, I’ll go ahead and alienate the other half. I have not had a good word to say about Netanyahu since he served as Israel’s representative to the United Nations over 30 years ago. I not only disagree with his underlying economic and political philosophies and policies, but I loathe his decades-long tradition of incitement and his egotism, and I’m suspicious that he’s guilty of the numerous crimes for which he is currently under indictment (but I’ll reserve judgement until the courts decide).

And yet – here he is. Navigating the ship through this storm in a way that should cause other countries to take note. Israel’s COVID-19 statistics – as of this writing – support this proposition. Israel has suffered relatively few deaths compared to our friends in Europe and North America, our hospitals not yet overloaded and beyond their capacities, and transmission rates are slowing. There are worrying trends in ultra-Orthodox neighborhoods and in nursing homes, and Israel has been slow to administer mass testing – but these difficult and distressing challenges, too, are receiving attention, if not perfect policy remedies.

What is Netanyahu doing right? He is implementing the recommendations of the Ministry of Health professionals, and letting that ministry set the tone and tempo of Israel’s response. The Health Ministry’s response, notwithstanding its ineffective and potentially harmful minister, has been largely measured and effective. It is true that a country-wide shutdown was a drastic act, with tremendous social and economic repercussions. But Netanyahu has rightly put the authority and priorities of the Ministry of Health before the complaints of the Ministries of Finance and Defense. Unlike his contemporaries on the US right, some of whom have gone so far as to suggest older Americans should be happy to sacrifice themselves for the good of the American economy, Netanyahu is putting people’s lives before profit. And he has resisted the efforts of Minister of Defense, Naftali Bennett who, attempting to make himself relevant, has tried to convince Netanyahu to give the army the responsibility over fighting the virus. Bennett has been portrayed as sowing criticism, and thus confusion, as he positions himself politically for the day after COVID-19. The army, of course, is playing a crucial role in containing the spread of the virus, but thankfully it is not the Minister of Defense who is calling the shots.

Netanyahu is also broadcasting a consistent, scientifically informed message and sticking with a consistent policy that doesn’t contradict the consensus among experts. We need to flatten the curve. We need social distancing. We need to look after one another. The virus is a serious threat to our lives and wellbeing. This is an important message to hear – unadulterated, unswerving and uncompromising. One only has to look to the United States to understand the catastrophic implications of a leader who hasn’t a clue (or a care) about science or about the gravity of the problem, and who doesn’t even express empathy for the citizens dying on his watch (instead, he fixates about good numbers and bad numbers). One only has to look to the United Kingdom to see the fatal implications of its zig-zagging policy. Netanyahu and his advisors are scanning the world to identify the policies have proven themselves effective (South Korea, Taiwan, China) and implemented them here with local adaptations.

Finally, our government is operating, for the most part, in a transparent fashion. Policies are announced and the reasoning behind them are explained and debated every evening. While there may not be consensus, transparent decisions are made. Transparency, one of the vital cornerstones of democracy, has been particularly important when working with the ultra-orthodox communities of Jerusalem and Bnei Barak, who have been put under tight restrictions on movement. The reception of these policies within those communities could have been much worse, considering the lack of knowledge those residents had about the pandemic and its implications.

So far, so good. But the next few months will also be crucial in addressing the unintended outcome of the necessarily draconian policies put in place to fight the pandemic. Will Netanyahu realize that the health system is in drastic need of investment? Will policies be put in place to help the weakest economic sectors to recover and thrive? Will he assist small business owners to get back on their feet? Will workers’ rights be restored and strengthened? Will phone surveillance measures be rolled back once they are no longer relevant for control of the pandemic? The always insightful Yuval Noah Harari emphasizes that the answer to this final question will be crucial in determining the kind of world we will inhabit post COVID-19.

Things could still go terribly wrong. Netanyahu could use the cover of the crisis to further degrade the foundations of Israeli democracy by weakening the judicial system and the press. He could use the opportunity, already seeming likely, to annex territory in the West Bank. He could look longingly to Trump, Orban and Putin, who are using the opportunity to solidify their own power at the expense of their countries’ democratic institutions. Alternatively, he could form a strong centrist coalition government with Benny Ganz, which would display his commitment to the good of the country, its citizens and its institutions over the narrow ideological and personal interests of his political camp.

If Netanyahu can continue the course in dealing with the pandemic, and in the coming months, lay the groundwork for social and economic recovery and resilience-building, fighting COVID-19 could be the noble and illustrious swan song for his long, controversial political career. Then, even if he concludes his premiership with court indictments and perennial reputation for putting his own political survival before the wellbeing of the country, he can also rightfully and proudly claim that he navigated the country away from the worst impacts of the horrendous COVID-19 pandemic.