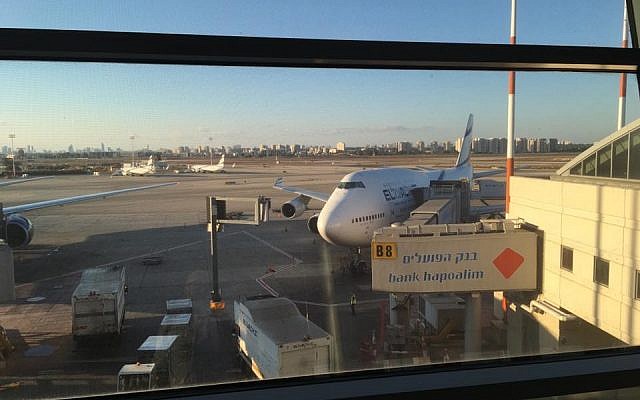 I was in the window seat the last row of the plane, near the bathrooms and the work station for the flight attendants. The person in the aisle seat next to me, a tough looking lady with tattoos who could probably beat me up without too much effort, was angry at having to fly economy class. She hardly said a word to me prior to takeoff, but one thing she did tell me was that she was used to flying business class on the way back from her business trips but that those seats were all taken on this flight, which was why she was sitting next to me.

Her body English made it perfectly clear she did not want to talk.

Being an inveterate conversationalist, I plodded along anyways, telling her I did pro-Israel work in the U.S. and was dedicated to trying to get Christians to stop saying untrue and unfair things about the country. The look of disdain on her face left me guessing. Was her contempt directed at the Christians who beat up on Israel or at me for caring what they said about the country?

I couldn’t decide, but was simply too frightened to ask. Eventually, she turned on her side and kept her back to me as she slept.

I did what I could to keep myself busy. I read. I wrote in my journal, read some more and tried to sleep. After a few hours into the flight, one of the stewardesses came down the aisle. She took a look at the woman in the seat next to me and then looked at me.

“Sure!” I said. She put the box of fruit on the table in front of me and I devoured it right quick. It was great stuff. A full meal of fruit. The grapefruit was exquisite! A few minutes later, the stewardess came back and I gave her the box I had just emptied, put up the seat-table and went to sleep.

When I woke up, the woman looked even unhappier than she was before.

In an effort to boost her spirits, I told her about my midnight meal,

“Too bad you were sleeping during the flight,” I said. “The stewardess was handing out fruit!”

“That was my fruit,” she said. She was a vegetarian and the fruit tray I had devoured while she was sleeping was special ordered for her.

“I went up to the stewardess and asked where my meal was and they said, ‘We gave it to your husband,’” she said. “I told them I was traveling alone.”

It was another couple of hours before we landed.