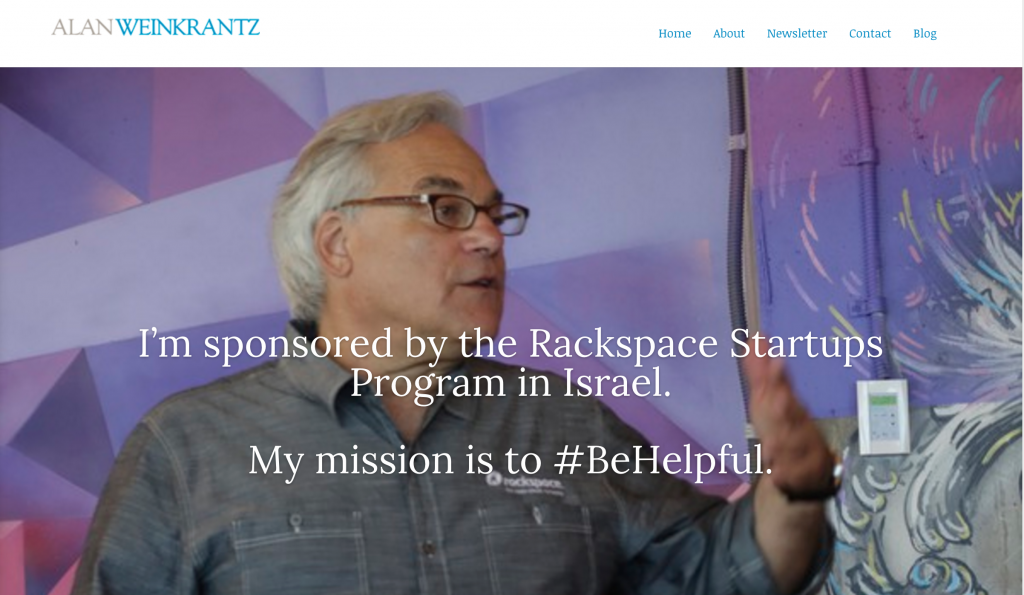 Since November, 2014, I have been serving in a consulting role to Rackspace, to help develop their presence in the startup ecosystem of Israel.

My mission has been completed and the awesome team from the Startups Program are going to take over in handling and managing current and new customers.

I am going to be winding down my role and now on a journey to explore what could be next, effective March 1.

I will be 1/2 time with Rackspace for the months of January and February to ensure a successful transition.

First… some of the backstory….

After 33 years of running boutique PR firm, I decided to take a two-year break, travel, do some very limited consulting work and then decide to return to work.

Having traveled back and forth to Israel for two decades and having been part of the first wave of startups that created the beginnings of VoIP, IPTV, enterprise hardware and software, the rise of computer security, the tablet PC, and many other transformational technologies we take for granted everyday, I wanted to return again to work in the startup ecosystem.

This time I did it with a different approach.

For many years, I knew the founders of a small hosting company that was based in San Antonio, where I’ve made my home for 30 years.

That small company grew up to be a very big one, and is now a $2 billion a year business.

For many years there was an interest in exploring what could be in Israel. And given that I was based in San Antonio, had extensive travels back and forth to Israel, and knew and understood the company and more importantly the company’s culture and values, Rob La Gesse, VP of Social Strategies, gave me the opportunity to move and spend one year breaking new ground in the startup ecosystem for the Rackspace Startups Program.

I landed on November 1, 2014 and went to work. I was a contractor, but always thought of myself as a “Racker.”

Rackspace is a unique company. It has a culture of caring and humanity unlike any I have ever encountered. Inherent in being one of the world’s greatest service delivery companies, humanity and just being human is core to their culture and DNA.

I worked at just about every accelerator and co-working space in Tel Aviv, Jerusalem, Haifa, Nazareth and Be’er Sheva.

I shared my Above the Code method at various speaking events, mentored one-on-one to hundreds of startups, took part in major startup events throughout the country, wrote for the startup section of The Times of Israel and for Geektime, the world’s largest global tech blog outside of the U.S.

I was able to leverage my writing and content skills in exchange for sponsorships that put the Rackspace brand in front of thousands of startup entrepreneurs, VCs, suppliers, and professional service providers.

I also on-boarded companies to the Rackspace Startups program where we gave our startup customers a one year trial to test our platform and Fanatical Support® offering. In doing so, I had a bird’s eye view of hundreds of startups all trying to bring about the next big thing.

On a personal note, it gave me a chance to live and work in Israel for an extended period of time. While I had made fifty previous trips to StartupNation, I had never spent more than two weeks at time. I also traveled to regional ecosystems including Berlin, Prague, Istanbul, and Athens.

Living in Israel, being in the second largest startup and innovation ecosystem in the world, and experiencing the culture and life of the Middle East has been incredible and life changing experience.

Everyone is not six, but one degree of separation. Even though I “knew” many people before I came, at least half of the new contacts I made here were made specific to this mission.

The startups were really a way to not only to build a community and get companies to try the Rackspace experience, but build awareness and let the entire ecosystem know that the #1 managed cloud company had an initial presence in StartupNation.

I am profoundly grateful for the experience to work with, and serve the team, and most of all, the ecosystem of Israel and regional startup communities.

My engagement ends at the February 28, and I’m now free to explore what might be next, and where I can invest my experience and energy.

I am blessed to have had this role, create some very deep and what I hope will be long lasting friendships in the ecosystem not only of Israel, but other regions that I also traveled to, including Berlin, Athens, and Prague.

While I have a home in San Antonio, I want to remain in Israel, base here, work from here, and look at expanding my reach and impact worldwide.

I am looking to:

So… what’s next? Should we connect?

While my background has been in public relations, communications, and business development, everything I have ever done, and done well, I have never done before.

The value I bring is in making something out of nothing.

As for what’s next, here’s what I am currently exploring:

I am less inclined to fill a “job.”

I want to help you and your organization add value, make things happen, leverage my knowledge and contacts of the Israel and the regional startup and innovation ecosystems, and possibly create new businesses and processes that will move a company or organization up the value chain in 2016 and beyond.

You can Google my name  –  Alan Weinkrantz –  and if your instinct says, “let’s talk,” please reach out.