The Blogs
Chavi Feldman
Apply for a Blog
Advertisement
Please note that the posts on The Blogs are contributed by third parties. The opinions, facts and any media content in them are presented solely by the authors, and neither The Times of Israel nor its partners assume any responsibility for them. Please contact us in case of abuse. In case of abuse,
Report this post. 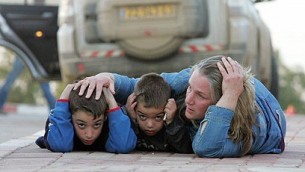 So far, as the dog days of summer inch by, I see countless of posts on Facebook by my friends and family. Pictures of kids living it up in the summer like they are supposed to. Having fun at camp, and frolicking at the beach, their smiles so wide and genuine. And it all seems so fun, so carefree. So normal. My kids were supposed to have that kind of summer. But…

Normally, when June comes to a close, I, along with most parents, exhale a long sigh of relief. Along with the intense heat, the beginning of summer in Israel brings with it a loosening of the knots in my shoulders and a liberating feeling of letting go. No more homework, no more rigid schedules and no more carpool. Curfews are more relaxed and the real fun begins. There are usually talks of heading to the beach on Fridays, maybe with the dog in tow, and perhaps a mid-week trip to the Sachne and its grottos complete with swimsuits, sunscreen and sandwiches.

Not so this summer.

The beach is currently off limits and we’re patiently waiting (and hoping and praying) for things to settle down a little before planning a fun day trip to the Sachne. But when you’re a mom, summer is still summer and kids should still be allowed to be kids. So I try to walk that impossibly thin line between what used to be our normal and what has now become our new normal.

I signed up my kids for cooking camp and sewing lessons and made sure they’ve got what to be busy with for these long lazy eight weeks. My son is busy with his summer job at the bookstore, trying to pad his wallet before going to Mechina in September, and I find myself reminding him time and time again not to hitchhike home if he’s alone, something I never did before this summer. My youngest, finished with cooking camp, is happily working at the local pizza store before she starts her two week stint at sleepover camp in the north and we’ve had the distinct pleasure of having her as our waitress when we ate there last week. When we all come together for dinner, there are funny stories to regale, hilarious moments, and the usual bickering between the siblings. Inevitably there’s the nightly argument about whose turn it is to walk the dog, or do the dishes. In other words, normal. But then my youngest hears a siren and begins to panic. Turns out it was only (only!) the nightly news rebroadcasting the sirens that were heard all day in Ashkelon. And while I’ve known about the army base that is located very close to our yishuv almost since the day I moved here, every time I hear shots being fired, I have to remind myself against and again that it’s just our guys in training, and not something more sinister. Understandably, we’re all a little jumpy….

I was busy this past Sunday morning designing a two-tiered Bat Mitzvah cake for a client, which I then delivered to Jerusalem. Again, not an unusual morning for me. Instead of heading straight home afterwards, my husband, my daughter and I lazily wandered around downtown Jerusalem, window shopping for art and treating ourselves to a falafel and an iced coffee. It was such a beautiful, unusually cool and windy day – gorgeous for the end of July – and it seemed, for those isolated forty minutes, like such a blissfully normal summery thing to do. Then we were back in the car listening to the radio broadcast about the thirteen Golani soldiers that were killed. And our normal changed yet again.

This past Shabbat, our table conversation, which was once filled with only jokes, funny stories and always plenty of laughter, was instead a place of serious debate and discussion about peace, Gaza, tunnels, suicide bombers and our shaky history as Jews living in this country. Hearing my oldest, who is serving in the IDF, wonder out loud whether or not Arabs are pre-disposed to hating us because of the biblical story surrounding Abraham, Sarah, Hagar and Ishmael opened up an interesting and somber exchange about the Torah and the sad impossibility of peace between our two nations. The conversation then veered to the global anti-Israel/anti-Semitic/anti-Zionist “trend” that seems to have infected not just all of Europe like a persistent plague, but is rapidly creeping into North America as well. Even more depressing. But then, after our guests left and I went to bed, my husband and my kids switched gears and cleared off the table and got it ready for their sacred Friday night Settlers of Catan marathon, which runs well into the early hours of Shabbat morning. And I realized that even my kids are getting used to living in both worlds. And it’s not easy – mentally or physically – this yo-yo-ing back and forth between our old normal and our new normal. One minute you’re enjoying a delicious yoghurt shake while driving home with the windows wide open and the wind in your hair, but then a minute later you see a highway sign instructing you what to do if you’re stuck behind the wheel when a siren goes off. And the reality of it snaps you cruelly back to the present. And these days of whiplash are wearing us down, despite how well, considering, we are all trying to deal with it. And I don’t live in the south. I can’t imagine how they are dealing with it…

It somewhat hit home when I checked my Facebook and saw that my youngest, who is 14, has been sharing countless IDF posts instead of the hilarious YouTube videos about funny dogs and their funnier owners that she usually shares. To my surprise, I discovered that she’d not only downloaded the Red Alert app which – for the record – has not stopped beeping these last two weeks, but she also downloaded a local news app and gets regular updates of what’s been going on in our country. A new normal for her, I suppose.

Last night, I read a news report out loud to my 14 and 16 year old girls about a Gazan that was being rushed to Soroka hospital in Beer Sheva because his hand had suffered a serious gunshot wound. My 14 year old piped up and asked me why we would bother tying up our ambulances and our medics in order to help the enemy. My 16 year old responded lightning quick: “Because we are humane. And because we care.” And then she paused, turned to me and asked, “do you think once he’s stitched and bandaged up, he’ll go back to Gaza and try to kill us again?” Out of the mouth of babes…

I told her that I didn’t know. But I think I do.

And with a heavy heart, I left the house to head to our synagogue to say Psalms for our soldiers’ and our country’s safety.

And this has become my new normal.

About the Author
Chavi Feldman has a degree in graphic design and advertising and works primarily as a music teacher. She has lived in Israel for more than two decades.
Related Topics
Related Posts
Comments