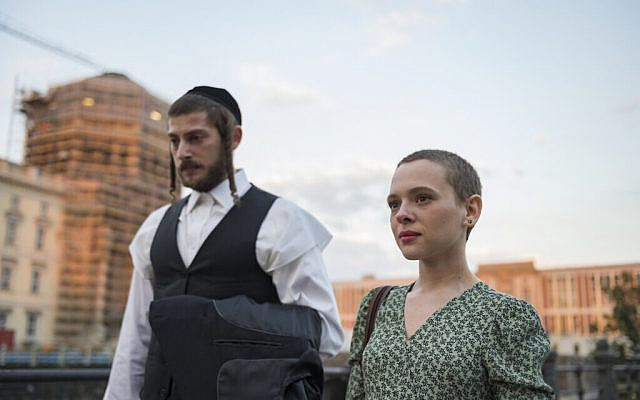 Ok- so some say it is accurate, others say it isn’t accurate, but bottom line…what an incredible series! I didn’t read the book, even though I wanted to many times, because I heard that it really painted a terrible picture and it contained so many lies. Then when Unorthodox came out on Netflix, I did something interesting. I watched “the making of unorthodox” before the show and there they were, saying how they hired people who came from the community to guide them with truth and accuracy, and it was so important to them to paint the right and truthful picture. I wondered if that was true and I started the first episode. Then the second, third and fourth and by the end, I was crying because it is just a magnificent piece of television.

Not only does Shira steal your heart with superb acting, but the story is so obviously touching because it is a story of a person finding themselves- and aren’t we all trying to find ourselves? No matter where we come from or where we arrived, we are all searching. I personally related to many poignant topics that were illustrated in the series, and I absolutely fell in love with Esty.

We are entering the holiday of freedom, albeit cooped up in our homes, and Esty’s story is truly a story of freedom. Yet, and this is being said with the premise that the story was beautifully done, and it deeply touched me, there were so many inaccuracies.

I have many close friends and relatives that are Chasidim. I have spent Shabbos’s in New Square, Belz and Amshimov communities. I knew in my heart of heart that as much as they tried to paint the right picture, they didn’t. I am an orthodox Jew and I live a Dati Leumi lifestyle in Israel and yet I felt as estranged to their culture as a secular person would feel. Nothing in that show came close to my orthodoxy or the lifestyle I live.

I let the show sit with me for a few days and then I called my mother’s close friend, a divorced Satmar woman who grew up and still lives in Williamsburg. After speaking with her, I want to clarify a few things.

First, she told me that is 100% not how they have sex. They are naked, they make love, they give each other pleasure and it is not a chore for the woman or rape. Of course, there are exceptions, but there are exceptions in every cultural community. Halacha states that a man and woman should be undressed- they abide by that. Halacha says a man should give pleasure to his wife- and they abide by that too. The sex scenes, if you can call it that, were completely inaccurate.

Furthermore, everyone knows an orthodox bride rarely goes to the mikvah before her wedding alone. Almost the entire orthodox community goes to the mikvah before her wedding with her mother, sister or close friend. In the Sephardic community, all the relatives go with the bride and they have a celebration at the mikvah! But anyone who knows anything about Chasidim knows that mothers always accompany the bride before their wedding and it’s a beautiful and special experience. A bride gets a “bridal room” and goes to the Bridal Mikvah- which is usually stunning and designed to make the bride feel like a princess. That entire scene was so off; even if she didn’t have a mother, someone would have gone with her.

Another point. The rabbi was not portrayed fairly. I am not saying I agree with everything the current Rebbi does and I am sure there is corruption there like there is in every single community, but I can say that the current Rebbi has helped and been there for many 1000s of women, he tries to guide and not give orders, and he tells women in the community to go on birth control so not to overload emotionally. He is certainly not a dictator in the manner it was portrayed.

Pesach! The seder is one of the most beautiful aspects of the Chasidic culture. Kids are the center of attention and it is not a stale and rigid ceremony. And yes, everyone knows that many people use tin foil to cover their kitchens, but not to that extent! That was incredibly exaggerated! Almost mocking.

Shaving heads. So yes, women do ‘shave’ their heads with their mother after their first night of marriage. I am not going into why and what my opinions are. I will say this. Almost NO one uses a razor- they use scissors and cut the hair very short- but not buzzed off like a sheep. They do it with their mother, privately- without children standing around glaring! And yes, they might cry from the experience and have a hard time with it- but they are prepared and aware of the custom from a young age. It is difficult- but the way it was portrayed in the show was not accurate. It was clearly made to look like abuse. A mother wouldn’t just buzz it all off like that without emotions or caring for their daughter’s feelings.

The way Yainky’s mother was involved in the bedroom and checked out Esty at the supermarket, and the way Esty’s family spoke to her in such a mean and demeaning manner- especially when she is told the only thing she needs to do is have a baby—is not fairly portrayed. It just isn’t. There are so many details that are off. And yet, there were many details that are right, for instance, a woman is not allowed to sing in front of men in the ultra-orthodox community. People don’t carry on the Sabbath if an Eiruv is down. In the Chasidic world, girls do marry at 19 and may meet their future husband only one or two times before engagement. So it is not that the whole show is wrong, it is that there are details, nuances, and aspects that are wrong.

There are wonderful loving, healthy, smart, talented women in the Satmar community and of course, this point along with every scenario I just highlighted, there are exceptions to the rule. But this story, “Esty’s” story, is the exception to the rule, not the rule. It is unfair to state that this show is the community.

I will reiterate, I do not agree with much of the ultra-Chassidic lifestyle and ways, but I live and let live! I don’t disrespect people for living differently than I do. And I still think it was a deeply moving series. But just because the film crew held the prism this certain direction under the light to show you a specific angle, please know, the prism is still beautiful.