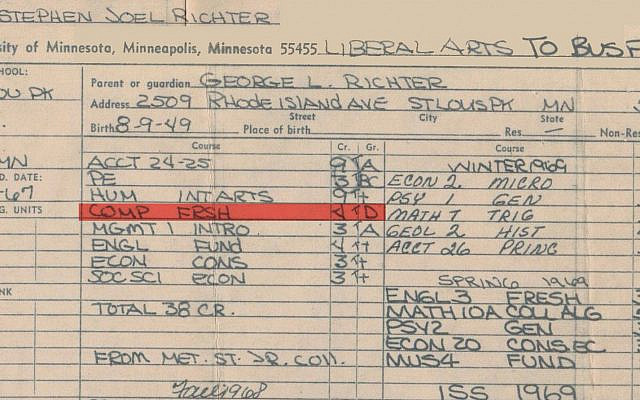 I was only 19 years old when I experienced Anti-Semitism for the first time in my classroom. That contrasts sharply with today, and the Anti-Semitism that can easily be found outside on University campus grounds in many major cities worldwide.

With Anti-Semitism increasing at an alarming rate throughout the world and on many college campuses, I thought I would share this story about one female professor who turned out to be one of the most Anti-Semitic educators I have ever met. I am not absolutely certain she had the title of professor but will refer to her as a professor for this Blog

This was at a time when NO Pro-Palestinian demonstrations occurred on campus that I knew of, but rather there were University faculty that must have clearly been pro-Palestinian or Anti-Semitic because my freshman year occurred from mid-1967 to mid-1968. Israel had been victorious during the Six Day war which could easily have influenced those faculty members against Jewish students. Add to that the rioting that took place during that time which created a recipe for anything to happen, and in this case, it seemed this professor took advantage of the situation without worrying about being punished for her actions.

I have focused on the relevant portion of my University Of Minnesota (U of M) grade transcript in the image accompanying this Blog. During that time, because my grades were only average, we were advised to attend a two-year Junior College after graduating from St. Louis Park High in June, 1967. The top courses listed on the left column are those that were transferable to the U of M and taken at Metropolitan State Junior College.

I was given early permission to transfer to the U of M as my performance was deemed satisfactory and I eventually earned a Bachelor of Science in Business Degree majoring in Accounting. That permission was no doubt given as a reward for earning an “A” for Accounting worth 9 credits and another “A” for an Introductory Management course worth an additional 3 credits. Most of the other courses were not calculated into my Grade Point Average (GPA) for my Accounting Degree from what I can remember.

That English Composition course highlighted in the color red pictured on my grade transcript was given by a professor who, at first, I thought was very fair when grading my work. But that all suddenly changed one day when she instructed all students to write a personal essay describing our families and personal experiences.

Up until that time, I had written many assignments which she marked no lower than a grade of “C”. And I fully expected that to be the case with this assignment as well. But little did I know what shocking developments lay ahead.

We handed in our papers for grading and within the next few days the professor handed them back to us. I noticed that most of my fellow students seemed satisfied with their marks and so without giving it a second thought I looked down at my paper and saw this big red “F” staring me in the face. I was in total shock and disbelief as you can imagine.

I could not understand where I had gone wrong and was determined to find out from the professor the reasons she decided to grade my paper “F”. It seemed she knew I was going to approach her about this failing grade and she was absolutely right. I did not hesitate to request a meeting with her immediately after class.

I explained that I was disappointed with this mark and wanted to know where I went wrong. She was very evasive with her answer and despite asking her many times exactly where I went wrong, she refused to pinpoint the exact reason. She just kept on saying how disappointed she was about the quality of the work I had been producing lately, without any further explanation or advice how I should improve my performance.

The “One Word” That Changed Everything – JEW

I went home that night and reviewed that paper a number of times comparing it with previous papers to see if I could spot how my performance had deteriorated as she mentioned during our meeting. I honestly could not find any major difference in my previous work compared to that latest paper.

That really bothered me because I was taking this course to improve my writing skills and that professor was unwilling to let me know what I was doing wrong. I was indeed very puzzled and discouraged by her sudden change of attitude toward me and my writing skills.

And so I decided to go over the paper again very carefully in case I missed anything and discovered something that suddenly jumped out which most likely was the cause of her sudden attitude change.

For the first time we were asked to write about our personal lives and I had nothing to hide, including the fact that I am Jewish. I confirmed by looking on the other papers I had written that this was the first time I had mentioned I was Jewish. The professor had no other way of knowing because I was not religious and was not wearing a Kippah. There were no other Jews in that class and hardly any Jews enrolled at Metropolitan State.

I had to write a few more papers to complete the course. From what I can recall I never received a grade that accurately reflected my writing skills after that meeting with her. Needless to say, I really wanted to complain to a member of faculty but there was no one I found to talk to. I was only 19 at the time and thought this was an isolated incident. As the years went by, I realized how wrong I was.

I was very disappointed I had to go through that experience but I realized its all part of a very complicated process that G-d gives us to test our loyalty to him.

By giving me an “F” on that paper that revealed I was Jewish and a “D” for an overall semester grade, the professor implied my writing skills were very weak.

But after writing articles for leading financial publications as well as this Blog, I will let readers decide if those grades accurately reflect my writing skills today as well as during the time I attended university.