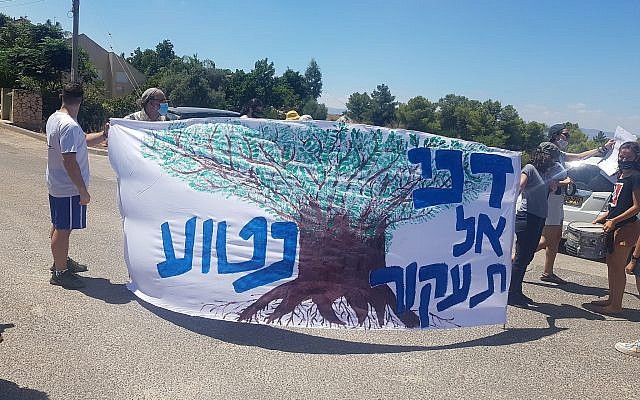 Danny, Don't Uproot What Has Been Planted

Preparing for the two hour trek to the home of KKL-JNF chairperson Danny Atar in the private gated community of Gan Ner, the verse from this week’s Torah portion (Shoftim) stood out for me, “If there is found among you, in one of the settlements which Adonai your God is giving you, a man or a woman who has affronted Adonai your God and transgressed God’s covenant…you shall make a thorough inquiry…” (Deuteronomy 17:2-4). The context is idolatry, and let it make it clear that I am in no way advocating that Danny, or any other human being, be stoned to death as is mandated for idolaters. However, while I am usually opposed not just to violence, but also to demonstrating in front of a person’s home, I make an exception when that person is responsible for administrative home demolitions, or evictions.

Sadly, the KKL-JNF, in which my own Reform Movement is also a part of the ruling coalition, has been working for thirty years to evict the Sumarin family from their home. Those of us in the Sumarin coalition have inquired, and have the documents laying out how they conspired with the settler group “Elad” dedicating to “Judaize” East Jerusalem, bore false witness claiming the home was abandoned, and convinced the State to abuse the “Absentee  Property Law” to seize the Sumarin home.  The Custodian For Abandoned  property testified before the Knesset Comptroller’s Committee that he didn’t inquire when told that a property was abandoned.  The idolatry here is worshiping the Land of Israel and the Jewish People over the Image of God in every human being.  While the actions of the  KKL-JNF do not constitute murder, one test in our Torah portion for whether a person is an accidental killer who can flee to a City of Refuge, or an intentional murderer, is whether or not the killer lay in wait, set upon him, and struck an intentional fatal blow. (19:11)  Elad, the KKL-JNF and the Custodian planned and lay in wait to strike the Sumarin family.

Danny Atar came out swinging.  He accused us of not having ever spoken to him, as if that justified everything the KKL-JNF has done.   He refused to say a word about what his responsibility was, or what he could still do to prevent this terrible human tragedy.  I reminded him that, even if I had not spoken with him personally, I have been speaking with senior KKL-JNF officials for almost 10 years about this family, some of whom have been speaking with him since he assumed his position.

So, on Rosh Khodesh Elul (The first day of the Jewish month of Elul) that begins the countdown to the High Holy Days and the time when we make a special effort to examine our actions, Danny caused me to engage in kheshbon nefesh (soul searching). I told him that my kheshbon nefesh is that perhaps I have spent too much time talking. I deeply believe in talking, and trying to come to agreed upon solutions. However, the letter writing campaigns and other actions we have taken over the years have accomplished more than talking.  Even if we never should give up on talking, we shouldn’t put all of our trust in talking.

Danny also said that we had to respect court decisions, as the KKL-JNF was doing. He didn’t address the fact that the issue is only in court because the KKL lay in wait and bore false witness against the family. We reminded him that there have been so many opportunities in which the KKL-JNF could have practiced “shev v’al ta’aseh.” However, they, in conjunction with Elad, have been relentless pursuers, aggressively appealing every decision that has gone against them.

I know that there is much disagreement what justice is. Yet, there is no way I can reconcile the actions of the KKL-JNF, Elad and the State with the command at the outset of our portion, “Justice, justice shall you pursue” (16:20). Parashat Shoftim is always my opportunity to remember my rabbi, teacher, friend and founder of Rabbis For Human Rights, Rabbi David Forman z”l.  He loved to quote this verse and the various explanations of why the word “justice” is repeated twice. He particularly favored the interpretation that we must only pursue justice through just means.  In addition to all of the traditional explanations, I add “justice twice — justice for Jews, and justice for non-Jews.” We are all human beings.

One of the hashtags of our campaign on behalf of the Sumarin family is “ #JNFDontUproot ,” and we carried a banner today playing on the image of the KKL-JNF and a well-known Israeli song, by calling on Danny not to “uproot what has been planted.”  Towards the end of our portion, we are famously taught that we must not cut down fruit trees when we lay siege to a city, because we rely on those trees to sustain us and “Are trees of the field human to withdraw before you?”  This is in line with the interpretation of Rashi, and many others. A tree is not a human being. Ibn Ezra says that the way to understand this is that the tree is life for the human being because we eat from them. However, another well-known Israeli song based on the poem of Natan Zach on this verse says that the human being actually is like a tree.

Yes, the Torah teaches us that we must have concern for trees, and not just for human beings. However, it is also true that the KKL-JNF, with its great love for trees, and its mandate to work on behalf of the Jewish people, must not show love only for trees, or only for the Jewish people. They must show great love for all people, both Jews and non-Jews. Just as it is forbidden to cut down or uproot a fruit tree, it is forbidden to unjustly uproot human beings.