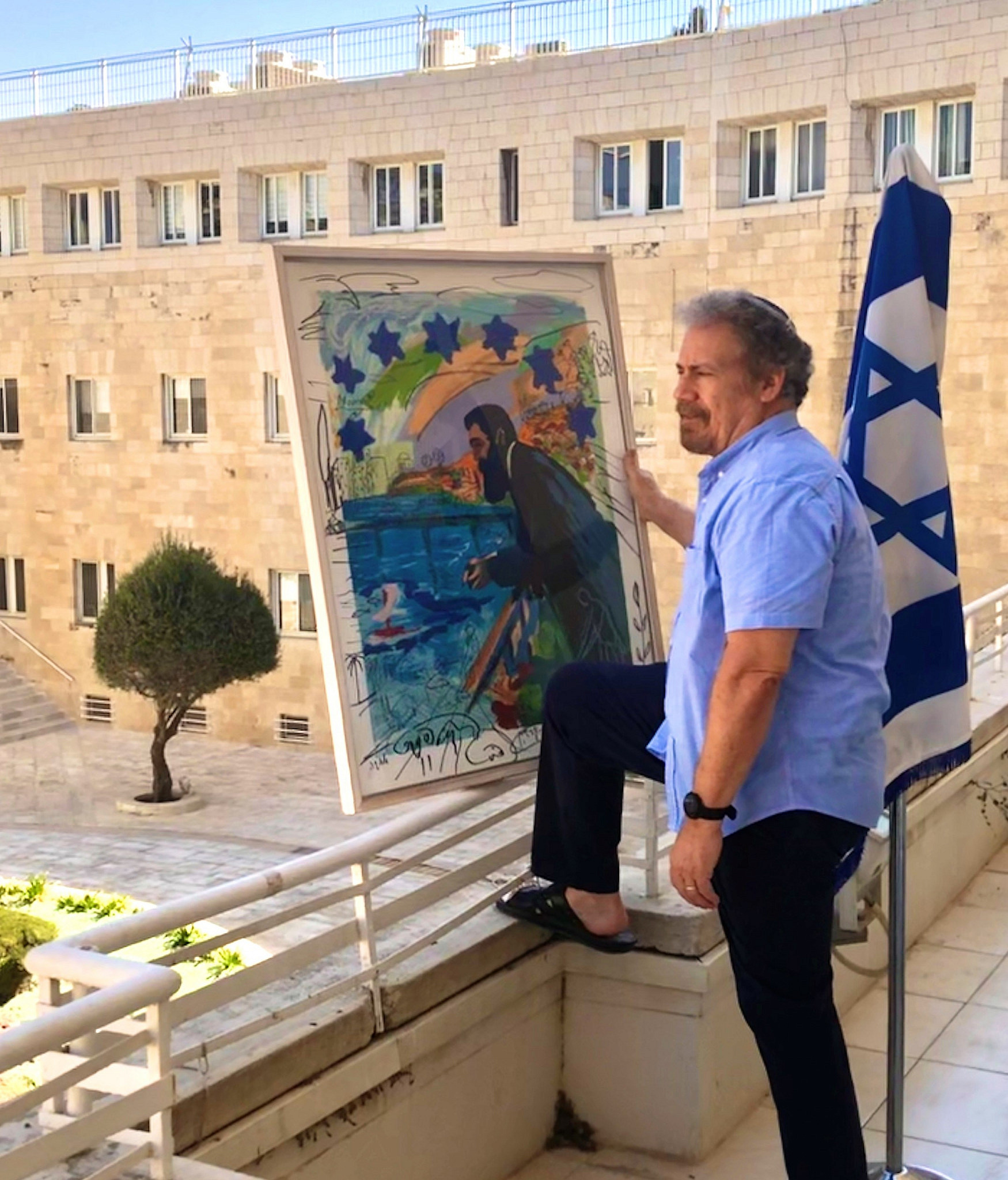 The view from above. The author, deputy chair of The Jewish Agency executive, pictured with the two balconies that offer him continuous inspiration: Herzl’s, evoking the lofty ideals of the Zionist venture, and the other, on the façade of the National Institutions, recalling the resolve of the movement’s leaders in meeting ever-evolving challenges confronting the Jewish people. (courtesy)

Most of what’s appeared in the media leading up to the Zionist Congress convening this week has to do with the intrigue of negotiations revolving around the array of personalities vying for the much sought-after positions up for grabs in the National Institutions (Jewish Agency, World Zionist Organization, Keren Kayemeth/Jewish National Fund and Keren Hayesod). That’s to be expected. Afterall, those getting the jobs are going to inherit upwards of four billion dollars of the Jewish people’s money to spend over the next five years. Who could blame them?

I would like to believe, though, that once the wrangling over posts is over and done with, those assuming them – and you, the delegates to this august gathering – will put the squabbling aside and collectively address the real reason for our coming together.

To get us started, I’ve put together my very own Zionist A-list. It’s not a “who’s who” of WZO celebs and the allegations and denunciations regarding them that are being bandied about, but rather a “what’s what” regarding the Zionist agenda that we need to be dealing with – not just during the three days of the 38th Zionist Congress, but for the next five years leading up to the 39th. Here, then, are my top ten ‘A’ words we should be talking about:

Apathy – The ever-growing indifference to one’s Jewish origin on the part of the next generation, exacerbated by  – or the result of? – far too many having barely a rudimentary knowledge of their heritage, is perhaps the greatest threat to Jewish continuity. The National Institutions, even if not directly responsible for the entirety of Jewish education, need serve as an effective lobby for broadening and bolstering its reach.

Assimilation – Apathy, of course, leads to assimilation. According to the latest Pew study of Jewish Americans, only 68% of Jewish millennials identify themselves as Jews by religion, compared to some 90% of those aged 65 and older. This need be disconcerting even for those who consider themselves ethnic, cultural or humanistic Jews, as a full two-thirds of the third who do not identify religiously, state unequivocally that they are not raising their children as Jews of any sort.

Abandonment – Not surprisingly, the estrangement from Judaism has led to a marked decrease in Jewish institutional affiliation. Young Jewish adults, fiercely independent and eschewing labels, have not joined synagogues or Jewish organizations and Federations as did their parents. This phenomenon has been aggravated by the Covid-19 pandemic. Not only has the economic hardship its brought on made it more difficult for many to pay membership fees, but Zoom-facilitated Jewish engagement has, for many, obviated the need to actually “belong.” Facilitating new ways of connecting to the Jewish collective has to be a priority.

Alienation – It’s not just the Jewish communal infrastructure that young Jews are abandoning, but Israel as well. More than half of the next generation in the United States feel uncomfortable with the very idea of a Jewish state and are seven times more likely to feel alienated from it than those over 65. To those who recognize the Six Day War only as “the beginning of the occupation,” it must be explained that what Zionism has really always been about is the creation of an exemplary society. Then they need be extended an invitation to join in the complex task of state-building, even from afar..

Anti-Israel activism – I see in the BDS movement a serious danger. It’s not the direct impact on Israel of the unwarranted vilification that worries me, but rather the first casualties to be felled by such campaigning: young Jews around the world lured into a web of fabrications and false representation of intersectionality. See Alienation, above. Those on college campuses still prepared to resist the assault must be better equipped to defend themselves and champion Israel to others.

Anti-Semitism – Who could have imagined 75 years after the Holocaust that a recent survey would reveal that 80% of Europe’s young Jews had experienced anti-Semitic harassment over the past year alone. This scourge of hatred, of course, is on the rise around the world, and the safety of Jews everywhere, as well as their sense of well-being, must be another of our concerns.

Antipathy/Acrimony/Antagonism – As if fending off attacks from without weren’t enough to occupy us, the ferocity and depth of the hostility between diverse sectors of the Jewish people has reached perilous proportions. Let’s not kid ourselves; it’s been a very long time since any of us could wholeheartedly proclaim “we are one.” Unfortunately, this discord has now penetrated the WZO, the very organ that we proudly proclaim to be a steadfast bastion of Jewish unity. To preserve their legitimacy, the National Institutions must serve as an example of inclusiveness for the entirety of the multi-faceted Jewish people by ensuring that portfolios and resources are shared equitably. Whether or not that will happen this week is entirely in your hands.

Aliyah – In the meantime, back to our agenda. I once penned an article, “Teaching Israel from B to Y: An incomplete guide for the Jewish Educator.” My contention was – and remains – that Israel education generally extends from ‘B’ for Birthright to ‘Y’ for Yerushalayim Shel Zahav, with ‘A’ and ‘Z’ –  standing respectively for Aliyah and Zionism – conspicuously absent from the curriculum. Mine isn’t a plea to indoctrinate our young people to move to Israel; it is, however, an appeal to pose the option, and to present it in the context of Zionist thought as the highest expression of its fulfillment. My argument is that not moving to Israel should be a conscious decision, not an unchallenged default.

Anyone who takes what we are doing seriously will readily concede that addressing this Zionist A-list is an intimidating challenge. So a word of encouragement as you, the delegates to the 38th Zionist Congress, face the daunting task of ensuring that this gathering will be recalled in the future as one that made a difference.

To that end, I invite you to join me on the two balconies that I have often ambled onto for inspiration. The first is the one in the iconic picture of Herzl gazing out towards the future, reminding me of the dreams, vision and lofty aspirations of the Zionist venture. The second is the one my office in the building of the National Institutions has opened on to for the past 20 years and on which the leadership of Israel’s government-in-the-making gathered on November 29, 1947 (Kaf-tet b’November), as the U.N. voted in favor of the establishment of a Jewish state. While these leaders of the Zionist enterprise were as elated as the jubilant crowds dancing below them, they were also full of trepidation, acutely aware of the imminent challenges on the horizon and the huge responsibility they bore in overcoming them. My advice? Keep one foot perched on each, trying all the while not to lose your balance.

About the Author
Dr. David Breakstone is the deputy chairman of the executive of The Jewish Agency for Israel and the conceptual architect and founding director of the World Zionist Organization's Herzl Museum and Educational Center in Jerusalem. The opinions expressed herein are entirely his own.
Related Topics
Related Posts
Comments