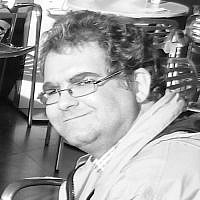 The Blogs
Jens Nitschkowski
Apply for a Blog
Please note that the posts on The Blogs are contributed by third parties. The opinions, facts and any media content in them are presented solely by the authors, and neither The Times of Israel nor its partners assume any responsibility for them. Please contact us in case of abuse. In case of abuse,
Report this post.

When somebody learns Hebrew, the question arises why she or he devotes so much time to a language spoken by only about 9 millions of humans. Would it not be better to learn Spanish or Chinese? Perhaps it would. But sometimes there is a biographical destiny who leads automatically to a particular action. This is what has happened to the author of these lines guided slowly but surely to the Hebrew language and to Jewish culture.

My way to Eretz Israel

The beginning was marked by my lessons in Christian religion. There I learned the history of Moses and the people of Israel as described in the book Shmot (שמות). To me, everything was very fascinating and, very often, I thought about the situation of the Israelites in the desert.

Later on, I also learned about the “Kristallnacht” and the Shoah in the history lessons. It was (and it is still) impossible for me to understand that the Jews were killed only for being Jews. Why, for example, Anne Frank, a schoolgirl who could have been my classmate, was persecuted? What has she done? All that was so monstrous, that very early I considered Hitler and his accomplices as the worst kind of criminals.  Of course, I also heard arguments of defense that ”not everything was bad under Adolf” or that “the workers had their best life under Adolf” as my grandmother always said. But knowing about the Shoah I considered the whole period of the III. Reich as diabolic.

On the other hand, Israeli culture and Jewish humor made my life more cheerful. For example, I enjoyed the stories of Ephraim Kishon. And, at the age of 13, in 1979, I fell in to love to a young Israeli female singer, who was no other than Gali Atari who has just won the “Grand Prix Eurovision de la Chanson” (which was the name of the ESC at this epoch).  Up to now, her “Hallelujah” belongs to my most favorite songs. About 5 years later, the same happened to me with  Ofra Haza s’’l, and her אם ננעלו  At this very moment, for the first time, I felt the desire to understand Hebrew, to understand what she sang. Furthermore, to me Hebrew was (and is) also a religious language which intensified this desire. But in the 80’s, I was completely absorbed by my studies in physics and in mathematics, so there was no time to learn Hebrew.

Then, when in 1995 Yitzchak Rabin was murdered, I felt a shock, even if I didn’t notice in detail the peace process named Oslo. But I was convinced that, from now on, peace between Jews and Arabs would be much more difficult.

After that, for about 20 years, I wasn’t interested, neither in Israel nor in Jewish culture because of personal reasons. But when, in November 2015, I was with my catholic parish for the first time in Israel, I get what I would call an “intellectual flash”: Suddenly, during a trip to kibbutz Ginossar, when I took my place in our bus, the old desire to learn Hebrew broke through my thoughts and occupied me. This desire was intensified by my German history, because I’m convinced that Germany, and that means the Germans, should always stand at the side of Israel.

So, after my return to Germany, I bought some textbooks on Hebrew and I began to study them. This was in November 2015 and up to now, I still learn Hebrew with great pleasure.  These studies give me mental satisfaction and I also have the impression that I’m now more “complete”. So my way to Hebrew was also a way to more happiness!

My life with Israel

And today? Today, of course, I still learn Hebrew. But now I’m able to read small texts, extracts from the TaNaKh or from the Fathers (פרקי אבות) and even simple, but nevertheless beautiful, poems like those of Leah Goldberg, for example. All that give me a lot of contentedness.

Of course, I also use my Hebrew to understand Israeli politics, because I want to explain to my family and my friends what’s really happening in Israel and how Israeli politics works. This is really necessary, because German newspapers and broadcasts give always incomplete information in which only Israel is accused to cause all the harm in the Israeli-Arab-conflict. In general, the Palestinian part is played down or even left out. So with my explanations I hope that that I can contribute at least a little bit to a better understanding of the situation in Israel. And thanks to my interest in Israeli politics, I have discovered a variety of interesting politicians, for example the courageous and strong-willed Stav Shaffir (which I really would like to meet…).

Voilà, that’s the way who guided the child I was in the 70’s to Eretz Jisrael and to Hebrew language and Jewish culture. It’s a way paved with cultural and religious curiosity and also with a feeling of responsibility for the Jewish people (עם ישראל).

In addition to that I finished my studies in physics and today I work in a research institute, belonging to the Fraunhofer Society, on radar technologies. So I would feel very grateful and happy, if it would be possible to combine these two activities, perhaps in connection with the IDF, for which I have a great esteem, so that, finally, I could participate in the intensification of the relation between Israel and Germany.

About the Author
Jens Nitschkowski is a german theoretical physicist who is also interested in Jewish culture and religion, Israeli history and Hebrew language. Learning Hebrew since 2015, he observes with increasing interest what happens in Israel and in the Jewish world.
Comments