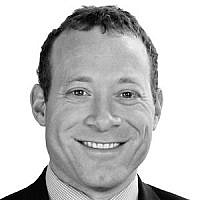 The Blogs
Josh Gottheimer
Apply for a Blog
Please note that the posts on The Blogs are contributed by third parties. The opinions, facts and any media content in them are presented solely by the authors, and neither The Times of Israel nor its partners assume any responsibility for them. Please contact us in case of abuse. In case of abuse,
Report this post.

A Look at the Shortcomings in the Iran Deal

Over the last several years of U.S.-Iran negotiations, a hopeful chorus developed among those who believed peace was on the horizon.

Indeed, the announced agreement was the culmination of the Obama administration’s increased engagement, sustained strategy, and tireless diplomatic efforts. The prospect of a deal brought hope of real and lasting change, halting Iranian nuclear weapons development, advancing our national security interests, and protecting our Israeli, European, and Gulf state allies.

But after meticulously reading the proposed accord and hearing all sides of the arguments, even some peace process promoters find themselves in the uncomfortable position of having to oppose it. Respect for the efforts of the negotiating team does not overcome the conclusion that this is not a deal that’s in the best interest of the United States or our allies in the region. It lacks sufficient safeguards to address the clear risks associated with the agreement. We can — and we must — do better.

The core of my concern is that the deal will not preclude Iran from developing a nuclear weapon. At best, it pushes back the date 15 years, and it does so at an enormous cost. It fails to prevent Iran’s continued participation as an active sponsor of terror globally. Moreover, the deal releases billions of dollars to the Iranian regime while lifting the United Nations embargo on conventional arms and ballistic missiles. Simultaneously providing Iran with the greater wealth and access to weapons stokes the risk of a regional arms race and increased terrorist activity. In the end, if a nuclear Iran emerges, it would likely be an economic and military superpower in the region — and one that could be nearly impossible to stop.

A series of mischaracterizations have developed around the deal.

Myth 1: Iran will not get a nuclear weapon.

Reality: Iran has been given the legitimate right to enrich uranium without being required to permanently dismantle either its plutonium or its uranium facilities. Within the time frame of the deal, the regime is permitted to move forward with research and development, and at the end of 15 years, the regime will have several pathways to develop a nuclear weapon. And that’s if it doesn’t cheat. Given Iran’s history of deceit, including repeatedly to the IAEA, we have no reason to believe it will be honest.

Myth 2: If the deal fails, Iran will be left to operate without any economic sanctions.

Reality: If the deal falls through, the current economic sanctions will stay in place. It has been argued that the international community will balk and the sanctions regime will fall apart. But the truth is that it’s up to the United States to keep the sanctions in place and maintain international support. And even if some countries walk, we can impose sanctions, unilaterally if necessary. Also, let’s not forget that the current economic sanctions have been incredibly effective. The Iranian stock economy has been in a deep recession, thanks to the sanctions, and the Iranian stock market has been cut in half.

Myth 3: This deal puts in place the most intrusive inspections possible.

Reality: We will have intrusive inspections in place, but only at certain sites. Instead of inspectors having unimpeded anytime anywhere access to the other critical suspect sites, under the agreement Iran has the right to prevent international inspectors from gaining access to any nuclear site. This refusal is followed by a committee review process — note that Iran sits on that committee — that can take up to 24 days, giving Iran sufficient time to sanitize its facilities.   Additionally, the deal does not require Iran to fully disclose its previous nuclear activity to the International Atomic Energy Agency’s satisfaction before sanction relief is provided. And the deal fails to lay out clear accountability measures regarding punishment for minor violations, basically baiting Iran to cheat.

Myth 4: The choice is this deal or war.

Reality: Not true. The alternative to this insufficient deal is a better deal. Should this deal go through, it is certain that billions of dollars will be pumped into a regime that is the world’s greatest sponsor of terrorism. It is certain that ayatollahs will gain some measure of international legitimacy, that a nefarious leadership will be emboldened, and that their mullahcracy will be preserved. It is certain that Iran will be a nuclear threshold state, the very nightmare this deal was initially sought to prevent. In fact, under this current agreement, it is even more likely that Iran will put more money into conventional weapons and preparations for war over the next decade.

Myth 5: We can’t keep our international allies on board for more negotiations.

Reality: Altruism wasn’t the principle that brought the P5+1 to the table. National interests were. As the leading world power, the United States has the ability to give its allies the choice, as it successfully did in the past, to either do business with America or invest in Iran. I believe the administration, working closely with Congress, and in concert with our allies, can achieve lasting peace. This is not a matter of ability, but one of will. We are an essential friend to many countries, which is why our allies will be there for us if we say no to this proposal. Moreover, our allies take comfort when we reject decline, act decisively, and lead the world to safety through strength.

Myths can’t change the unfortunate reality that this deal simply is not good enough. We must oppose it so we can restart negotiations, with sufficient economic pressure to get to a better deal, one that truly ends Iran’s pathways to a nuclear weapon.

Ultimately, I believe that diplomacy, including tough and enduring sanctions, is the best option for getting us to a better place — a place where Israel and our regional allies’ security is ensured and the world made a safer place. And as we work to ensure America’s security — and the world’s — let’s not forget that we are the most powerful nation in the world.

That’s not a myth; it’s a reality.

Josh Gottheimer lives in Wyckoff. A former speechwriter for President Bill Clinton, now an executive at Microsoft and the chair of a nonprofit called JerseyOn, he is exploring a run for Congress against Scott Garrett in New Jersey’s Fifth District.

About the Author
Josh Gottheimer lives in Wyckoff. A former speechwriter for President Bill Clinton, now an executive at Microsoft and the chair of a nonprofit called JerseyOn, he is exploring a run for Congress against Scott Garrett in New Jersey’s Fifth District.
Comments