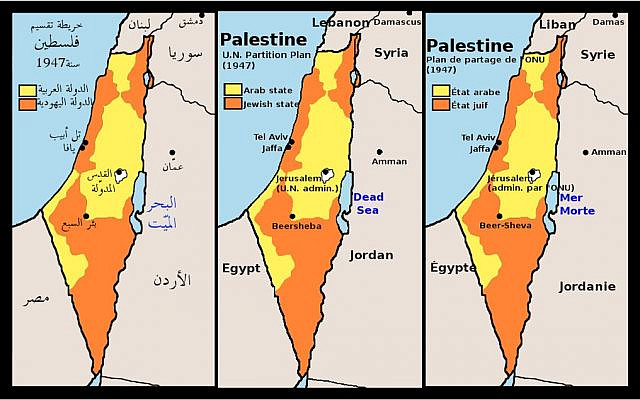 Every year on May 15, the Palestinians commemorate Nakba Day. It is no coincidence that May 15 falls one day after May 14, the day that Israel declared its independence. The Israel-Arab war of 1947/1948 in which the Arabs lost their bid to reverse Israel’s independence, was perhaps the most significant event in Palestinian history. But even though the Nakba was the direct result of the Arab rejection of the 1947 UN partition plan, one would be hard-pressed to find many Palestinians who admit that rejecting that plan was a mistake.

In a very rare instance, Palestinian Authority President Mahmood Abbas expressed such a sentiment on Israeli television in October 2011. His behavior however does not show that he learned a lesson from that mistake. He continues to incite violence against Israel, he continues to fund terrorism, and when he had an opportunity in 2008 to finally give the Palestinians a state and partly make up for the mistake of 1947, he said no. When Abbas said that rejection of the 1947 UN partition plan was a mistake, Hamas quickly accused him of begging “the occupation” and of wiping out “the historical rights” of the Palestinians.

Was it reasonable for the Palestinians to reject the plan? These are highlights of what the plan offered:

Reasons to say no

For the Jews, they would likely have wanted much more arable land to accommodate the immigrants that they knew would be coming. In the following four years alone, 688,000 Jews would immigrate into what was then named Israel. From the Arab point of view, however, the Arabs had two thirds of the population in Palestine but would be getting substantially less than two thirds of the land.

For the Jews, unless most Arabs residing in the Jewish state opted for Arab citizenship, the Jewish state would only have a slight Jewish majority, with the consequence that making decisions for the benefit for the Jews (such as continued immigration of Jews into Palestine) would be difficult. For the Arabs, the plan meant that almost one third of the Arabs would be living under majority Jewish rule unless they moved to the Arab state.

For both Arab and Jews, their state would not be as independent as a typical state since it would be part of an economic union in which many critical decisions would be made at the union level in which both Arab and Jewish representation would be in the minority.

For both Jews and Arabs, however, there were also strong reasons to accept the plan.

For the Jews, considering their minority status in the Middle East, if they rejected the plan, there may be no other opportunity for autonomy. For the Arabs, rejecting the plan would have likely appeared to be less of a gamble but still a gamble.

The plan provided a peaceful way forward and a reasonable framework that could lead to a successful federation.

Access to their religious sites would be guaranteed for both Arabs and Jews.

The economic union would have strong similarities with federations elsewhere in the world, including the United States, Canada, and Australia, therefore in many ways, the Jews and the Arabs would be living in a single country.

If the new federation was a success, it would benefit both Jews and Arabs.

From a less selfish point of view, for the Arabs, the plan provided a lifeline to their follow Palestinians, the Palestinian Jews, since many Jews were still trying to flee Europe which had just murdered six million of them, and by limiting Jewish immigration to the Jewish state, the plan allowed the Palestinian Arabs to help the Jews while at the same time limiting any direct impact on them.

A decision rooted in ignorance of history

As we know, the Jews accepted the plan whereas the Arabs rejected it. In other words, the Jews chose compromise, and the Arabs gambled on war. As a result of the Arabs’ decision, the Palestinian Arabs lost a golden opportunity for autonomy at an equal status with the Palestinian Jews, and thousands of Arabs and Jews were killed while hundreds of thousands of Arabs and Jews became refugees.

Whether the Arabs’ rejection of the UN partition plan was due to antisemitism, greed, or anything else, it certainly was not driven by understanding of Jewish history. In calculations of Jewish population versus Arab population, the Arabs did not account for the Jews who needed to return home, even though the Holocaust that ended three years earlier would have made that fact obvious. If the Arabs had accounted for that, all other points being considered, the UN partition plan (which essentially consisted of one Arab state and one binational state) would have appeared much more beneficial to them than to the Jews.

Even today, however, there is little Palestinian recognition of Jewish history. As recently as four years ago, Abbas stated that Israel is “a colonial project that has nothing to do with Judaism”.

The fact that Abbas recognizes that the Arabs made a mistake by rejecting the 1947 UN partition plan seems to be in contradiction with the fact that he does not recognize Jewish history, but I don’t believe that it is a contradiction. It simply means that Abbas sees the Arab rejection of the 1947 UN partition plan as a tactical mistake, but he still does not think that it would have been the historically correct decision. In other words, Abbas’ ideology does not differ from Hamas’ ideology except in terms of tactics.

If the Palestinian leadership continues to reject the facts of history, they will likely continue to reject solutions that allow their people to have a state, because they do not accept that a Jewish state has any historical right to exist next to a Palestinian state. They believe that agreeing to any solution that doesn’t involve the destruction of Israel is a hugely unfair compromise, and for anyone, that is a very difficult compromise to accept.