In cities around the world, anti-Israel protesters commemorate Al-Nakba Day on May 15. “Nakba” is Arabic for “catastrophe.” This is the day on which the Jewish state, Israel, was re-established in 1948, as recommended by the UN resolution to partition Palestine into two states, one Jewish and one Arab. Instead of establishing an Arab state, the armies of five Arab states (Egypt, Syria, Iraq, Jordan, and Lebanon) invaded the country to obliterate the nascent Jewish state and grab as much territory as possible. It is the Arab failure to destroy Israel at birth that is commemorated on Al-Nakba Day.

In Sydney, several hundred protesters gathered outside the Town Hall on Sunday to “commemorate 68 years since the Nakba (catastrophe) befell not only Palestinians but humanity as a whole.” These are the words of Palestine Action Group (PAG), the organisers of the rally. Apparently, PAG consider it a catastrophe for “humanity as a whole” that a tiny Jewish state was founded on the same land where previous Jewish states had existed, and where Jews, who are indigenous to the land, have continuously lived for more than 3,500 years.

Mona Abu Zalaf, the MC, began the speeches by making the bizarre accusation that Israel has “Judaised our villages, our culture, our land.” Several other speakers followed, including from the Maritime Union of Australia.

Rhiannon’s words lay bare her real agenda. By referring to the Nakba as the “great crime of the 20th century” Rhiannon was proclaiming that the suffering and deaths in the Armenian genocide, the Nazi genocide of Jews, the Pol Pot genocide of Cambodians, the Rwandan genocide, the massacres of Muslims in Bosnia, and other mass killings are less important than the deaths of about 7,000 Arabs in the Arab-initiated war in 1948, a war in which 6,000 Jews were also killed.

By calling the “Nakba” the “great crime of the 21st century,” Rhiannon relegated the suffering and deaths from the wars in Iraq and Afghanistan, the Syrian civil war with over 250,000 deaths and more than 2 million refugees to a lesser status than the concerns of the Palestinians.

By stating that Israel’s “occupation” started in 1948, Rhiannon was saying that Israel itself is occupied territory, not just the territories Israel captured in the Arab-initiated war in 1967. By this statement, Rhiannon is denying the legitimacy of Israel and Israel’s right to exist.

Rhiannon then spoke of the situation in Lebanon for Palestinians. She decried that “there are 1.5 million Palestinians in refugee camps in Lebanon. They are not allowed to work, not allowed to build, have no electricity, have no water. They are living under the most appalling situation because Israel dispossessed them.” What she failed to mention is that these restrictions and conditions are imposed on the Palestinians living there by the Lebanese government under Lebanese law.

It is Lebanon, not Israel, that enacted the official discriminatory laws against Palestinian refugees and their Lebanese-born descendants, including the severely restricted rights in the areas of work, education, housing and health services. For example, Lebanese law has prohibited Palestinians from working in more than 70 types of jobs, including professional, mercantile and administrative, although in 2005, the law reduced those bans to 20 types of jobs. Yet to Rhiannon, Israel is to be blamed for how the Lebanese treat their fellow Arabs, the Palestinians.

Peter Slezak also addressed the crowd, proclaiming: “I represent APAN, the ‘Australia Palestine Advocacy Network,’ the largest umbrella group for Palestine in Australia.” He encouraged protesters to take part in APAN’s campaign to lobby federal MPs to support Palestine, and drew attention to the “I support Palestine & I Vote” stickers being distributed to the crowd. Slezak proudly announced that “APAN has now come out in support of BDS.”

The BDS (Boycott, Divestment Sanctions) campaign has as its aim the elimination of the State of Israel. BDS* is ostensibly focused on economic measures, however, its true and unstated aim is to delegitimize Israel — the nation State of the Jewish people — and to make Israel a pariah state, just as Jews were once a pariah people. Terms like “racist,” “ethnic cleansing,” “apartheid,” “war crimes,” and “genocide” are regularly deployed by the BDS campaign to falsely attribute those traits to Israel. BDS is another weapon in the long war against Israel. BDS is waged as a war of narratives and propaganda, rather than of economics.

APAN’s adoption of BDS indicates how the lobby group has abandoned its previous non-committal stance on whether it supports a one or two state solution to the Arab-Israel conflict, and has embraced the extremist position that works towards isolating, demonizing and eliminating the only Jewish state in the world. They do this ostensibly in order to create the 23rd Arab state in the world.

Chants abounded at the rally and the march from those supporting the destruction of Israel with the slogan “From the river to the sea, Palestine will be free” to those supporting violence against Israeli Jews with “Israel out of Gaza, intifada, intifada” and “Resistance is justified, when Palestine is occupied.” Translation: Violence is justified against the whole of Israel.

Banners and placards included the text of “End 68 yrs of occupation. Support BDS!” implying opposition to Israel’s right to exist; “Google: Rothschild Zionism!” espousing anti-Semitic conspiracy theories; and “One Holocaust doesn’t justify another” comparing the Nazi genocide of six million Jews with the Arab-Israel conflict which is one of the least deadly of the world’s international conflicts. The message is a false analogy aimed at demonizing Jews, by minimizing the evil of the deliberate and planned mass extermination of six million Jews by the Nazis, and in turn retrospectively justifying the Holocaust against the Jewish people. Other banners and placards had references accusing Israel of ethnic cleansing, war crimes, apartheid, and targeting children.

The political organisations flying their colors at the anti-Israel protest were the red flag of the Communist Party of Australia, Maritime Union of Australia, Socialist Alternative, Socialist Alliance, The Greens, and Students for Palestine at Sydney University. This year, there were no Hezbollah, Hamas, or Shahadah flags, as at previous anti-Israel protests. Although people dressed in traditional Muslim garb comprised 80% of the protesters, the slogans on the banners were extreme Left rather than Islamist.

Al-Nakba Day commemorates and bemoans the existence of a Jewish state in part of the Jewish national homeland. Proponents talk of occupation and ethnic cleansing.

While the partition of India into Hindu India and Muslim Pakistan in 1947 resulted in 12 million refugees and up to 2 million deaths, no one calls for the destruction of Pakistan. While China occupies Tibet, Turkey occupies Cyprus, Morocco occupies Western Sahara, Indonesia occupies West Papua, and many other occupations continue, only Israel (whose occupation of the West Bank and Gaza occurred in a defensive war in 1967) elicits international protests and a BDS campaign.

Al-Nakba Day proponents’ choice of Israel’s independence date is significant. It signifies their opposition to a Jewish state in Palestine. It is not in support of an Arab state in Palestine, unless it is established on the ashes of Israel. Al-Nakba Day is not about empowering Palestinians to create a state next to Israel. Al-Nakba Day is about demonizing Israel and opposing Israel’s existence. Proponents seek to blame Israel solely for the situation the Palestinians are in — the refugees from the 1948 and 1967 wars and the absence of a Palestinian Arab state.

When al-Nakba Day proponents accuse Israel of ethnic cleansing, they never mention the fact that while some 160,000 Arabs chose to remain in Israel, all Jews in the Arab controlled territory of Gaza and the West Bank were either killed or fled to Israel. That is ethnic cleansing. No Jew could remain. In addition, 850,000 Jews were expelled or fled from Arab countries, from 1941 onwards, with many settling in Israel. Most of the Arab world became Judenfrei (free of Jews).

Anti-Israel activists are free to organize and attend al-Nakba Day protests. The Palestinian Arabs have indeed suffered over many years. They have suffered at the hands of their own leadership in the past and the present, at the hands of Arab countries which took them in, but have treated them abominably and refused to integrate them, and at the hands of the UN, which has kept them as refugees. However, al-Nakba Day is not about pursuing a state for Palestinian Arabs. It is about pursuing the destruction of the one Jewish state in the world.

* See Inside BDS for a comprehensive document on the origins and development of BDS, its tactics, strategy, and aims. 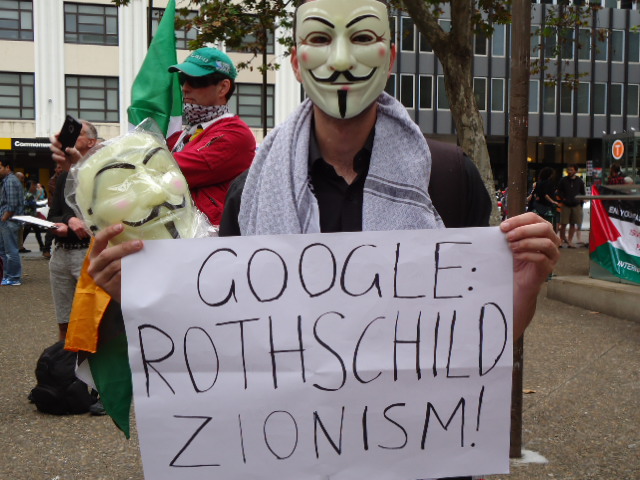 Anti-Semitic placard at the Nakba Day protest, Sydney, 15 May 2016 (Courtesy)