The Blogs
Bat-Zion Susskind-Sacks
Apply for a Blog
Please note that the posts on The Blogs are contributed by third parties. The opinions, facts and any media content in them are presented solely by the authors, and neither The Times of Israel nor its partners assume any responsibility for them. Please contact us in case of abuse. In case of abuse,
Report this post.

Ever wondered why the Arab propaganda machine spends millions on efforts to demonize and dehumanize Israel?

I believe a brief comparison between two doctrines, Nazism and Arabism, not far apart on the timeline of history and at one stage even overlapping, can help answer this question or at least part of it.

Like Nazism, Arabism and its collaborators are engaging in a modern day version of the “Final Solution” to the Jewish “problem.” They use the same propaganda methods. Both rely heavily on built in anti-Semitism in Western culture. They had a tradition, conveyed by 1800 years of religious based discrimination, on which to build, changing terms to fit new conditions of a new era, but repeating the old clichés that were used to demonize Jews, and now the State of Israel, the Jewish state.,

In order to justify ridding the world of Jews, Nazism developed a very sophisticated pseudo -scientific system of demonizing the Jews (physically, morally and spiritually). A being, a creature, that looked and possessed such physical imperfections, a parasite that lived of and thrived of the non Jewish society it lived in such as the Jew, had no place in a world striving towards perfection.

Once demonized, Nazism proceeded to dehumanize the Jews. By putting them into camps, forcing them to live in subhuman conditions, forcing them many times to resort to immoral practices and means of survival dictated by humans’ animalistic instincts for survival, Jews and other undesirables were reduced to the levels of the animal world. And who will stand up to hunting down animals in those days? Anything is possible and allowed to do when it comes to animals, including death. After all, they no longer possess human and humane traits. Dehumanizing some humans, legitimizes ridding the world of them.

Nazism and Arabism, however, face the same problem. The end of the Jews, unlike the belief of some, like  Arnold Toynbee, a celebrated British Historian claimed, would not go unnoticed. Neither Nazism nor Arabism could just erase a whole culture and a people that contributed greatly to European civilization, in particular and world civilization in general. The Jews were and still are too visible, too valued in the eyes of many.
And if Nazism had a problem, then Arabism and its supporters have a bigger one!

Nowadays, the Jews have a state. Israel, the Home of the Jewish people is a strong independent nation, one that thrives, succeeds, grows and continues to grow and contribute to the world. The gifts of the Jews are by no means shabby in a world that functions with the help and support of many of their inventions. For modern day Israelis, many of whom are second and third generation of Shoa survivors, the memories and trauma of the horrors of that dark chapter in Jewish and human history are still strong.

Another problem facing Arabism is that unlike eighty years ago, the Jews are not alone anymore. Jews and the friends of the Jewish state are fighting back and fighting back with might. The younger Israeli generation, raised on the pillars of Zionism, is infused with the defiant spirit of the ancient Maccabees and other heroes in Jewish history. These young people realize that the propaganda war facing Israel is not an easy one but the small battles that are won prove to them that their hard work and efforts are beginning to bear fruit.

Arabism knows it. It understands that this is the reason why Its “Final Solution” plan is moving at a much slower pace than that of its Nazi mentors.

In a desperate effort to win their propaganda war, Arabism continues to enlist the nefarious methods of spreading lies, half truths and disinformation. It has developed a “narrative” –  its version of middle east history, where facts are twisted and any similarity between them and reality is merely co-incidental. Unfortunately, as during Nazism, a slumbering world does very little to challenge it.

Since we already know what the propaganda of Nazism materialized into, is the world going to sit quietly and watch Arabism perform the same show again? Perhaps.  Whatever happens, those in the Arab world that prescribe to the doctrine of Arabism will have to continue to pour many more millions into the void because when the Jews say “Never Again” they mean it and now more than ever.

About the Author
Bat-Zion Susskind-Sacks is an English teacher and a pro Israel advocate. She lives in Israel and has recently published her first novel, "On A Wing From The Holy Land." www.bat-zion.name
Comments 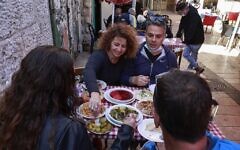