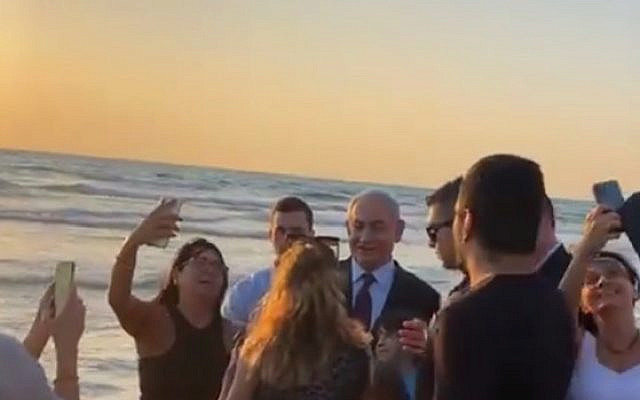 Former prime minister and now opposition leader Binyamin Netanyahu, finally moved out of the official “residence” on Balfour Street in Jerusalem last Saturday night. It had been four weeks (up until last Saturday night) since the new “change” government was sworn in 60 to 59 with one Arab Ra’am MK abstaining. But as it was not even clear whether the change bloc would receive a Knesset majority on Sunday 13 June, the Netanyahu’s made no firm plans to leave the property.

In addition, the newly appointed prime minister, Naftali Bennett with only five of his six party MK’s backing him, was quite happy for the Netanyahu’s to remain at the official residence for a few weeks longer. Bennett knew that there were security concerns at Netanyahu’s Caesarea home, which needed to be addressed and the two homes in Jerusalem were also a major security problem. The security adjustments in Caesarea have now been made and the Netanyahu’s have moved.

But would you believe after all of the hate rhetoric against the Netanyahu’s for remaining in the house for an extra four weeks, Naftali Bennett has no immediate plans to move in.

His children are in local schools and he therefore wishes to remain with his family in Ra’nana. This has angered some of Bennett’s neighbours, because of the increased security in the area and the regular right-wing demonstrations taking place outside his house, which bother the neighbours.

Let’s be clear, the “crime minister black flag movement” has caused major disruption outside the Prime Minister’s residence in Rehavia for the best part of a year. They used loud hailers, blaring music and even urinated in the streets. Not to mention the rubbish left, the violence against police and the thousands of local residents who couldn’t sleep at night or walk past the demonstrators in the day.

Of course Netanyahu had to leave the official residence, he is no longer prime minister of Israel. But demonstrators, backed by much of the media used terms such as “squatting” and “shameful” referring to Netanyahu and even compared the event to “Donald Trump refusing to accept the election result”.

We were told Bennett wanted to move in and every other former Prime Minister leaves when they “loose” an election. So why can’t Netanyahu? But now we know, Bennett does not wish to move in just yet, because of his young family.

The black flag folk cried “cut the electricity” and “switch off the water” in a bid to intimidate the Netanyahu’s. But really Bibi and Sara were just waiting for security adjustments to be made to their house.

The black flag movement are now making plans to demonstrate outside the Netanyahu’s Caesarea home later this week. It’s not enough for them to see Netanyahu ousted as Prime Minister, they want to see him in jail. Elements of the left dislike Bibi so much, as far as they are concerned, he must be put behind bars.

Of course there are also those who don’t like Netanyahu on the right. MK Gideon Sa’ar for example and others from the New Hope party loath him. Mush of the media doesn’t like him. They begrudge his success. They know that it is highly unlikely, someone else will assume the position of Prime Minister for 15 years. Netanyahu has set a record which is unlikely to be broken.

But Netanyahu is no longer in power. Bennett is Prime Minister and Lapid is scheduled to take over in two years. So what’s their problem? Why are they holding on to all this hate?

I think the answer is that the Left-Centre-Right-Arab (eight party) coalition with a razor thin majority of one seat is so concerned that Bibi as opposition leader, with 30 seats accredited to the Likud party, is going to come back.

The new government know they will struggle to pass any real legislation during their term in office, because of the major differences between the coalition partners. These include security, settlements, foreign affairs, social and economic policies and so much more. The government could not even get an agreement on the citizenship law last week, which failed.

The black flag movement believe erroneously by the way, that if their anti-Netanyahu movement can keep the pressure on and the media cover the demos, then the prosecution has a bigger chance of winning in court and Netanyahu will never make a comeback, if he goes to prison.

The only problem with that scenario is that the prosecution is beginning to crack. They are struggling to find real evidence in the three cases against Netanyahu and so the prosecution requested another delay in the trial of the former Prime Minister last week.

Meanwhile the war of words between Netanyahu and Bennett in the Knesset is reaching new heights. Stay tuned.