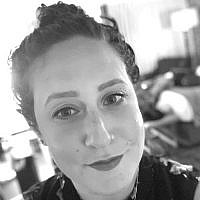 The Blogs
Valerie Berkley
Apply for a Blog
Please note that the posts on The Blogs are contributed by third parties. The opinions, facts and any media content in them are presented solely by the authors, and neither The Times of Israel nor its partners assume any responsibility for them. Please contact us in case of abuse. In case of abuse,
Report this post. 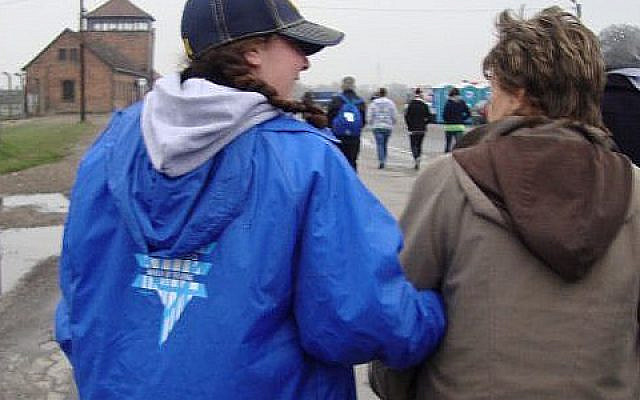 Berkley and Holocaust survivor march arm in arm from Auschwitz to Birkenau, 2010.

Yom Hashoah is Holocaust Remembrance Day. A day in which the world has an opportunity to reflect on the atrocities that took place during World War II. On this day, a siren is blasted throughout the state of Israel and for 2 minutes, the whole state is silent, reflective, and commemorative. Cars on the freeway come to a halt, transactions are paused in the market, and pedestrians stop in their tracks. It is a truly beautiful moment to witness, especially when the whole state is not stuck inside, and can pause to remember the 11 million lives lost at the hands of the Nazis in World War II. It is a day for the world to remember “never again.”

If you are anything like me during this quarantine, you have had a lot of time for television. After watching the series ‘Hunters’ (which is amazing) the reality of “Operation Paperclip” was brought to my attention. What is “Operation Paperclip?” After WWII, the US brought in over 1,000 Nazis – scientists, researchers, and officers, in order to help the US win the Space Race against the Soviet Union. These Nazis were allowed to escape prosecution and reparations that should have attempted to make up for their heinous war crimes, but instead received citizenship, a good job in America with a new identity and the freedom to start over with a new life.

This Yom Hashoah 2020, I am thinking about all of the amazing infrastructures that have been developed in the land of the free since WWII, with the help of Nazis. We have NASA, the strongest space program in the world. A US program that helped us win the Space Race, landed people on the moon, sends rovers to explore other planets and hopefully someday reach out to other lifeforms (because we know they’re out there). “Operation Paperclip” encourages us to think about what groundwork was laid in order to achieve these victories and at what cost is the US willing to be #1.

When we look at one of NASA’s greatest accomplishments of landing on the moon, we know that Werner von Braun designed the rocket that got US men on the moon. Von Braun was one of the lead Nazi scientists helping Germany develop this very technology. Von Braun’s accomplishments were so grand that “von Braun was almost awarded the Presidential Medal of Freedom—until one of Ford’s senior advisors, David Gergen, objected to his Nazi past” (CIA Archives). The United States of America nearly gave the Medal of Freedom to a literal Nazi. Let that sink in.

So what is the relevance of “Operation Paperclip?” What does it matter if all these Nazis that were brought in to the US are now well into their 80s and are dying out (just like our survivors)? This matters because of the state of the US today. The leadership that we have, the very one that refused to denounce white supremacy, allows for a platform for neo-Nazism, continued ignorance, and hate. When we refuse to denounce such evils, we are accepting and acknowledging that part of our world history is being ignored and is doomed to be repeated.

In 2017, according to the ADL, anti-Semitic incidents rose by nearly 60%. I cannot separate a connection between Nazis being escorted to America, having gotten ‘off the hook’ for their Nazi war crimes, and the rise in anti-Semitism. These Nazis came to America, built lives, careers, had children and grandchildren. What do we think they taught their children? What messages were passed along from generation to generation? It is, of course, important to mention that not every person that emigrated to the US in the 1940s from Germany is a Nazi or even that those who came on “Operation Paperclip” still believe in Hitler’s “Final Solution.” But it is important to understand that a large immigration of Nazis to the US had the potential to leave a lasting legacy, which, indeed, it appears to have done – and it is a problem.

The world that we know is constantly evolving and changing every day. We all come from different backgrounds, and the stories that we choose to tell and the way that we tell them, matter. How we teach love and acceptance to our children and future generations matters. We have a duty to look out for one another, a message I hope is being practiced during this quarantine. We have a responsibility to remember and honor our histories to ensure “never again.”

This day means a lot to me and the Jewish people. I have been to Poland twice and have walked through the concentration camps that took the lives of so many. I marched with over 10,000 people, survivors and those ready to hear their stories, from Auschwitz to Birkenau. The second time I was there, 10 years ago to the day, one of our group leaders addressed our group at Majdanek death camp. At the end of her speech, she looked around to us and explained that the difference between us and our ancestors that were forced to be here, is that we get to leave.

About the Author
Valerie is an Olah Chadasha from Los Angeles, California. After graduating from the University of Colorado in Boulder, having received a degree in International Affairs, she moved to Israel to do a Masa program, Career Israel. After working in a Business Intelligence firm, she moved on to receive her Master's Degree from the Interdisciplinary Center in Herzliya with a degree in Conflict Studies and a Certificate in Middle Eastern Politics. Valerie currently works for the Tel Aviv Municipality in the Tourism department, Tel Aviv Global and Tourism. She has been living in Israel for nearly 6 years.
Related Topics
Related Posts
Comments