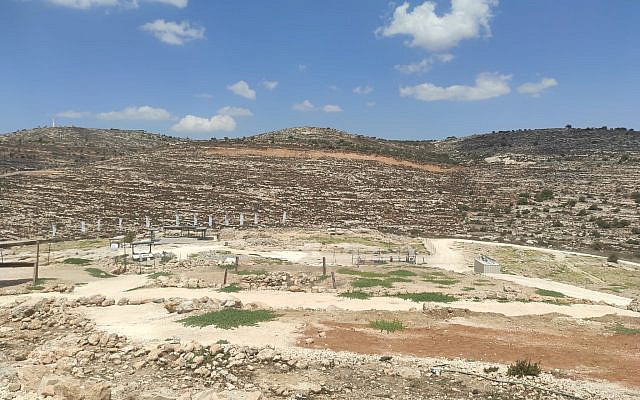 The famous story of Chana, which is read in the Haftara of the first day of Rosh HaShana takes place in Shilo as we read in Shmuel I 1:3:

This man (Elkana) would ascend from his city (Ramatayim-Zofim in Mt. Ephraim) year by year to worship and to sacrifice to God, Master of Legions in Shilo.

In Shmuel I 1:9-10, we see that this is the spot where Chana prayed for a child:

Chana rose after they had eaten in Shilo and after they had drunk. Eli the Kohen was sitting on the chair, near the doorpost of the Sanctuary of the Lord. And she was feeling bitter, and she prayed to the Lord, weeping continuously…

The Mishkan (Tabernacle) stood in Shilo for almost 370 years, from the days of Yehoshua (around the year 1258 BCE), 14 years after B’nai Yisrael arrived in the Land of Israel. As we see in Yehoshua 18:1:

The entire assembly of the Children of Israel gathered at Shilo, and set up the Tent of Meeting (Ohel Moed) there. The Land was now under their control.

The first person in relatively modern times to recognize the city of ancient Shilo in 1838 was Edward Robinson, an American Bible critic.

Recently, archeologists found five jugs which were fully intact that date back 2000 years. In addition, they found coins, a key and wooden dice.

Five years ago, archeologists found jugs that still contained grape seeds. The jugs were covered with debris that fell from the ceiling. The archeologists date these jugs back to when the Mishkan was destroyed, around 3000 years ago.

The archeologists are still hoping to find remnants from the Mishkan itself, not just the approximate place where it stood. For now they have found a large stone that may have been part of the Mizbeach (altar), a lot of vessels which seemed to have been smashed due to their status of impurity as well as animal bones which could have been part of the many sacrifices that were brought there. Since the Mishkan itself was a temporary structure, parts of it may have decomposed making it harder to find the remains.

Even after 100 years of excavations, archeologists have only covered about 5% of the area so there is still plenty more work to do.

Shilo generally gets 150,000 visitors per year who want to connect with the Biblical city, the site of the Mishkan, the holiest site until the Beit HaMikdash (Temple) was built, to see where Chana prayed and to be inspired.