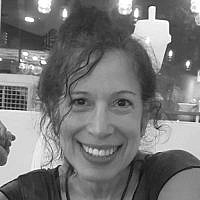 The Blogs
Sari Ellen
Novelist
Apply for a Blog
Advertisement
Please note that the posts on The Blogs are contributed by third parties. The opinions, facts and any media content in them are presented solely by the authors, and neither The Times of Israel nor its partners assume any responsibility for them. Please contact us in case of abuse. In case of abuse,
Report this post.

New Entry in the Hypocrisy Olympics

Welcome to the newest entry in the Hypocrisy Olympics, during which we confirm yet again that some deaths are accorded more outrage than others.

Currently, in Syria’s Yarmouk Refugee camp, Palestinians are being beheaded by Islamic State militants. But here in the United States, the deaths of those particular Palestinians aren’t getting much attention. Blaming Hamas, Islamic State or other like-minded groups for their viciousness is simply not in fashion. Apparently, it’s only fashionable to rant and rave about Palestinian suffering when you can twist this into propaganda against a designated scapegoat…. Israel.

The Hypocrisy Olympics is nothing new. The only news is that I’m still idealistic enough to be shocked.

Occasionally, my idealism gets encouraged. Though it took them almost a year, Amnesty International finally concluded that Hamas’s own weaponry caused “the deadliest incident” for Palestinians during Operation Protective Edge, in which thirteen Palestinian civilians died, eleven of them children. These were deaths caused by Hamas’s own rockets fired on Gaza.  Sometimes other observers, such as Human Rights Watch, will admit that Palestinians are treated brutally by forces that couldn’t be further from Israel. Personally, I think everyone who cares about the Mideast should have been livid in July 2014 when twenty Gazans demonstrating remarkable courage protested Hamas’s warmongering… and Hamas ruthlessly executed each and every one.

Right now, in the United States, there’s a movement against the fashion that leads to some American deaths being accorded more outrage than others. This movement’s slogan is “Black Lives Matter”. The movement arose because the deaths of darker-skinned Americans were routinely accorded less outrage in the United States, throughout her history, overall, than the deaths of those with less melanin in their skin.

Every life matters. Call me unfashionable, but I’m not okay with a situation in which people respond to any murder anywhere with the worldwide equivalent of a yawn.