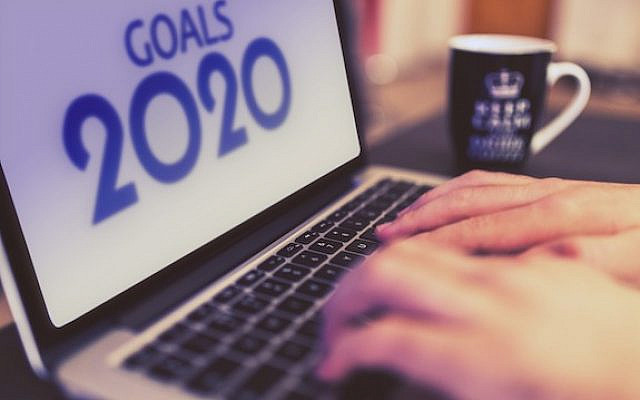 Jews are lucky. We get two New Year’s observances. And two chances to make New Year’s resolutions. Unfortunately, we also get two chances to break those vows. But all in all, it’s a pretty good deal, don’t you agree? Two opportunities each year to pause, reflect and embrace new beginnings.

I, for one, take the notion of resolutions very seriously. I may not be all that good at sticking to them, but I am very intent on thinking about them, writing them down, and trying to fulfill them.

January 1st resolutions, secular pledges, are generally filled with vows of self-improvement. I like many people make healthful resolutions. To lose weight. (Do people ever resolve to gain weight?) To eat better. To exercise more.

I also make “intellectual” resolutions. To improve my mind. To read more. Watch less TV. (Mid-pandemic, this one’s harder than ever to fulfill. But still, I’ll try.) Some people, even without a pandemic to spur them on, resolve to develop a new skill, learn a foreign language, or take up a new hobby.

There are “I want to be more productive” resolutions. In my case, I had plans in 2020 to begin writing a biography of a dear friend. Through no fault of his or mine, our plans collapsed. I had structured a lot of energy, time, and emotion into this plan and I haven’t quite recovered from the disappointment that we cannot go forward. I’m struggling to devise a Plan B “Big Project.” So, this category of resolution is particularly important for me in the New Year, but I’m not “there” yet.

I also always make “I want to be a better person” kind of resolutions. This category is good for January 1st but also is relevant for Jews  come the spiritual High Holy Days. Indeed, I re-visit it with special zeal throughout the Days of Awe.

As I age, I’m increasingly grateful to have two chances to focus — and re-focus — on my need for moral betterment. At 66, I confess I’m stuck in some bad habits and need all the reminders I can get not to speak lashon hara, not to be impatient, to practice kindness, and, in all ways, to be a better, more charitable person.

As Jews, we know that our traditions of making amends and vowing to improve ourselves annually on the High Holy Days harken to Biblical strictures, but I was curious about non-Jewish customs and did a little research.

Historians say ancient Babylonians made New Year’s resolutions 4,000 years ago as part of a mid-March religious festival tied to the planting of crops. During their 12-day observance of Akitu, they crowned new kings or reaffirmed loyalty to the current king, pledged obedience to their gods, repay debts, and returned borrowed objects. And in return, these ancient people hoped their gods would bestow favor on them for the coming year.

In ancient Rome, a similar practice evolved after Emperor Julius Caesar established January 1 as the start of the year (circa 46 B.C.A.). Believing that the god Janus symbolically looked back into the previous year and ahead into the future, the Romans offered sacrifices and made promises of good conduct for the coming year.

For early Christians, the first day of the new year became the solemn occasion to contemplate past mistakes and resolve to do better in the future. And although today’s celebrations are more a time for revelry, many people do still pause and reflect.

Yet, statistics show that while as many as 45 percent of Americans make New Year’s resolutions, only eight percent accomplish them!

I don’t know why making good habits are so hard to make. I’m obviously no psychologist or successful resolution-achiever! That’s why I’m so grateful, I get two chances each year to pause, reflect, and renew my vows to be a better person.

As for the Jewish people, I still say we’re the lucky ones, observing two New Year’s occasions to commit ourselves to work on personal improvement goals and more broadly on the continuation of tikkun olam.