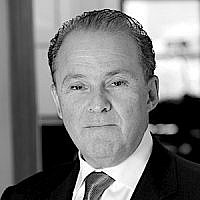 The Blogs
Robert Peckar
Apply for a Blog
Advertisement
Please note that the posts on The Blogs are contributed by third parties. The opinions, facts and any media content in them are presented solely by the authors, and neither The Times of Israel nor its partners assume any responsibility for them. Please contact us in case of abuse. In case of abuse,
Report this post.

Last Tuesday I arrived in Israel at 9:30 AM in the morning. Little did I know that less than one hour earlier two Palestinian terrorists had hacked and shot to death four rabbis and a policeman and had injured more than a dozen worshippers at the morning services inside their synagogue. While many stateside wished for my care – I was more concerned with the care of the Jewish people.

The safety of the Jewish people in the current climate of growing anti-Semitism disguised as criticism of Israel’s conduct of negotiations with the Palestinians or criticism of its conduct of the military operation in Gaza is frightening. The murder of the four holy people at prayer in their house of worship and a policeman who came to their rescue is a horrific violation of the rules of decent human conduct regardless on where you stand politically.  However, the thought that the Jewish people could return to circumstances of pre-Holocaust Germany in my lifetime is startling, frightening and wholly unacceptable yet, hardly impossible. The reporting of the murders in Jerusalem by two of the world’s most important news outlets provides insight into how the trend towards blatant anti-Semitism is facilitated by their coverage.

During the Israeli military operations in Gaza so much was made of the “asymmetry” of the conflict; namely, that State of Israel, with its highly regarded military, caused civilian losses that were not “proportional” to the losses suffered by Israelis. The coverage of the conflict in all forms of media and global communication were filled with sad images of Palestinian children lying dead after explosions attributed to Israeli strikes. That Israel’s actions were in response to thousands of rockets fired at its civilian population, that its actions included previously unheard of efforts to warn the civilian population of Gaza to get out of harm’s way (including cell phone calls to residents and small “roof knockers” dropped on their roofs to provide a final warning) and that Israel has offered the world proof that Hamas used its civilian population as pawns in its desire to create the very story that the news media reported of the victimhood of the Gazans is without any reasonable challenge. Yet, the world was fed a steady stream of terribly sad images of dead Gazan children day after day— images and reporting that provided anti-Semites with the fuel upon which to attack the Jewish state and the Jewish people with hateful words and, unfortunately in some countries, physical violence.

On the day of the murders in Jerusalem, Israel’s Economy Minister Naftali Bennett was interviewed on BBC following the interview of a Palestinian spokesman who was claiming that Jews were murdering Palestinians in Jerusalem. Mr. Bennett held up a photograph of a murdered Jew wearing a tallit (the prayer shawl) lying on the floor of the synagogue following the attack. The BBC interviewer directed him to lower the photograph with a statement that all too clearly discloses the attitude of the media, in general, and their practice to depict Jews as the aggressors and not the victims whenever possible. “We don’t actually want to see that picture,” the interviewer said, “if you could take that down.”

As it is now rather famously known, CNN showed its predilection to always depict Palestinians as the victims by first reporting in the words that run on the ticker below their live broadcast that “4 Israelis, 2 Palestinians dead in Jerusalem,”  without a mention that the “2 Palestinians” were the murderers. Compounding this inaccurate statement was a smaller text that put the words “terror attack” in quotation marks and attributed the then-known four Israeli deaths to Israeli police action!  In yet another failure to describe the event properly on the ticker, CNN superimposed a ticker reading “Deadly attack on Jerusalem mosque,” over an interview with Jerusalem Mayor Nir Barkat following the incident.

When the major news reporters viewed around the world cannot report the truth of what occurred accurately and fairly, why would one be surprised that anti-Semites who “report” gross lies and distortions on social media are able to do so with impunity and credibility?

How did these two instances happen?  Bad judgment?  Bad reporting?  I think not. I think these are two examples among many of the pervasive anti-Israeli perspective in the media that caused the involved writers and reporters to assume that the Jews were the perpetrators and the Palestinians the victims. It is a narrative that the media finds appealing. However, in finding every opportunity to cast Jews as the perpetrators of harm to Palestinians, they ignore the facts, ignore the contribution of Jewish values to the betterment of the world and instead dehumanize Jews in a way that that underlies the growing trend toward the acceptance of anti-Semitism as justified in too many areas of the world. The harmful results of such reporting are far more significant to the Jewish world than a media correction and apology can possibly repair.

It is time for the media in all its forms to recognize the impact of its words and images upon the growth of anti-Semitism and to change this course before it is too late.

About the Author
Robert Peckar is an attorney residing in New Jersey, USA. Aside from his professional practice as a leading international construction lawyer, he is actively involved in Jewish organizations, having recently spent four years as Chairman of Project Interchange, an education institute of the American Jewish Committee.
Related Topics
Related Posts
Comments