“Next year in Jerusalem!” They’re words we’re familiar with from the close of the Passover seder and the end of prayers on Yom Kippur. But this year — as we come to the end of the nearly month-long holidays season that begins with Rosh HaShanah — I want to propose a different prayer: next year in the routine! (לשנה הבאה בשגרה/L’Shana HaBa B’Shigra!) 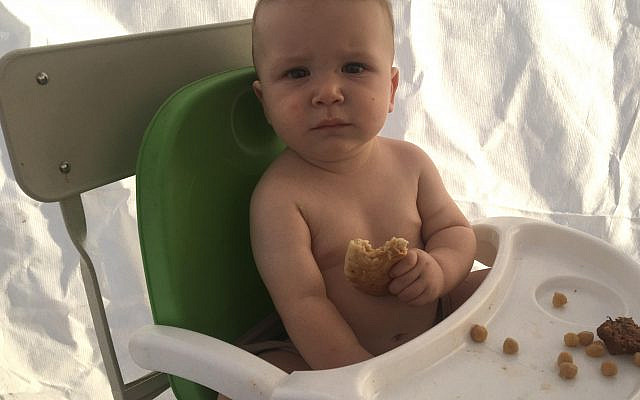 Our son in his first (guestless) Sukkah. With the long two-month break now between Jewish holidays, he’ll become a year old on the next one. (courtesy)

There’s really reason for hope. The week-long Sukkot holiday — which just ended here in Israel — is traditionally supposed to be the ‘season of our joy’ (זמן שמחתנו/zman simchateinu). But this year it was also the season of our fear, maybe even the season of our imprisonment with Israel choosing the holiday time to become the first nation in the world to go through a second COVID-19 lockdown. It’s been anything but a routine Sukkot, with some people testing the limits of Jewish law to come up with a Sukkah with the minimum allowable of walls in order to maximize air flow and thus the safety of people eating and celebrating together in it. Others, like our family, decided to keep safe by skipping having guests at all on this most guest-centric of all holidays. So our young son knew eating in a Sukkah on his first Sukkot, but did not experience either hosting or being a guest in one.

But it’s over now! Finally! The holidays are over! 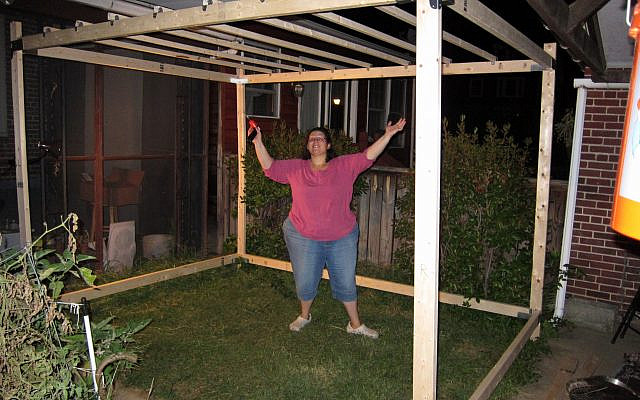 My wife Minna Bromberg building our Sukkah frame when we lived in Pennsylvania. The walls were yet to come. A Sukkah must have walls — but ‘how much wall?’ many have been asking in this Covid-19 season’ (courtesy)

It may seem strange to celebrate the end of holidays (although my American rabbi friends quietly, maybe even secretly and guiltily, breathe a sigh of relief every year to have a return to the time of routine; ‘מועדים לשגרה/moadim l’shigra’ they might even say in a play on words on the usual greeting on the moadim lesser holiday days of Sukkot). But this year the end of holidays (at least until two months from now with Hanukkah when our son will turn one year old!) may bring the reasons for hope I mentioned above.

First, the holidays were the time of greatest COVID-19 risk for Israel. The ultra-Orthodox especially, but also many more secular Israelis, just couldn’t resist the holiday call to socialize and pray amid groups and families. A government minister even got herself in trouble when she, despite a lockdown limiting travel to one kilometer (0.6 miles) from home, traveled 150 kilometers to pray and visit relatives on Yom Kippur. She came back with COVID-19. A Tel Aviv University study cited by Haaretz showed that Environmental Protection minister Gila Gamliel was not the only person to stray far from home — the rate of Israelis traveling more than 1.5 kilometers from home on the high holidays was twice the rate during the Passover holiday amidst the first lockdown.

But now that we are back to the routine we no longer have the call of religion, tradition and family to push people to violate the rules of social distancing and mask wearing. There’s real potential that we will finally be able to get COVID-19 under control.

There are other kinds of routine we can hope for — like the end to the heating up of some ‘civil wars’. Even in ‘the routine’ times there’s a lot of tension between the ultra-Orthodox and the rest of Israel, but it’s gotten so much worse during the lockdown — with so many feeling they’re having to pay the price for ultra-Orthodox resistance to complying with regulations.

I also pray for a return to routine in the country of my birth, the country run by the man with the $70,000 hairdo. I’ve found it nothing short of (both) surreal and terrifying to read the headlines from America in recent months. But the first Tuesday in November is coming close. We can hope. Hope for an America where people can talk to each other again, where politics will not divide people so profoundly. Hope even, specifically, for a cooling down of the civil wars in the American Jewish community which have Orthodox and non-Orthodox Jews split especially dramatically on issues related to Israel and to the presidential race (this ‘Jew-on-Jew’ tension is especially heartbreaking for me; it makes me want to cry).

There’s another kind of return to the routine I want to hope for at this time. This ‘return’ is different because it will be to a place that never was. A place where life can be routine even for the most marginalized of people like those who can not even get in their car without facing seven police bullets or who are smothered to death by a police knee even when they say they can’t breathe.

Next year in the routine!