The Blogs
Michael Unterberg
A guy in Efrat
Apply for a Blog
Advertisement
Please note that the posts on The Blogs are contributed by third parties. The opinions, facts and any media content in them are presented solely by the authors, and neither The Times of Israel nor its partners assume any responsibility for them. Please contact us in case of abuse. In case of abuse,
Report this post. 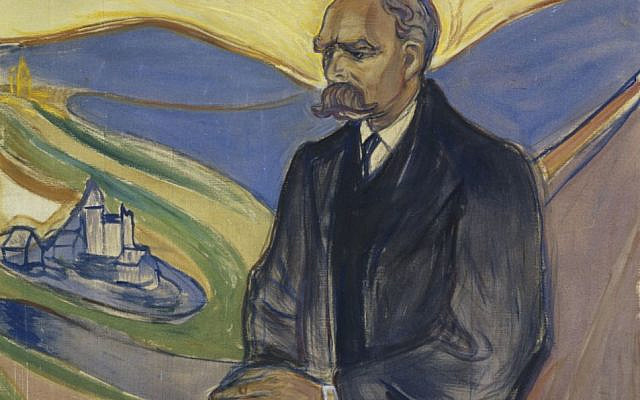 Portrait of Nietzsche by Edvard Munch, 1906 This is a faithful photographic reproduction of a two-dimensional, public domain work of art. (Wikimedia Commons)

Western political debate used to take place on a Locke vs. Hobbes spectrum. To oversimplify:

Commonly (but less helpfully) framed as left vs. right debates, people often used different elements of these positions. Jefferson argued for weaker central authority against Hamilton and Adams. In both crime and foreign policies, the Locke vs. Hobbes debate played a central role. Conservatives argued for the authority of good people to defeat bad people, while liberals argued for structural improvements which would enable inherent goodness to flourish. For examples of these different approaches in recent history, think of Reagan and W. Bush on the one hand as opposed to Carter and Obama on the other.

You may have noticed that I’ve been using past tense.

The idea was that in modern democracies these positions were meaningful and reasonable. By debating from these positions, and applying them to specific cases, we could reach compromises that embrace the best of both approaches and avoiding their pitfalls. In the Lincoln-Douglas debates, this took the form of hour long statements and responses. In our more recent media age, this has been reduced to two minute statements. Coherent reasoning and argumentation have become a thing of the past. But even this reduced form of the procedure may now be failing before our eyes.

Twitter wars, shouting matches and “cancelling” have become the zeitgeist. People are giving up on political argument as pointless. This is dangerous. The point of political argument used to be a search for common ground and compromise. Now, many assume that common ground can’t exist. Since one can convince an interlocutor to switch sides, political dialogue becomes useless. Posturing and virtue signalling become popular forms of expression. None of this makes any sense within the Locke/Hobbes framework. It belongs to a different philosophical orientation entirely.

To once again oversimplify:

From such a perspective, political expressions are not reasoned assertions worthy of debate. There are no norms within which debates can take place. Coherence itself becomes irrelevant. What matters are statements of mission and purpose. Expressions of ends justify all means.

To put this into a broader context that is even more oversimplified:

Was Nietzsche right? Is this a globally dark political moment that will pass? Or is this our entry into a new Dark Age? Is there anything we can do to direct the outcome? Some questions require more than philosophy to answer.